At a press conference on 2 December, Lao PDR announced it had finalised the domestic legislative procedures necessary to implement tariff reduction commitments for IT products covered by the agreements, starting from 1 January 2022. Deputy Director-General Anabel Gonzalez, Ambassador Chenggang Li of China and Mr Hiddo Houben, Deputy Permanent Representative of the EU mission, also participated in the press conference.

Lao PDR's schedules of commitments for the ITA and ITA Expansion were previously approved at meetings of the ITA Committee and the 2015 ITA Expansion Group on 17 November.

Through its participation in the ITA and ITA Expansion, Lao PDR will eliminate, as of 1 January 2022, duties on 358 out of 399 ITA-related products, providing immediate market access to foreign exporters of IT products. Furthermore, duties on 523 out of 571 products covered by the 2015 ITA Expansion will be eliminated.

Ambassador Latsamy Keomany of Lao PDR said: “On this occasion, on behalf of the Lao PDR’s Government, I would like to reassure members that we will make the utmost effort to fully and effectively implement all commitments to these agreements. We strongly believe that a conducive legal and policy framework will help us attract more trade and investment in ICT, thus contributing to achieving our digital economy and digital transformation agendas.”

He added: “Our ICT sector is at an infant stage. Therefore, joining the ITA agreements serves as a springboard or a means to nurture our ICT sector by bringing together consumers and producers to reap opportunities offered by the integrated world economy.”

She added: “Efficient, considering that Lao PDR only submitted its letter of intention on the 28th of June of this year, and that the ITA Committee and the ITA Expansion Group approved Lao PDR's respective schedules already on 17 November. I attribute this smooth and efficient process to the Government of Lao PDR's great determination, to the hard work of Lao PDR's negotiating team, to the solid support from ITA participants, and to the close cooperation between Lao PDR's team and the Secretariat.”

She continued: “Substantive, in that the market opening commitments undertaken by Lao PDR for its ITA and ITA II participation are indeed substantial. We should not forget that Lao PDR is an LDC WTO member, for which reason its additional strategic vision and political courage must be especially acknowledged and applauded.”

Ambassador Li (China) said that reductions and elimination of duties on ICT products in the digital era will help Lao PDR better integrate into global and regional value chains, increase economic efficiency and productivity and accelerate economic recovery from the pandemic. He hoped that Lao PDR's accession and the benefits from this accession will set good examples to other LDCs and encourage more to join the ITA and ITA Expansion.

Mr Hiddo Houben (European Union) noted the evidence indicating that countries joining the ITA increase their market share of IT products. The inputs and products of ITA are facilitators of the broader economy, especially in sectors such as tourism and infrastructure, he added. He also underscored that the benefits of this trade policy initiated by the Lao PDR Government will increase over the years.

The Information Technology Agreement (ITA) was concluded by 14 participants at the Singapore Ministerial Conference in December 1996. Since then, the number of participants has grown to 53, representing 82 WTO members which account for 97 per cent of world trade in IT products. The participants are committed to eliminating tariffs on IT products covered by the Agreement.

The ITA covers a large number of high-technology products, including computers, telecommunication equipment, semiconductors, semiconductor manufacturing and testing equipment, software and scientific instruments as well as most of the parts and accessories of these products.

At the Nairobi Ministerial Conference in December 2015, 24 participants concluded an ITA Expansion Agreement, which now has 26 participants, representing 55 WTO members and covering approximately 90 per cent of world trade in products covered by the ITA expansion.

In 2020, world exports of both ITA and ITA Expansion products totalled more than 20 per cent of global exports of manufactured products.

The press conference can be viewed here. 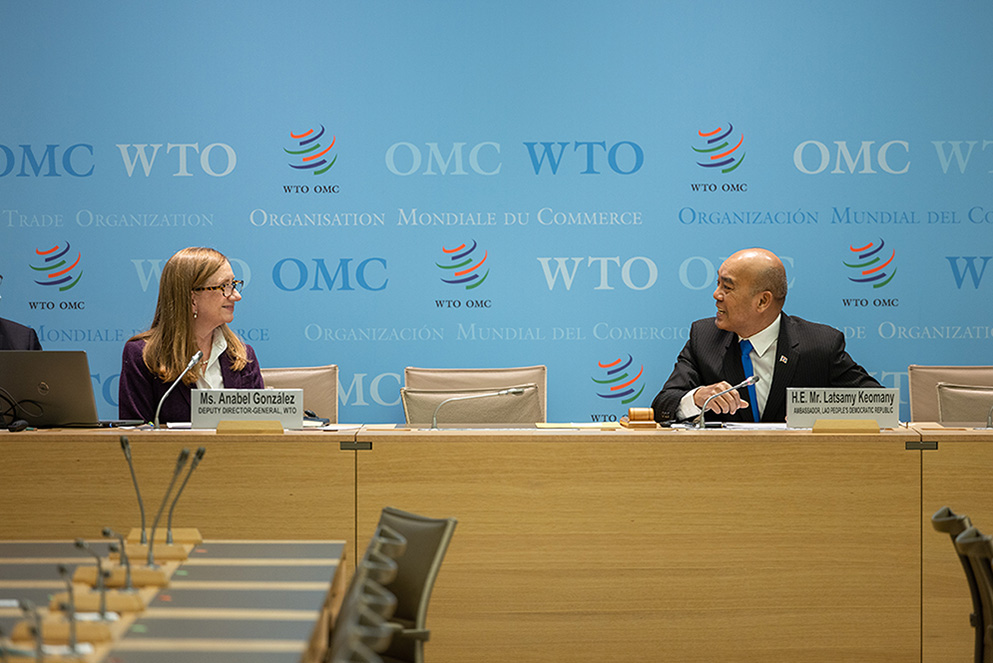