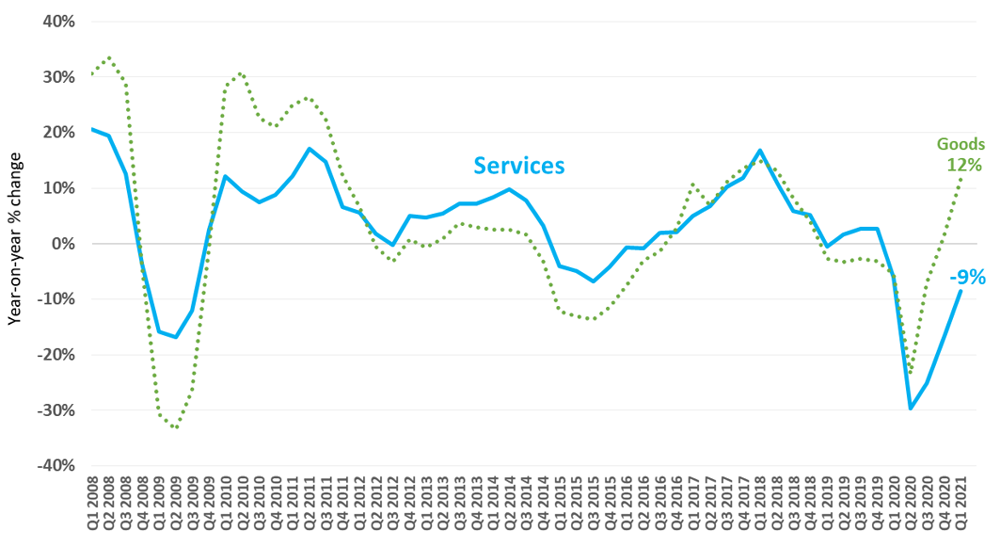 The latest figures for services contrast with the recovery in global goods trade, which grew 12% year-on-year in the first quarter of 2021 following a 9% drop in 2020.

Travel remains the most affected services sector, down 62% year-on-year both in 2020 and in the first quarter of 2021. Sharper declines were recorded in the first three months of 2021 in Asia (-67%). International travellers' expenditure was down 71% in Latin America and the Caribbean where, prior to the pandemic, travel receipts made up 43% of total services exports. Despite rollouts of vaccines in many advanced economies, the emergence of new virus variants and the reintroduction of travel restrictions and lockdowns are countering hopes of a summer recovery of international tourism.

Transport, Travel and Other Services trade 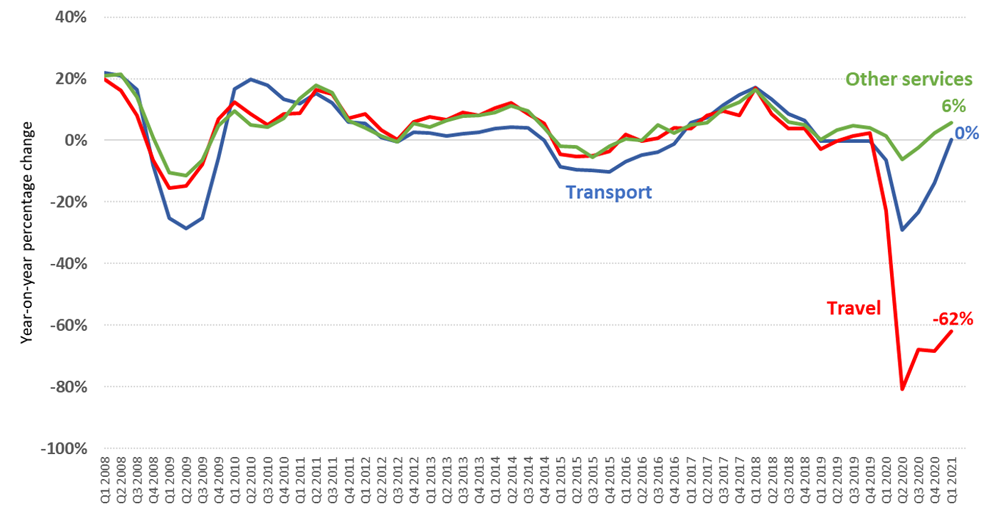 By contrast, transport rebounded quickly. World transport exports were still down 14% year-on-year in the fourth quarter of 2020 but bounced back to its 2020 value in the first quarter of 2021. Recovery was boosted by a high demand for goods coupled with surging freight rates due to port congestions, shipping delays and a global shortage of containers. In the first quarter of 2021, Asia's transport exports rose 28% year-on-year. Ocean shipping rates, which started to rise in the summer of 2020, are expected to remain high at least for the rest of 2021. Freight transport, the largest component of international transport, has helped to partly offset the sharp drop in passenger transport due to the pandemic.

“Other services” — such as construction, recreational, legal and financial services — increased on average by 6% year-on-year in the first quarter of the year. While construction lagged, with global exports down 2%, most other sub-sectors saw a return to growth, particularly audio-visual, artistic and recreational services, which was among the sectors most affected by COVID-19 related restrictions. Computer services continued its impressive growth, up 19% year-on-year.

Other services exports by main sub-sector 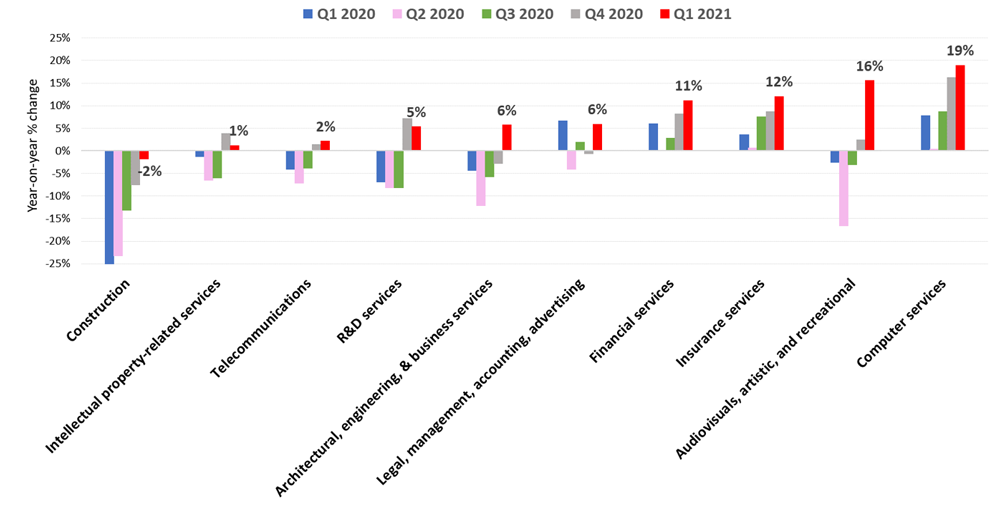 Latest figures further show that the cumulative values of services exports of most economies in the period of January-May 2021 remained well below their 2019 levels, with sharp contractions recorded particularly in Australia (-36%) and Uganda (-29%). In the United States and in the Russian Federation, services exports were down 19% and 17% respectively compared to values from two years ago. By contrast, China's services exports were up 23% boosted by transport exports, computer and business services. European countries showed an uneven performance. Luxembourg's services exports were up 13%, sustained by financial services, while large tourism exporters in the region continued to struggle. 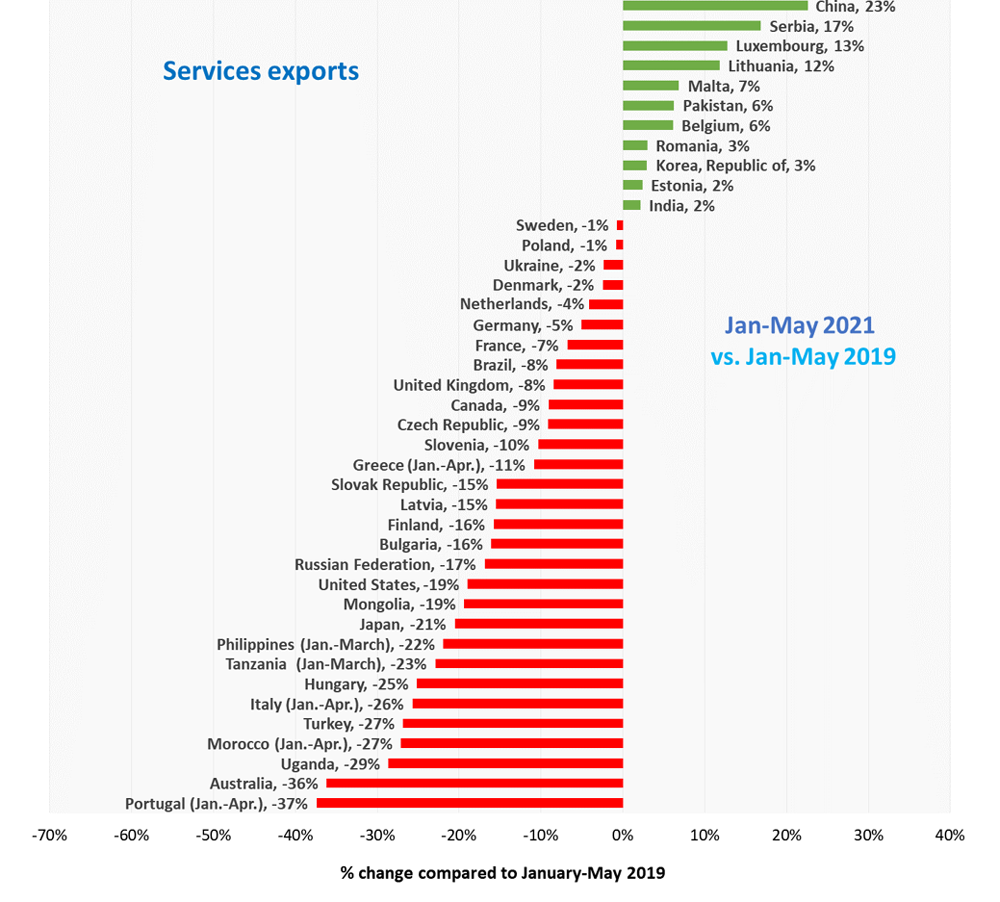