In her opening remarks to the one-day special event held at WTO headquarters, the Director-General noted that despite some positive developments, “too often, markets for food and agriculture still continue to function poorly.”

“It's increasingly clear that WTO rules have not kept pace with the challenges we face today, nor with developments on global markets,” she declared.

WTO members “will have to update the WTO rulebook if we're to respond effectively to the problems on global markets, and ensure WTO disciplines help us tackle the challenges we're facing both today and tomorrow.”

The retreat was organized in response to the Director-General's call for members to consider a new approach towards the WTO agriculture negotiations in order to overcome entrenched differences that have stymied progress in the talks.

Members were also divided into five break-out sessions to exchange views and brainstorm on two questions:  how should the WTO approach agriculture and what should be the key considerations going forward; and how can the WTO's agriculture negotiations be reinvigorated to achieve possible outcomes at the next Ministerial Conference.

The Director-General welcomed afterwards the “extremely constructive spirit” in both the plenary and breakout sessions and said the objective of “getting everyone out of their comfort zone” had been achieved.

“If we could bottle the spirit we had here today and take it with us, it would be a very good takeaway,” she told members.  “If we are able to do this, then I really have hope for us to go somewhere with agriculture.”

WTO members have been engaged in negotiations on agriculture trade for more than two decades.  The talks began in early 2000 under the original mandate of the WTO's Agreement on Agriculture.

Deputy Director-General Jean-Marie Paugam noted that, with the exception of the 2015 Nairobi Ministerial Decision on the elimination of export subsidies, “very few outcomes have been reached” in the negotiations to date.

“We hope that this retreat will generate ideas which would enable us to break the stalemate in the negotiations, once they resume in earnest,” he added.

In her opening remarks, the Director-General underlined the importance of agricultural trade in achieving many common objectives, from ending hunger to supporting sustainable agriculture.

She noted that the world has changed immensely over the past quarter of a century, with climate change and rapid population growth contributing to food security concerns.  Alongside these challenges, new opportunities are emerging such as the digitalisation of food and farming.

The Agreement on Agriculture, which came into force in 1995, represented an important step forward in members' efforts to work towards a fair and market-oriented agricultural trading system, the Director-General said.  The subsequent Nairobi Ministerial Decision on the elimination of export subsidies resulted in a sharp fall in export subsidies from almost USD 7 billion in 1999 to under USD 12 million in 2020.

Nevertheless, trade distortions and high levels of protection remain a major problem, she noted.  Persistent under-investment in research, infrastructure and other public goods have led to low and stagnating agricultural productivity in many regions.

In addition, total support to the farm sector has grown significantly, reaching USD 817 billion in 2019-21, of which only USD 207 billion took the form of budgetary spending on general services or payments to consumers, the Director-General noted.  Food export restrictions also continue to exacerbate the effect of price spikes on poor consumers in food-importing countries.

“We need to draw on the expertise of our resource persons — and brainstorm on what their knowledge and insights could mean for the design of future WTO rules,” she declared. “The WTO needs to do its part to drive progress towards the SDGs (UN Sustainable Development Goals), in particular the SDG on ending hunger, achieving food security and improved nutrition and promoting sustainable agriculture.  The WTO needs to factor people into its agreements and negotiations.”

Invited speakers at the morning plenary underlined the urgent need to address a food system under increased strain from climate-induced water insecurity and drought, environmental degradation, the war in Ukraine, and the lingering effects of the COVID-19 pandemic.  Food insecurity in Africa and its global repercussions were also highlighted by the speakers.

Máximo Torero, Chief Economist and Assistant Director General at the UN Food and Agriculture Organization (FAO), provided an overview of the current situation in terms of food security. Chronic undernourishment in the last two years has increased by 150 million people, while around 2.3 billion people in the world lack access to adequate food and the international community is far from achieving global nutrition targets.

“The numbers don't look good, and this is something that is happening across the world,” said Mr Torero, adding that trade under a universal, open and non-discriminatory multilateral system has never been more crucial to ensure food security and development, as well as to promote environmental sustainability.

Trudi Hartzenberg, Executive Director of the Trade Law Centre for Southern Africa (TRALAC), said Africa faces “fundamental food system vulnerability that has many dimensions. … There are growing concerns not only about the immediate crisis dimensions, but a deteriorating trend in food security, at least over the past decade.”

“We need a concerted effort, new approaches, innovative approaches to addressing food insecurity in Africa within the context of our own trade agenda, just as much as we need new approaches, new thinking, new solutions at the multilateral level,” she said.

Johan Rockström, Director of the Potsdam Institute for Climate Impact Research, noted a growing scientific call for a transformation of the current food production system that not only addresses health resilience and sustainability but also the stability of world trade.

“This is urgent," he declared.  “A lot of attention is required, not least from a WTO that can glue together the global resilience of the food system in the world for the future.”

Looking at the risks associated with water scarcity and its current and future impact on food security, Professor Quentin Grafton of the Australian National University highlighted that net food imports will increase in the next decades as a result of greater water stress situations “which are not going away”. In fact, he emphasized, water scarcity will get worse with climate change and rising populations.

“Unless we do something different, unless we move away from business as usual, not only in terms of CO2, methane and greenhouse gas emissions but also in terms of current agricultural trajectories and water extractions, we are going to be in serious trouble,” said Professor Grafton. “And the people who will suffer the most are those poor and vulnerable, particularly in poor countries and large food importing countries.”

In the afternoon plenary session, speakers looked at addressing food insecurity and strengthening the resilience of Africa's food system, the current landscape of agricultural support, and reforming WTO agricultural trade rules in light of contemporary challenges.

David Laborde, Senior Research Fellow with the International Food Policy Research Institute, said food security is “all about inequalities” and that opening up markets without thinking about technology transfer will not address sustainability issues that WTO members face.

He also urged members to keep in mind the specific challenges faced by small economies which are likely to get worse in the future and to consider not only responses to current problems in agricultural trade but also those that may need to be addressed in the decades ahead.

Given natural resource constraints, climate change, and various other shocks, accelerating the implementation of CAADP was critical in strengthening the resilience of African food systems and food security on the continent, he said.

Vangelis Vitalis, Deputy Secretary with New Zealand's Ministry of Foreign Affairs and Trade and a former chair of the WTO agriculture negotiations, said it was urgent that members come together and grapple with the challenges facing them.

“We have a war that is affecting agricultural trade,” he said.  “We have COVID. We have the risk of food security and famine. And of course we have a climate crisis. Clearly, as we look out onto the world now, the rules are fragmenting and they are less enforceable than they were.

“We can find common ground and, colleagues, it is urgent that we do so.” 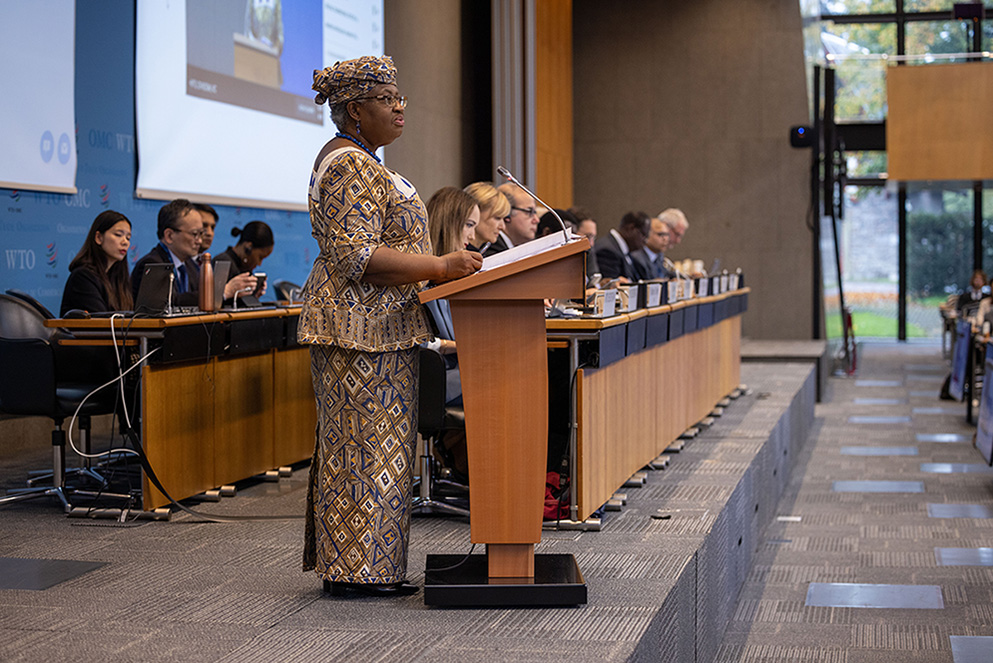