In her remarks to the opening plenary session, WTO Director-General Ngozi Okonjo-Iweala told participants that the future of trade will increasingly focus on three key issues that are the themes of this year's Global Review: sustainable development, digital connectivity and women's economic empowerment.

“The Aid for Trade initiative can and should aim to help develop critical trade infrastructure while supporting climate friendly, resilient and socio economically inclusive outcomes,” she declared.

A joint Aid for Trade at a Glance 2022 report issued today by the WTO and the Organisation for Economic Cooperation and Development notes that Aid for Trade commitments increased by 18 per cent in 2020, reaching an all-time high of USD 64.6 billion.  A total of USD 556 billion in Aid for Trade was disbursed between 2006 and 2020.

The report shows that 51 per cent of the Aid for Trade commitments made in 2020, worth about USD 33 billion, include climate related objectives. “Environmental issues increasingly feature in the development and trade strategies of developing and least developed countries,” the Director-General noted.

Aid for Trade disbursements for digital connectivity and e-commerce have increased by 23 per cent since 2018 but, at USD 487 million, still accounted for a modest 1 per cent of expenditure in 2020. “There's so much scope in this promising area to do so much more,” the DG said.

Women's economic empowerment “is an issue that I'm happy to say is starting to get the traction it deserves as a priority in development strategies,” she continued, with Aid for Trade programmes targeting women entrepreneurs and the constraints they face in trade facilitation, access to trade, finance, networking, trade promotion and other issues.

The Director-General issued a call for increased private sector involvement in trade-related development assistance to ensure recovery and resilience.  She suggested rebranding “Aid for Trade” as “Investment for Trade” in order to underline the importance of greater public-private sector cooperation.

“An essential part of what is being left out is the private sector,” the Director-General added.  “There are some opportunities staring us in the face during this crisis. We want to change the way supply chains work … by trying to shift the private sector supply chains more into these developing and least developed countries, to attract private sector help to lay down the appropriate infrastructure and help us bring them into the framework of global trade.”

The WTO-led Aid-for-Trade initiative encourages developing country governments and donors to recognize the role that trade can play in development. In particular, the initiative seeks to mobilize resources to address the trade-related constraints identified by developing and least-developed countries.

The purpose of the Global Review is to strengthen the monitoring and evaluation of Aid for Trade to provide an incentive to both donors and recipients for advancing the Aid for Trade agenda.

In her remarks to the opening session, International Trade Centre Executive Director Pamela Coke-Hamilton underlined the importance of ensuring that Aid for Trade delivers results for its ultimate beneficiaries.

“Aid for Trade is about making trade happen,” she said. “At the end of the day, it's about people, and if it doesn't translate into helping people, then everything we're doing comes to naught.”

Noting that the “poorest of the poor are hit the hardest” by the current polycrisis, Gerd Müller, Director General of the United Nations Industrial Development Organization, issued a call for a transition from free trade to fair trade.

“We must be willing to rethink what we do, how we act,” he said. “I'm convinced a world without hunger is possible, stopping climate change is possible. But only if we act now. The money is there … the industrialized world is spending trillions, not billions, trillions to support their economy. Developing countries cannot do this themselves. They need so much more global solidarity.”

In a video message to the opening session, OECD Secretary-General Mathias Cormann said Aid for Trade can be a tool to foster resilience through the current crises and help contribute to the economic resilience of developing and least developed countries.

“The sustainable expansion of global trade and investment is one of the most important drivers of further economic development, better international relations and a lifting of living standards all around the world,” Mr Cormann declared. “Indeed, this is precisely what Aid for Trade aims to do.”

Hyginus ‘Gene’ Leon, President of the Caribbean Development Bank, said the absence of capacity to recover from the COVID-19 pandemic and build resilience “is the fundamental issue that we need to face going forward.”

“Trade drives development. Without that, the ability to recover, the ability to generate resilience is not going to occur,” he noted.  But “without adequate and affordable finance, there is no way you can advance either the development or deployment of activities that can allow trade.”

Hani Salem Sonbol, Chief Executive Officer of the International Islamic Trade Finance Corporation, said his organization is focusing its support on those countries most affected by the ongoing crises.

“We can see the reoccurrence of crisis now is becoming more frequent,” he noted. “Any crisis that hits the world is definitely going to change the way we do business and to change trade.”

The opening session also saw the launch of Aid for Trade Global Review 2022, a WTO publication which looks into the results of the OECD-WTO monitoring and evaluation exercise. The report outlines priority areas for Aid for Trade, focusing on sustainable development, digital connectivity and women's economic empowerment.

The report finds that the COVID-19 pandemic has prompted a readjustment of Aid for Trade priorities, with both recipients and donors citing strategies developed specifically to support recovery from the continued economic impact of the pandemic. Digital connectivity emerged as an important factor for economic resilience during the pandemic. Along with e-commerce, these are areas where public–private partnerships are flourishing yet there is still considerable scope to expand Aid for Trade financing in this area, the report notes.

Aid for Trade has also taken on greater importance in the context of grappling with climate change. Environmental sustainability ranks high as a priority, particularly among donors, the report notes.  On women's economic empowerment, while countries are integrating gender issues into a wide range of instruments and policies, starting with their overarching development strategies, integrating gender into trade policy remains an ongoing challenge for most.

With more than 50 sessions scheduled during the three-day event, the Global Review will discuss the role of Aid for Trade in supporting women's economic empowerment, digital connectivity and how environmentally sustainable development can contribute to the desired development outcomes. The programme for the sessions is available here. 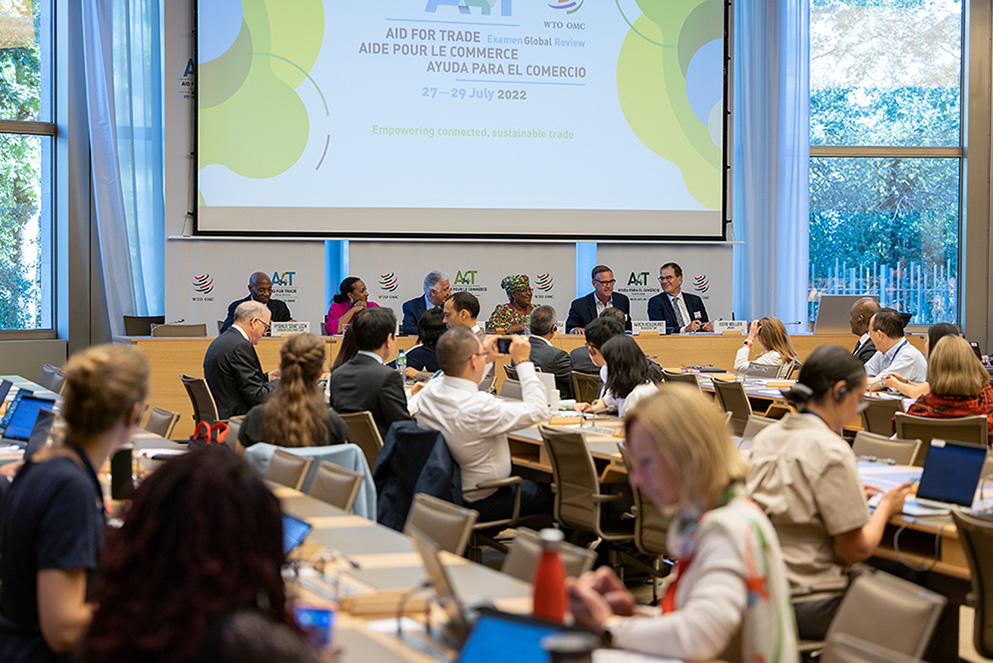