“The essential step now is to have the Agreement enter into force, so we need two-thirds of members to deposit their instruments of acceptance.  Our Director-General has set the goal of less than a year from the conclusion of the Agreement so that we can begin to experience the positive effects of the Agreement,” Deputy Director-General Angela Ellard, who served as moderator, said at the event titled “The WTO Agreement on Fisheries Subsidies: What Happened at the 12th Ministerial Conference (MC12) and What Comes Next?”  The event featured high-level representatives from developed and developing countries, civil society and the WTO Secretariat.

Members reached the binding agreement at MC12 in June, prohibiting certain subsidies to protect global fish stocks while recognizing the needs of fishers in developing and least-developed countries (LDCs).  The Agreement also commits members to engage in further negotiations to build on these disciplines. Furthermore, the Agreement's provisions on notification and transparency, as well as technical assistance and capacity building, provide the essential elements needed for it to operate in an enforceable manner, Clarisse Morgan, Director of the Rules Division at the WTO, said at the event.

Ambassador Adamu Mohammed Abdulhamid of Nigeria provided an update on his government's process to secure formal acceptance of the Agreement, underlining that its entry into force will benefit developing country members. “This global rule is going to set disciplines that will prevent certain IUU (illegal, unreported, and unregulated) fishing, overfishing and overcapacity. It will give most developing country members a level playing field to continue fishing activities, and the impact of that will massively improve their economy.”

Ambassador Pimchanok Pitfield of Thailand highlighted other important work ahead to implement the Agreement, including ensuring the prohibition of subsidies for IUU fishing. She explained: “We had a lot of experience in implementing IUU regulations in Thailand, and we know that while it is important, it is not an easy task.” She welcomed the ongoing work to establish the WTO fisheries funding mechanism and encouraged developing and LDC members to use the Fund as they implement the Agreement. As to further negotiations, the ambassador emphasized the need for more analytical work such as information on subsidy levels, and she underlined the need to maintain transparency and inclusiveness.

“There are basically two strands of parallel work that we have to be doing now,” Benedicte Fleischer, the Deputy Permanent Representative of Norway, said. Domestic processes for each WTO member to formally accept the Agreement and secure the Agreement's entry into force is one strand, she said, while working among members on issues related to the operation and establishment of the Committee on Fisheries Subsidies. Moreover, members need to engage to deliver a successful second wave of negotiations to enhance disciplines on overfishing and overcapacity.

Ambassador Santiago Wills of Colombia, who chaired the fisheries subsidies negotiations, applauded members in meeting UN Sustainable Development Goal 14.6 through the Agreement.  He highlighted the importance of flexibility among members as to the processes used to reach the MC12 outcome on fisheries subsidies. On the second wave of negotiations, he said that members will discuss how to proceed at a retreat on 10 October. “Members will take a step back and see what and how can we address this new mandate,” he said. “We need to see what members really want to do for this new wave.”

“What's important about this Agreement is that governments used the WTO as a forum to achieve something that they could not really have achieved anywhere else. They rose to the challenge,” Alice Tipping, Lead, Sustainable Trade, at the International Institute for Sustainable Development (IISD), said, explaining that the Agreement addresses subsidies that pose the most danger to global fish stocks. Civil society, she said, will continue to provide technical support to members in the second wave of negotiations and are ready to assist in the Agreement's implementation. A soon-to-be launched IISD toolkit will help governments survey their own policies and needs and think through the implementation of the Agreement.

More information on the Agreement is available here. 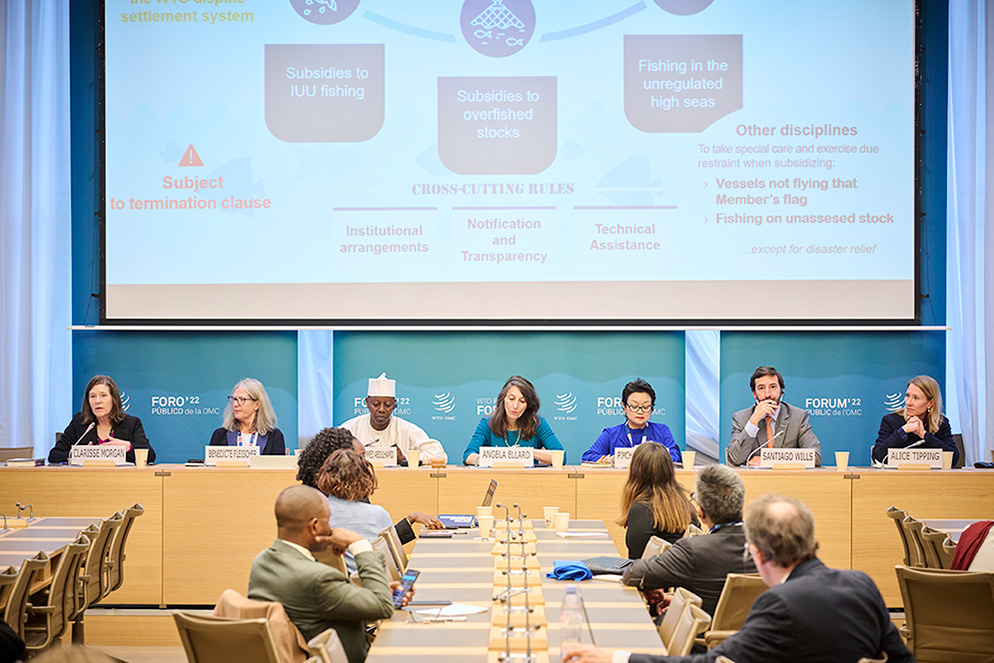