“Delivering results last month has generated expectations for more in the future,” said the DG, highlighting the many expressions of support she has received in recent weeks in her meetings with leaders from around the world for the unprecedented package of outcomes reached at MC12.

“We need to use this support and momentum by continuing our efforts to revitalize or reinvigorate all of the WTO core functions so that we can remain fit-for-purpose in a changing global economy and continue to deliver more for people around the world,” she added.

DG Okonjo-Iweala urged members not to be lulled into complacency following the MC12 success and to start implementing outcomes as soon as possible. On fisheries subsidies, she stressed that the historic agreement reached at MC12 will only be effective once it enters into force.

“The urgent situation of the oceans and our fisheries makes it imperative to get this done as soon as possible. This means that each member has to take action in accordance with its own system to formally accept the agreement and deposit its instrument of acceptance with the WTO Secretariat,” she said. “We normally take quite a long time to ratify agreements here, but I'm hoping that in this case, given the urgency of the situation, we should target months, not years to get this done.”

DG Okonjo-Iweala highlighted the importance given by leaders and ministers to the TRIPS decision, in particular regarding the possible extension of the waiver compromise to diagnostics and therapeutics as COVID-19 continues to spread across world. “I look forward to the discussions. On my part, I would like to encourage delegations to work expeditiously towards a mutually agreeable solution,” she said.

On food security, she noted the many expressions of praise for the Decision on World Food Programme (WFP) Food Purchases Exemptions from Export Prohibitions or Restrictions and the Declaration on the Emergency Response to Food Insecurity. She called on members “to work together to ensure that the WTO continuously and effectively contributes to addressing the current food crisis,” including by implementing both MC12 food security decisions.

She also referred to the joint statement issued on 15 July by the heads of the Food and Agriculture Organization, International Monetary Fund, World Bank Group, World Food Programme and the WTO, calling for urgent action to address the global food security crisis.

DG Okonjo-Iweala welcomed the recent signing of an agreement to send Ukrainian grain via the Black Sea, with the hope that it will work, especially for the 378 million people going hungry in the world. “We also look forward to this agreement facilitating trade in fertilizers and other inputs. We are strongly keeping our fingers crossed that this hopeful sign that we see will manifest itself in practical terms,” she said.

On agriculture, DG Okonjo-Iweala underlined members could not make headway at MC12 on a work programme and asked for “new thinking” moving forward to break the stalemate in the negotiations, which started in 2000. She supported the idea of organizing a members' retreat after the August break to devise new ideas.

“This will help catalyze new approaches and new ways of trying to do business in agriculture,” she said. “People have been waiting for more than two decades … and I think if we put our minds to it we can deliver, and we will deliver.”

As a sign of good will, DG Okonjo-Iweala asked members to reach a quick agreement to elect a new chair of the agriculture negotiations, following the departure of Ambassador Gloria Abraham Peralta of Costa Rica.

At MC12, members also agreed as part of the outcome document to work towards the necessary reform of the WTO. In this respect, DG Okonjo-Iweala reiterated “the need to develop common understandings about what reform is, build on that and act with a sense of urgency, including in resolving the Appellate Body issue, a matter that many leaders have raised.”

She thanked the United States for the outreach it is doing at the technical level on this particular issue. “Let us not forget that an organization that is fit for purpose is one that is responsive to its members in addressing the most pressing issues,” she added.

The chair of the General Council, Ambassador Didier Chambovey of Switzerland, reported that work is continuing after MC12. Some WTO bodies have already met and possible follow-up and implementation work on MC12 mandates for the second half of this calendar year have been discussed. This includes the Committee on Agriculture, the Committee on Sanitary and Phytosanitary (SPS) measures, the TRIPS Council and the Council for Trade in Goods.

“We should do what it takes to sustain the momentum,” said Ambassador Chambovey. “I therefore would like to encourage relevant WTO bodies to establish work plans — where feasible — based on MC12 mandates that could serve as yet another useful tool in our implementation pursuit.”

Looking beyond the August break, the GC chair said he intends to hold consultations on a range of matters, including WTO reform, the e-commerce work programme and moratorium, and the venue and date of the 13th Ministerial Conference.

On the MC13 venue, Ambassador Chambovey emphasized that the Republic of Cameroon and the United Arab Emirates have both offered to host the next Ministerial Conference. He urged members to take a decision as soon as possible “to afford sufficient time for the prospective host to prepare, and to help members manage the implementation of MC12 outcomes in an effective and result-oriented manner.”

DG Okonjo-Iweala closed her intervention by reminding members to actively engage and participate in the two upcoming flagship WTO events. First, the Eighth Global Review of Aid for Trade will take place on 27-29 July under the theme “Empowering connected, sustainable trade”.

“The Global Review is an important opportunity to deepen the discussion of how to take implementation forward of areas where we delivered outcomes at MC12 like fisheries subsidies and areas we know that we will have to address like climate change. What we're going through now, like with respect to climate change, should be a serious eye-opener for us all, and we should all be putting our minds to how trade can be part of the solution to this problem,” she said.

After the summer break, the WTO will again be organizing the Public Forum (27-30 September) under the theme “Towards a sustainable and inclusive recovery: ambition to action”. Many topics will be taken up, such as leveraging technology for an inclusive recovery, delivering a trade agenda for a sustainable future and framing the future of trade.

“We are going to see some interesting and different things at the Forum, a little bit different from what we used to do before, so I would really like all of you to actively participate in the discussions,”  she told members. 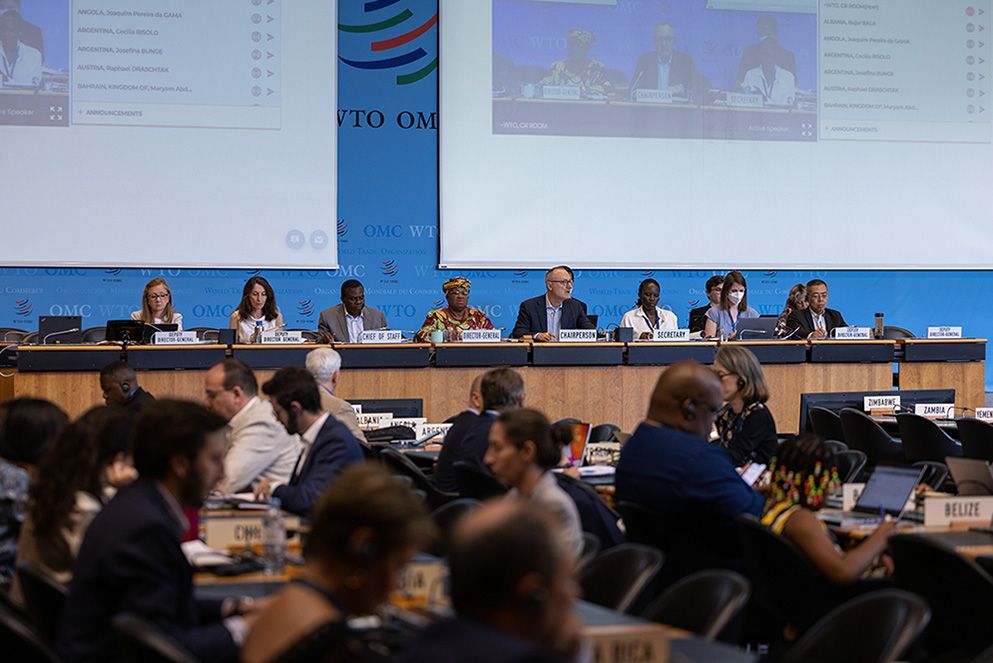