The Director-General noted that more than a third of the world's 1.8 billion young people live in fragile and conflict-affected states, where opportunities for education and jobs are extremely limited. She stressed that trade can play an important role in breaking the vicious circles of poverty, frustration and conflict in these countries and in increasing opportunities for young people.

DG Okonjo-Iweala said academic research has shown that the lower a country’s starting income levels, the higher the risk of civil conflict. She also highlighted that a fall in per capita GDP increases the probability civil hostilities will break out or resume, while rising per capita GDP reduces it.

DG Okonjo-Iweala added: “Poor countries that depend heavily on exports of primary commodities are typically at higher risk of conflict. … To the extent we are able to make trade an instrument to drive growth and diversification, we would be giving peace a better chance.”

The Director-General highlighted the launch of the “Trade for Peace Future Leaders” initiative, which seeks to increase youth engagement worldwide on trade and peace and to underscore the importance of youth in the future of trade and peacebuilding.

Ms Nicole Mensa, Special Assistant and Advisor on Gender at the WTO, said that it is critical for governments and policy makers to ensure that youth are able to benefit from trade in terms of employment opportunities and enhancing living standards, in line with the Marrakesh Agreement establishing the WTO. She noted that young people are the most affected by conflicts and wars.

She also underlined the importance of policies that support youth engagement in trade, such as measures aimed at promoting manufacturing and other sectors which can create jobs for young people.

The need to invest in youth and improve their capacity to trade was also highlighted by Dr Jan-Yves Remy, Director at the Shridath Ramphal Centre for International Trade Law, Policy and Services of the University of the West Indies

Dr. Annyssa Bellal, Executive Director of the Geneva Peacebuilding Platform, underlined the positive experience resulting from involving youth leaders in formulating peace agreements. She said that young people see interconnected issues in a way that is different from other constituents and can provide valuable support to how institutions approach peacebuilding.

The Public Forum session was co-organised by the Geneva Trade Platform of the Geneva Graduate Institute and the WTO. 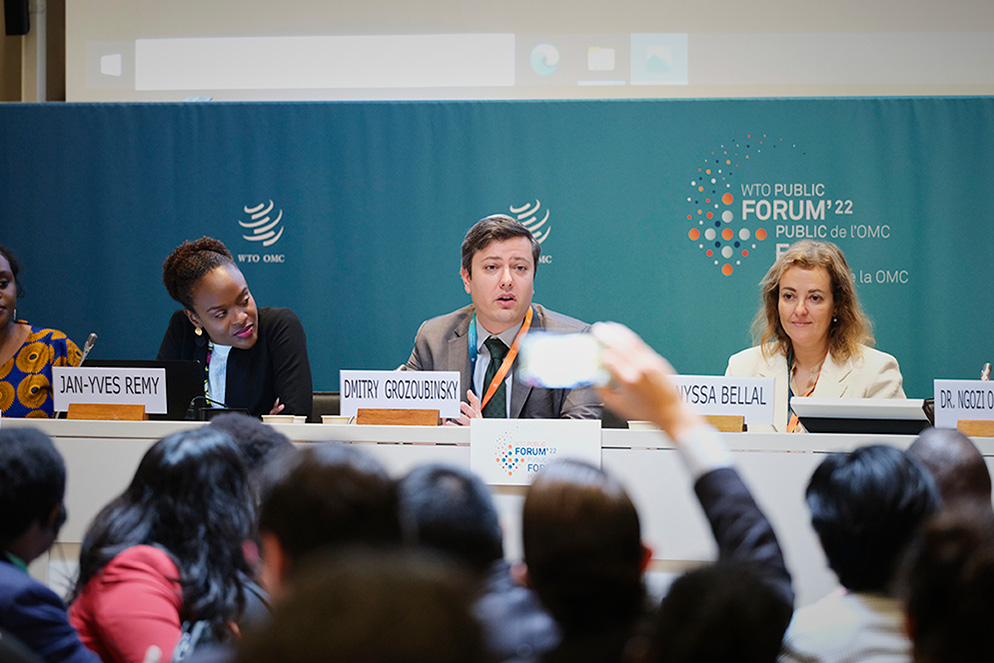