Costa Rica's Foreign Trade Minister, Manuel Tovar — representing the coordinating country of the Joint Initiative on Services Domestic Regulation — welcomed the three new participants as a sign of confidence in the value of the new disciplines and the benefits they will bring to services trade globally. “Members — from different regions of the world and with different regulatory capacity and approaches — all see benefits to reap in joining this outcome,” Minister Tovar emphasized.

A total of 70 governments(1) (69 WTO members and one acceding government) — accounting for over 92.5 per cent of world services trade — are now part of the deal on services domestic regulation. Announced in December 2021, the successful conclusion of negotiations is about improving the transparency, predictability and efficiency of licensing and authorization procedures, with a view to facilitating trade in services. Minister Tovar stressed that the newly agreed rules provide the necessary flexibility and policy space to ensure that they are compatible with each participant's economic and development objectives.

“As the second-largest economy of the Arab world, we are confident that being part of this outcome will support the United Arab Emirate's long-term trade policy strategy”, said the Assistant Under-Secretary at the UAE Ministry of Economy for Foreign Trade Affairs, Juma Mohammed Al Kait. Among his country's priorities, he cited “the creation of an environment conducive to trade and investment, the strengthening of the UAE's competitiveness in external markets and the development of international trade relations.” He added: “The implementation of the disciplines that this group of WTO members have agreed last year will help us to further align our framework of laws and regulations towards best regulatory practice.”

Georgia's Deputy Minister of Economy and Sustainable Development, Genadi Arveladze, noted that the new disciplines are “greatly aligned to the rules and procedures introduced in the domestic services regulatory practices in Georgia. Transparency and predictability as well as the maximum removal of the bureaucratic boundaries for services providers are some of the principal approaches in Georgia’s overall liberal trade policy.”

Timor-Leste's Coordinating Minister of Economic Affairs, Joaquim Amaral, noted the good progress that Timor-Leste has made on its WTO accession and emphasized that the implementation of a “clear, transparent and efficient regulatory framework is key to enabling services trade across borders". "This will help particularly the many small and medium-sized enterprises established in Timor-Leste”, he added. “We are confident that our participation in this outcome will not only further and consolidate reform towards regulatory practice; it will also signal that Timor-Leste — a least-developed economy — is ready to fully engage in the multilateral trading system,” the minister said. Timor-Leste is the first least-developed country to take part in the Joint Initiative.

Research published by the Organisation for Economic Co-operation and Development and the WTO found that the benefits from implementing the new rules on services domestic regulation would result in significant reductions in trade costs of USD 150 billion annually, particularly in some of the most crucial services sectors. Implementation is likely to generate broader trade benefits for economies, such as increased services trade and further participation in global value chains.

All the participating members have submitted their draft schedules outlining how the new disciplines on services domestic regulation will be incorporated in their respective commitments under the WTO's General Agreement on Trade in Services (GATS). At the press conference, Minister Tovar stressed that, in line with the commitment contained in the December Declaration, participants are on track to launch by the end of 2022 the WTO certification procedures to give legal effect to the outcome on services domestic regulation.

Further information on the Joint Initiative on Services Domestic Regulation can be found here. 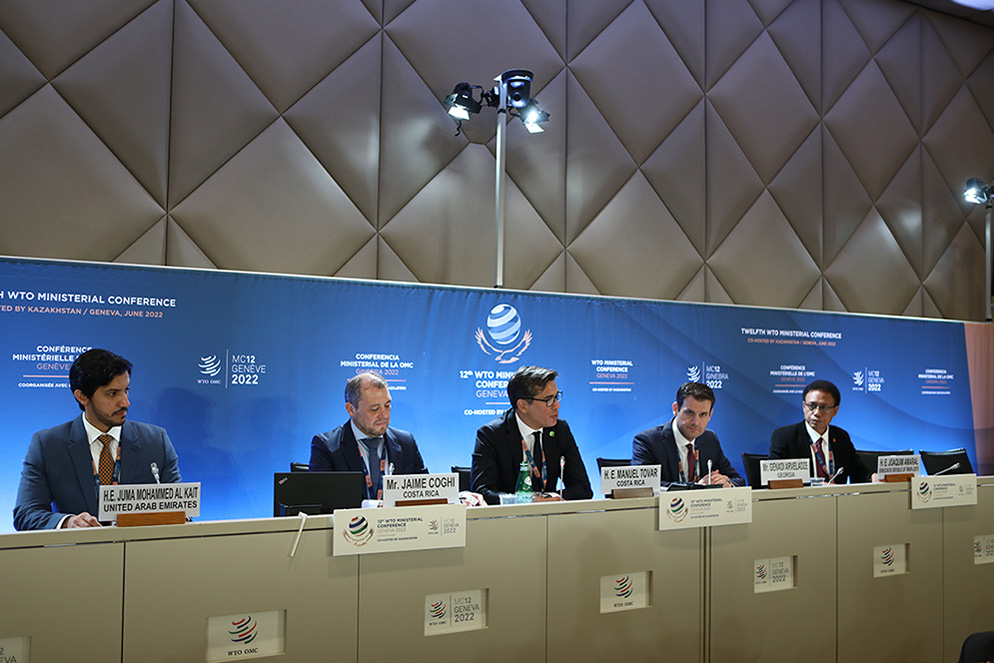