The meeting was the first opportunity for the whole membership to share their initial views on the  text forwarded by WTO Director-General Ngozi Okonjo-Iweala and shared immediately by Ambassador Gberie with all delegations after an informal meeting of the TRIPS Council on 3 May.

After an impasse of more than one year in the TRIPS Council, DG Okonjo-Iweala, working with Deputy Director-General Anabel González, supported an informal group of ministers' efforts to come together around what could be a meaningful proposal, without prejudice to their respective positions, that could provide a platform to be built upon by the membership.

In their discussions, the Quad adopted a problem-solving approach aimed at identifying practical ways of clarifying, streamlining and simplifying how governments can override patent rights, under certain conditions, to enable diversification of production of COVID-19 vaccines.

At the meeting, delegations took the floor to welcome the proposal as a positive development and thanked DG Okonjo-Iweala and DDG González as well as the four members of the Quad for their efforts in trying to find a way forward in this process. The majority of delegations said they needed more time to review the document internally before they could engage in a substantive discussion. The chair said he will hold further consultations in different configurations after the General Council meeting on 9-10 May on how to structure substantive discussions going forward.

While acknowledging that the proposal sets a solid basis for further discussion and could lead to a long-awaited and urgently needed outcome, some delegations noted that further engagement is needed to assess specific issues that remain in brackets in the outcome document. These members mentioned the eligibility threshold for developing members who have exported more than 10 per cent of world vaccine doses in 2021 and the issuing of a single authorization for eligible members to use the subject matter of multiple patents necessary for the production or supply of a COVID-19 vaccine as elements of the proposal that would require further discussion.

Some members also noted that clear reference should be made to ensuring that a potential future arrangement shall apply without prejudice to existing flexibilities under the TRIPS Agreement. The chair encouraged delegations to prepare for the upcoming discussions with a constructive and pragmatic attitude, particularly given the few weeks remaining before the 12th Ministerial Conference (MC12), to be held in Geneva on 12-15 June. He also asked members to reflect upon the fact that they have come a long way in a process that started in October 2020 and that only now has produced a text around which serious discussions, consultations and even negotiations can be held.

"The fact that a number of active delegations with divergent views have invested months of hard work to come together around a text means that we may now have a realistic chance to promptly reach an agreed outcome on this long-standing and very urgent issue," said Ambassador Gberie.

"It will not be easy, and it is in the nature of consensus that compromises are required on all sides and no one side will be entirely happy with the outcome. But an agreement by all members on a practical outcome on the role of IP in a pandemic will send a strong signal that despite all the differences, the WTO community can come together and highlight how the multilateral rules can help address this and future crises."

Members adopted the oral status report that will be submitted by Ambassador Gberie to the General Council. The text provides a factual overview of discussions held at the TRIPS Council since October 2020, both on the proposal by India and South Africa (IP/C/W/669/Rev.1) requesting a waiver from certain provisions of the TRIPS Agreement for the prevention, containment and treatment of COVID-19 and the proposal by the European Union (IP/C/W/681) for a draft General Council declaration on the TRIPS Agreement and Public Health in the circumstances of a pandemic.

The report incorporates a reference to the communication containing the outcome of the informal Quad discussions, which was circulated in document IP/C/W/688 for discussion in the TRIPS Council.

This means that the TRIPS Council has not yet completed its consideration of the revised waiver request and will therefore continue its consideration and report back to the General Council as stipulated in Article IX:3 of the Marrakesh Agreement.

In addition, the TRIPS Council will also continue in the same manner its consideration of the other related proposals by members.

To avoid interfering with the Council's preparations for MC12, members agreed to move the date of the next TRIPS Council meeting from 8-9 June, as it had initially been scheduled, to 6-7 July 2022. 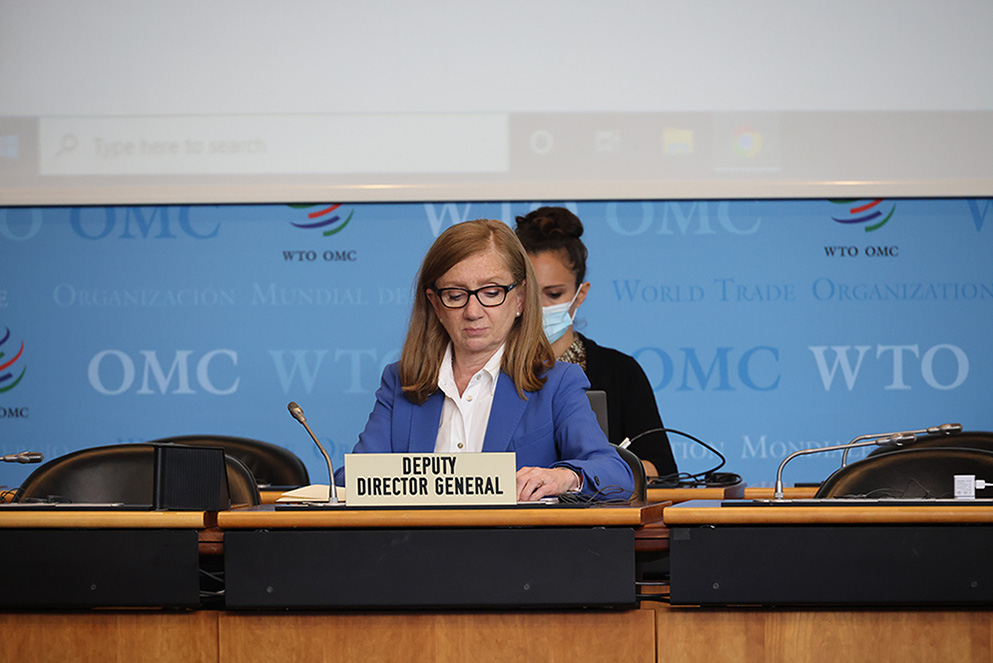