These revisions reflect a number of factors that weighed on the global economy in the first half of 2015, including falling import demand in China, Brazil and other emerging economies; falling prices for oil and other primary commodities; and significant exchange rate fluctuations.

Volatility in financial markets, uncertainty over the changing stance of monetary policy in the United States and mixed recent economic data have clouded the outlook for the world economy and trade in the second half of the year and beyond.

If current projections are realised, 2015 will mark the fourth consecutive year in which annual trade growth has fallen below 3 per cent and the fourth year where trade has grown at roughly the same rate as world GDP, rather than twice as fast, as was the case in the 1990s and early 2000s.

"Trade can act as a catalyst for economic growth. At a time of great uncertainty, increased trade could help reinvigorate the global economy and lift prospects for development and poverty alleviation. WTO members can help to set trade growth on a more robust trajectory by seizing the initiative on a number of fronts, notably by negotiating concrete outcomes by our December Ministerial Conference in Nairobi," Director-General Roberto Azevêdo said.

Global output is still expanding at a moderate pace but risks to the world economy are increasingly on the downside.  These include a sharper-than-expected slowdown in emerging and developing economies, the possibility of destabilizing financial flows from an eventual interest rate rise by the US Federal Reserve, and unanticipated costs associated with the migration crisis in Europe.

At the time of our last forecast in April 2015, world trade and output appeared to be strengthening based on available data through 2014Q4. However, results for the first half of 2015 were below expectations as quarterly growth turned negative, averaging ‑0.7% in Q1 and Q2. Recent trade developments are illustrated in Chart 1, which shows seasonally-adjusted, quarterly merchandise trade indices in volume terms (i.e. adjusted to account for fluctuations in prices and exchange rates) by level of development.1  Despite the quarterly declines in the first half of 2015, year-on-year growth in trade for the year to date remains positive at 2.3%.

Trade growth remains uneven across countries and regions as illustrated by Chart 2, which shows WTO merchandise trade volume indices by geographical region.  After a long period of stagnation, Europe recorded the fastest year-on-year export growth of any region in Q2 at 2.7%, followed by North America (2.1%), Asia (0.6%), South and Central America (0.4%) and Other Regions (-1.0%, including Africa, the Commonwealth of Independent States and the Middle East).  Disparities between regional growth rates was stronger on the import side than on the export side, with positive growth of 6.5% in North America, 3.1% in Asia and 1.6% in Europe, and declines of 2.3% in South and Central America and 3.1% in Other Regions. 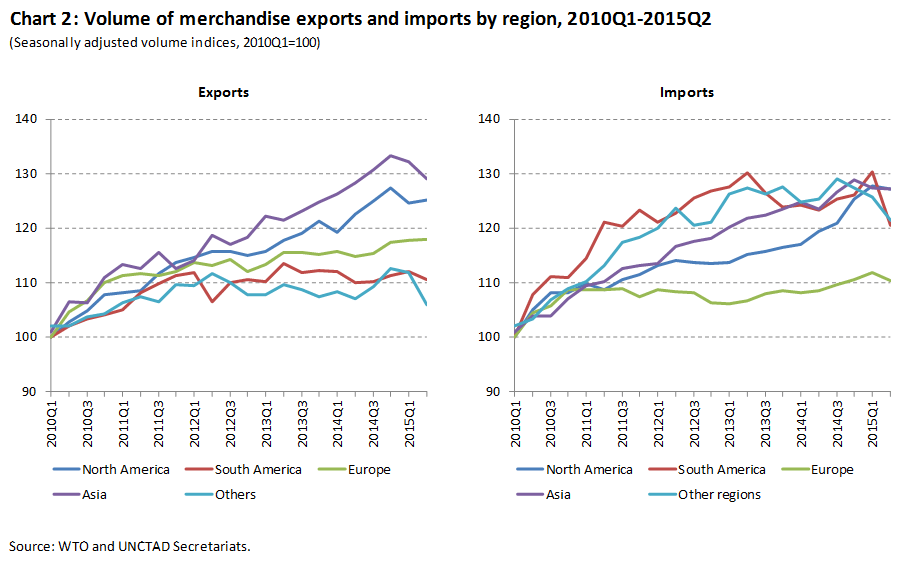 The strongest downward revision to the previous export forecast for 2015 was applied to Asia, where our estimate was lowered to 3.1% from 5.0% in April.  This is mostly due to falling intra-regional trade as China's economy has slowed.  The downward revision to Asia on the import side was even stronger, from 5.1% to 2.6%, partly due to lower Chinese imports which were down 2.2% year-on-year in Q2 (non-seasonally adjusted data).  The product composition of China's merchandise imports suggests that some of the slowdown may be related to the country's ongoing transition from investment to consumption led growth.  Large year-on-year drops in quantities of imported machinery (-9%) and metals (iron and steel -10%, copper ‑6%) were recorded in customs statistics for August, while strong increases were recorded for agricultural products including cereal grains (+130%) and oilseeds (+33%). 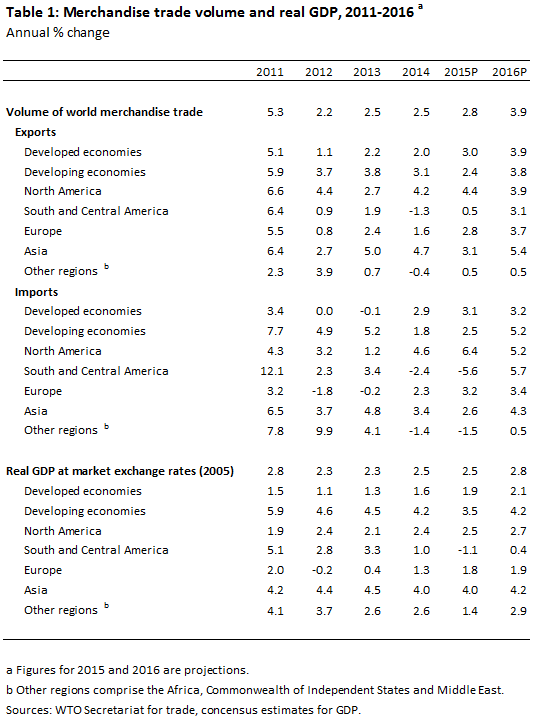 Another noteworthy revision relates to the import forecast for South and Central America in 2015, which was lowered to -5.6% from -0.5% in April.  Much of this reduction can be attributed to adverse economic developments in Brazil, which has been simultaneously hit by a fiscal crisis, a financial scandal involving the country's largest company, and falling export prices.  Brazil's merchandise imports in Q2 were down 13% year-on-year compared to the same period in 2014.  A rebound in imports of South and Central America is expected in 2016 as Brazil's GDP growth stabilizes and its imports start to recover. Other countries in the region should also see imports accelerate as their economies pick up next year. The size of the rebound in 2016 is also partly explained by the fact that future growth will be proceeding from a lower base following the steep decline in 2015.

If the slowdown in emerging markets worsens the revised forecasts in Table 1 could still prove to be overly optimistic.  In particular, a slower rebound from recent declines in developing economies' imports could shave half a percentage point off of global trade growth in 2015.

Finally, nominal merchandise trade statistics sometimes provide a better indication of current trade trends than statistics in volume terms since the former are generally timelier. These are illustrated by Charts 3 and 4.  However, trade statistics in dollar terms are highly sensitive to fluctuations in prices and exchange rates and should be interpreted with caution.

Trade values in dollar terms have declined in most countries since last year and were down roughly 12% year-on-year in July at the world level. This is partly the result of a strong general appreciation of the US dollar over this period (+15% in nominal effective terms against major currencies according to the Bank for International Settlements). As Chart 3 shows, there is generally an inverse relationship between world trade values in current dollar terms and the value of the US currency.  For example, Germany's exports and imports were both down 14% year on year in dollar terms in July, but they were up 6% in euro terms. 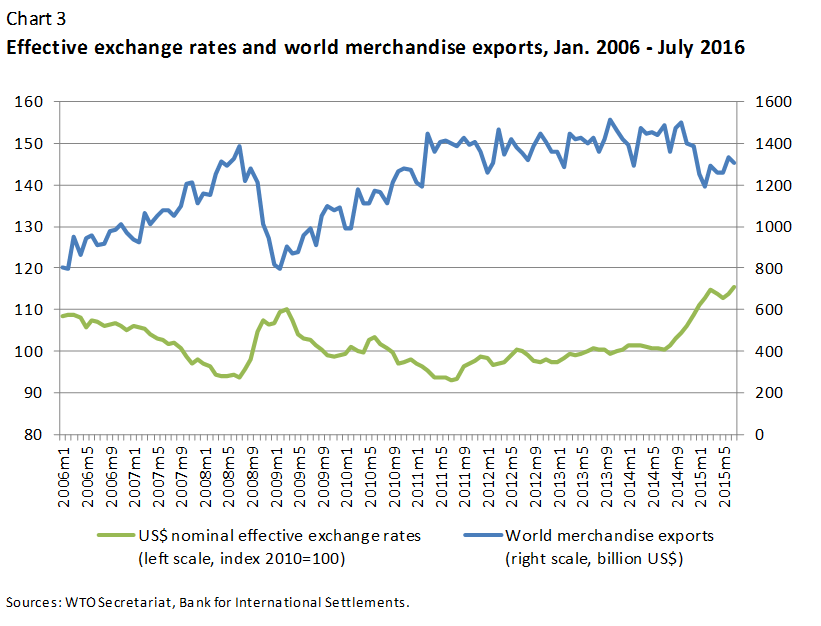 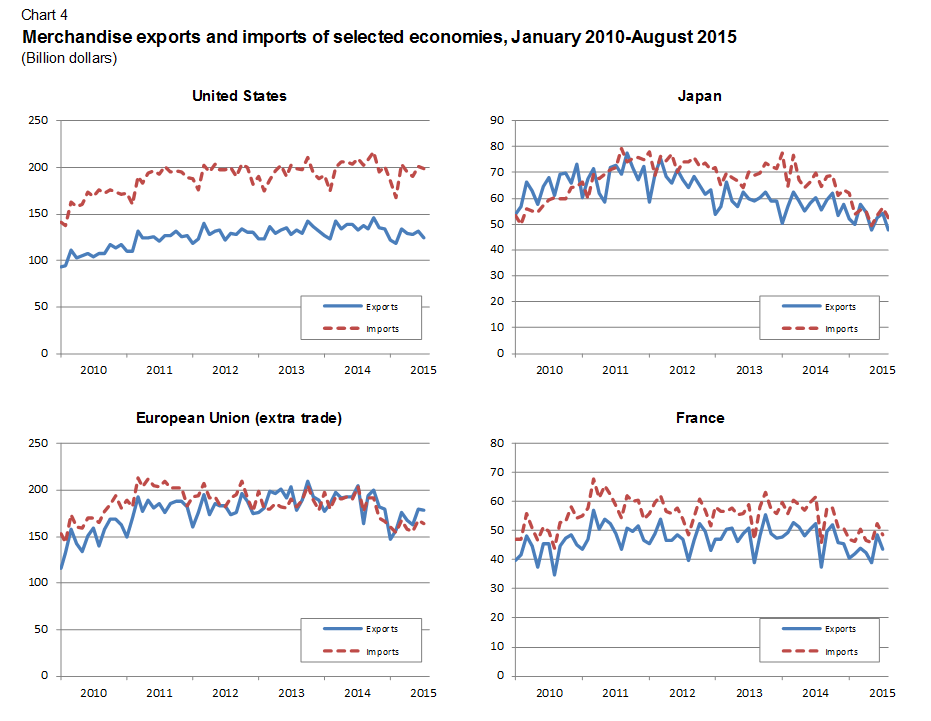 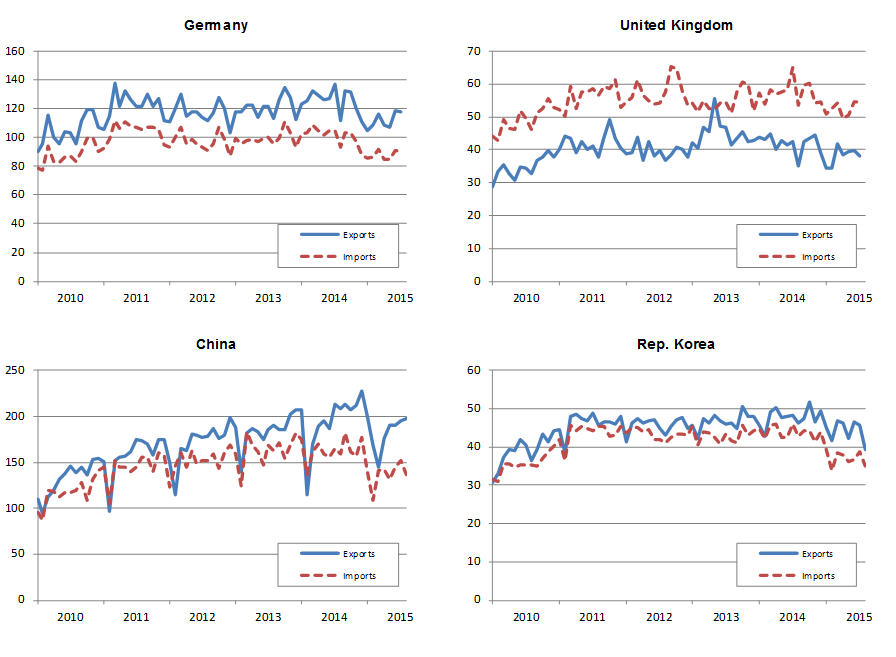 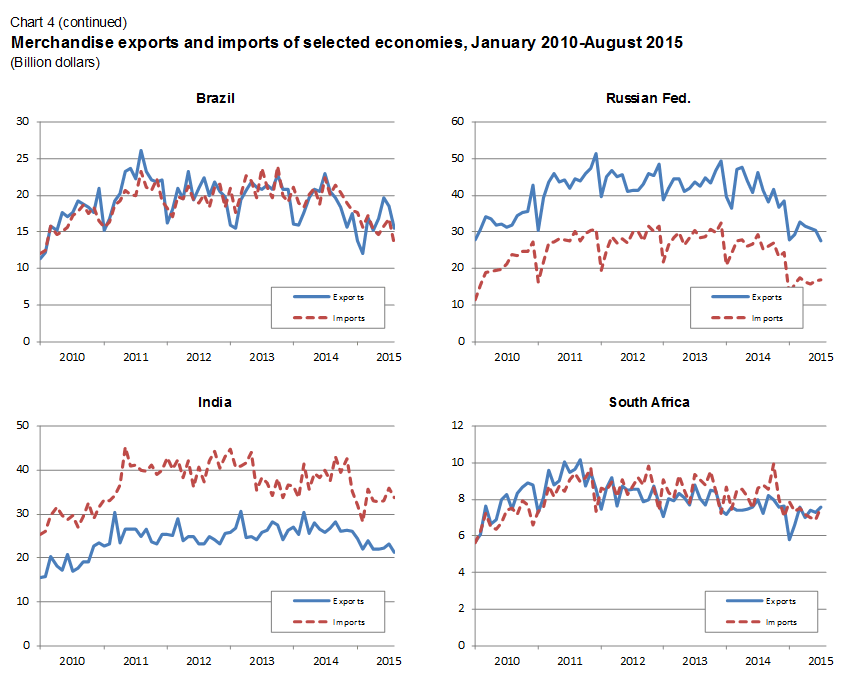 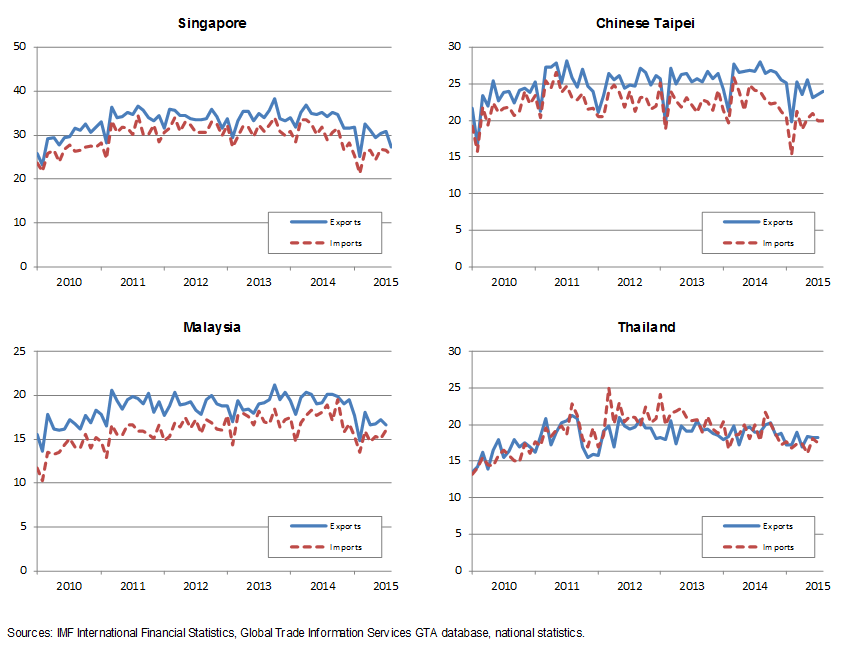 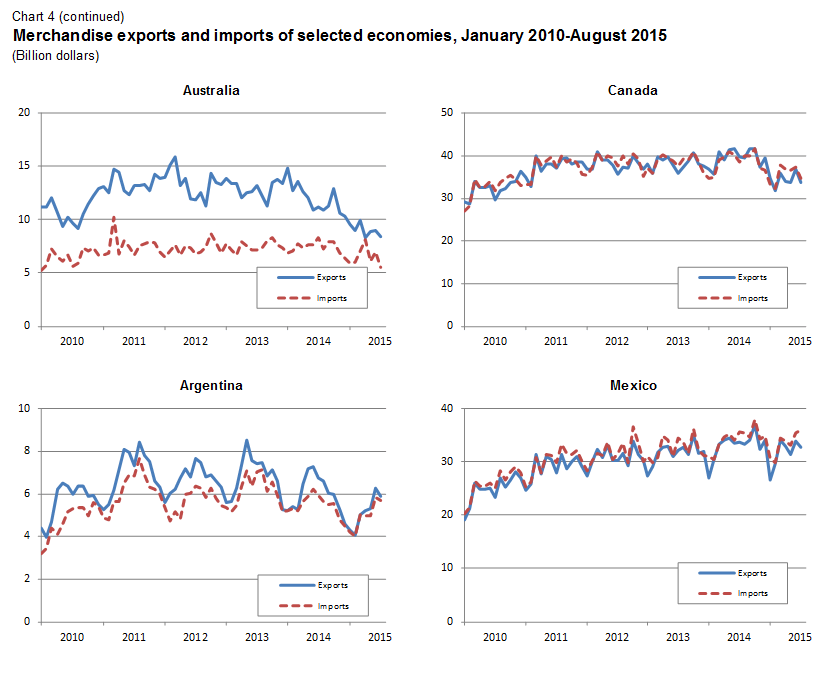 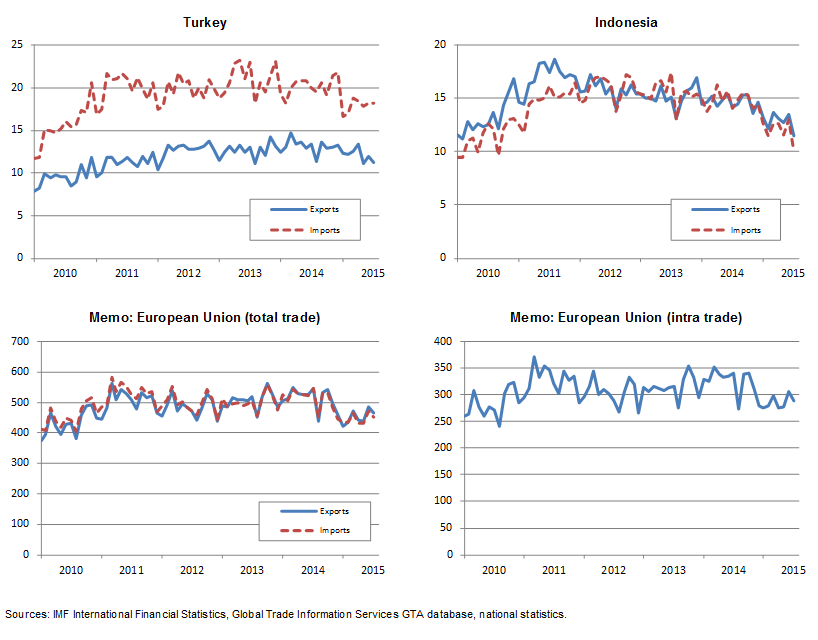 1. Data are sourced from WTO short-term trade statistics, which can be downloaded here. back to text

2. The WTO does not produce its own GDP figures, relying instead on other organizations’ estimates, which are re-weighted according to WTO country groups at market exchange rates. back to text