The volume of merchandise trade shrank by 3% year‑on‑year in the first quarter according to WTO statistics. Initial estimates for the second quarter, when the virus and associated lockdown measures affected a large share of the global population, indicate a year‑on‑year drop of around 18.5% (Chart 1). These declines are historically large, but could have been much worse. The WTO's 20 April annual trade forecast, in light of the large degree of uncertainty around the pandemic’s severity and economic impact, set out two plausible paths: a relatively optimistic scenario in which the volume of world merchandise trade in 2020 would contract by 13%, and a pessimistic scenario in which trade would fall by 32%. As things currently stand, trade would only need to grow by 2.5% per quarter for the remainder of the year to meet the optimistic projection. However, looking ahead to 2021, adverse developments, including a second wave of COVID‑19 outbreaks, weaker than expected economic growth, or widespread recourse to trade restrictions, could see trade expansion fall short of earlier projections.

"The fall in trade we are now seeing is historically large – in fact, it would be the steepest on record. But there is an important silver lining here: it could have been much worse,” said Director‑General Roberto Azevêdo. "This is genuinely positive news but we cannot afford to be complacent. Policy decisions have been critical in softening the ongoing blow to output and trade, and they will continue to play an important role in determining the pace of economic recovery. For output and trade to rebound strongly in 2021, fiscal, monetary, and trade policies will all need to keep pulling in the same direction." 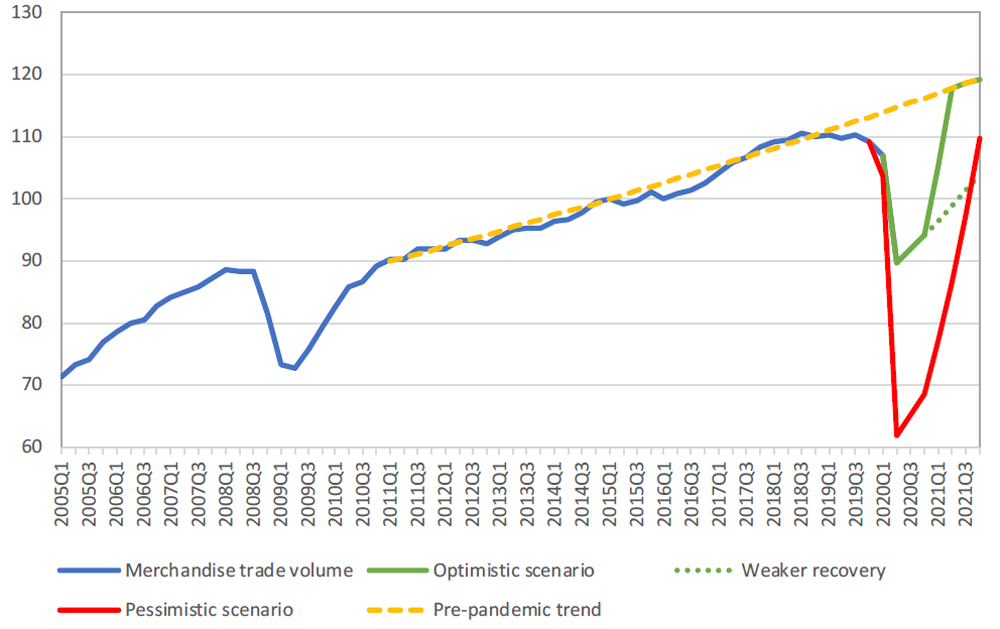 In light of available trade data for the second quarter, the April forecast’s pessimistic scenario, which assumed even greater health and economic costs than what had transpired, appears less likely, since it implied sharper declines in the first and second quarters.

The COVID‑19 pandemic and associated containment efforts intensified in the second half of March. Strict social distancing measures and restrictions on travel and transport were fully in effect in most countries throughout April and May, and are now increasingly being relaxed. These developments are reflected in a variety of economic indicators which, taken together, suggest trade may have possibly bottomed out in the second quarter of 2020. Global commercial flights, which carry a substantial amount of international air cargo, were down nearly three quarters (‑74%) between 5 January and 18 April, and have since risen 58% through mid-June (Chart 2). Container port throughput also appears to have staged a partial recovery in June compared to May (Chart 3). Meanwhile, indices of new export orders from purchasing managers' indices also started to recover in May after record drops in April (Chart 4). It is useful to keep in mind that these rebounds follow historic or near-historic declines, and will need to be monitored carefully before drawing any definitive conclusions about the recovery.

Looking ahead to next year, a slower-than-expected pace of economic recovery would weigh on trade growth. This possibility is illustrated by the dotted green line in Chart 1, which would see trade growth for 2021 come in at closer to 5%, which would leave it well below the pre-pandemic trajectory. On the other hand, a quick return to its pre-pandemic trajectory would imply trade growth in 2021 of around 20%, in line with the April forecast’s optimistic scenario. Monetary, fiscal and trade policy choices will play a significant role in determining the pace of recovery.(1)

The outlook for the global economy over the next two years remains highly uncertain. This is reflected in the range of GDP estimates from other international organizations, in some cases relying on multiple scenarios (Table 1). The World Bank, OECD and IMF have all released forecasts showing significant slowdowns in global trade and GDP; all are broadly consistent with the WTO's forecast for the current year. The World Bank's recent forecast would see global output decline by 5.2% in 2020, falling between the WTO's optimistic and pessimistic range. Other international organizations' GDP forecasts for 2020 are also increasingly negative, even as their trade projections stay roughly in line with the WTO's optimistic scenario. These estimates imply a less negative trade response to declining GDP growth than was observed during the global financial crisis of 2008‑09.

Table 1: Summary of recent forecasts for world GDP and trade 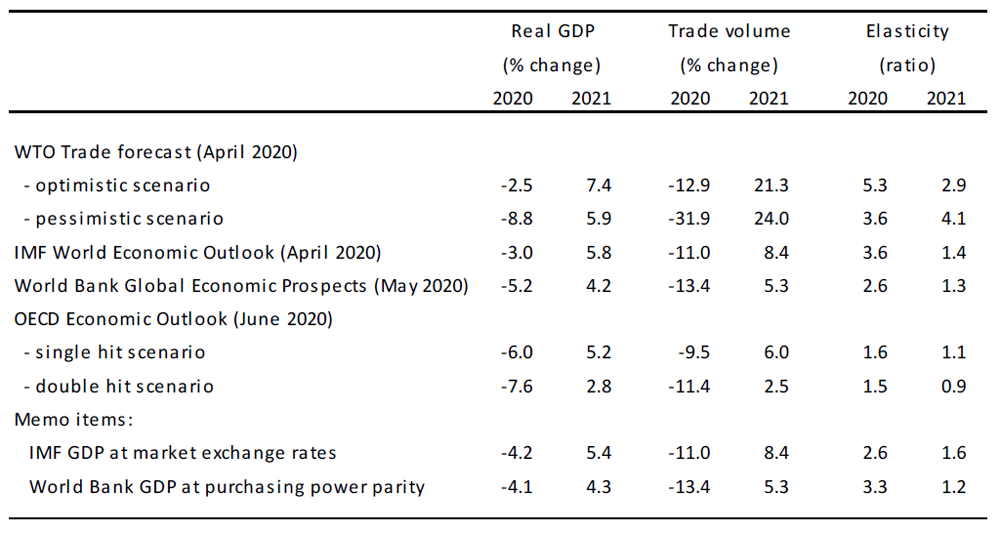 The responsiveness of trade to changes in income can be measured by the ratio of the growth of merchandise trade volumes to real GDP growth at market exchange rates, also referred to as the income elasticity of trade. The implied elasticity under the WTO's optimistic forecast for 2020 was 5.3 – in line with that seen during the financial crisis. However, if world GDP instead contracts by the World Bank's estimated 5.2% with a trade decline of 13.4%, the elasticity would only be 2.6.(2) Lower elasticity implies trade holds up better for a given fall in income.

There are several reasons why trade might respond less to changes in GDP than it did during the financial crisis. First, fiscal and monetary policies have arguably been rolled out more quickly and on a larger scale in the current crisis than they were in 2008‑09. The WTO forecast scenarios did not include an attempt to model either set of policy responses, since, at the time, these policies were just being introduced. Second, income support to households and expectations that the pandemic would eventually ease may have encouraged consumers to maintain consumption levels at a higher level than expected. Finally, much of the decline in output has been concentrated in non‑tradeable services such as hospitality, personal services and entertainment, which tend to be less import‑intensive than manufacturing.

Although purchases of consumer durables such as automobiles fell sharply earlier in the crisis (Chart 5), other economic sectors have shown signs of resilience in recent weeks. Sales of consumer electronics have thus far held up better than might have been expected, supporting international trade in these products. For example, according to China's customs statistics, the country's exports of automatic data processing machines, including computers, were up 30% year-on-year in US dollar terms in April. Anecdotal evidence similarly points to strong demand for computer and information technology services, which have facilitated working from home during the crisis.

Automobile sales have also rebounded from recent, though admittedly extreme, lows. For example, sales of cars in China were up 5% year‑on‑year in May after falling 79% in February. Car sales in Western Europe and the United States were still down sharply in May compared to last year, but declines were smaller than in the previous month. Increased purchases of consumer durables could be seen as a bellwether signalling renewed consumer confidence as lockdowns are lifted and economies start to revive. They will thus be closely monitored in the coming months.

Chart 2: Global commercial flights per day tracked by FlightRadar
(number of of flights) 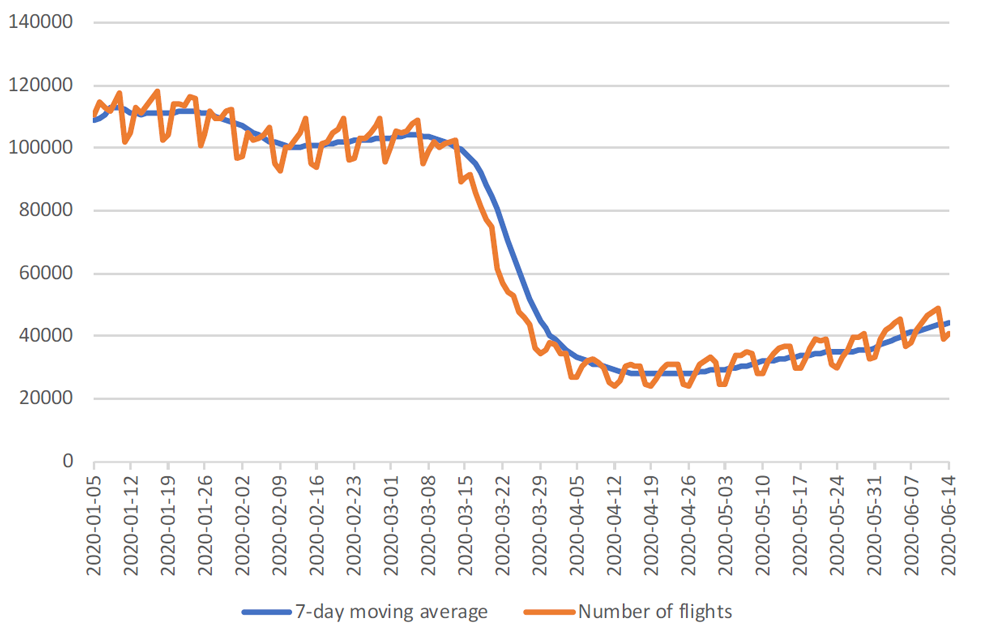 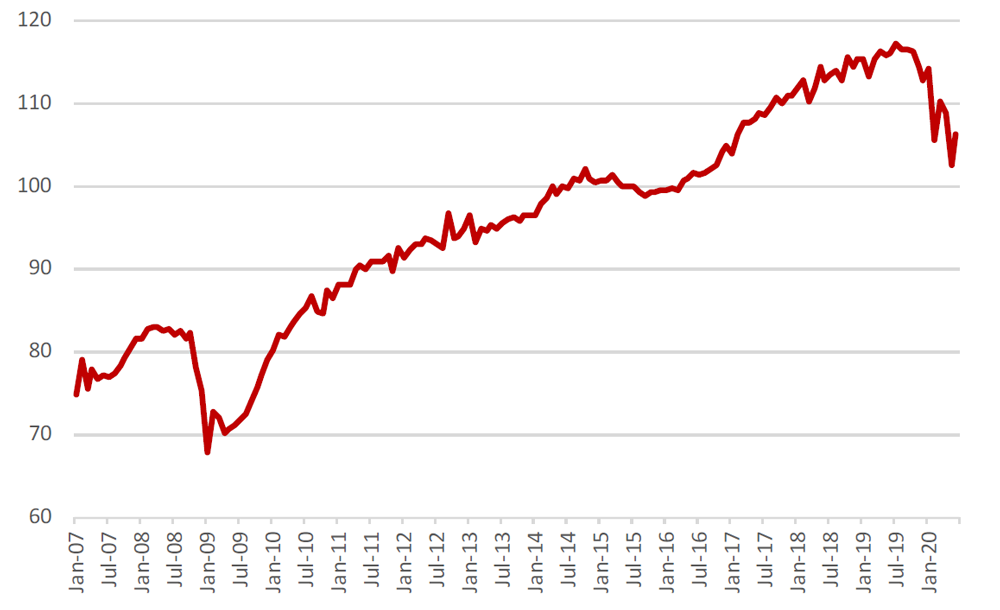 Source: Institute for Shipping Economics and Logistics through April 2020, WTO Secretariat estimates based on UN Comtrade AIS global/regional port calls for May and June. 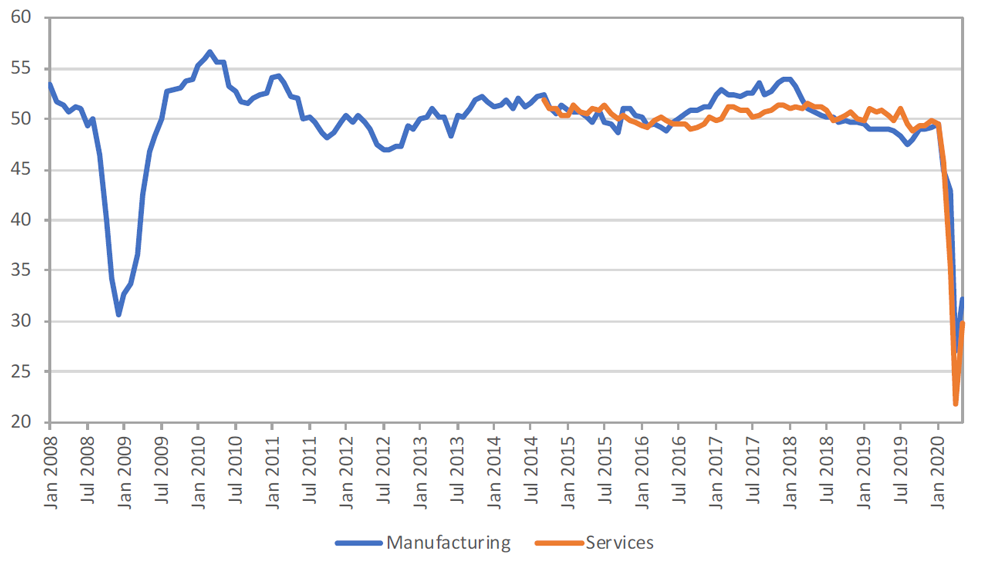 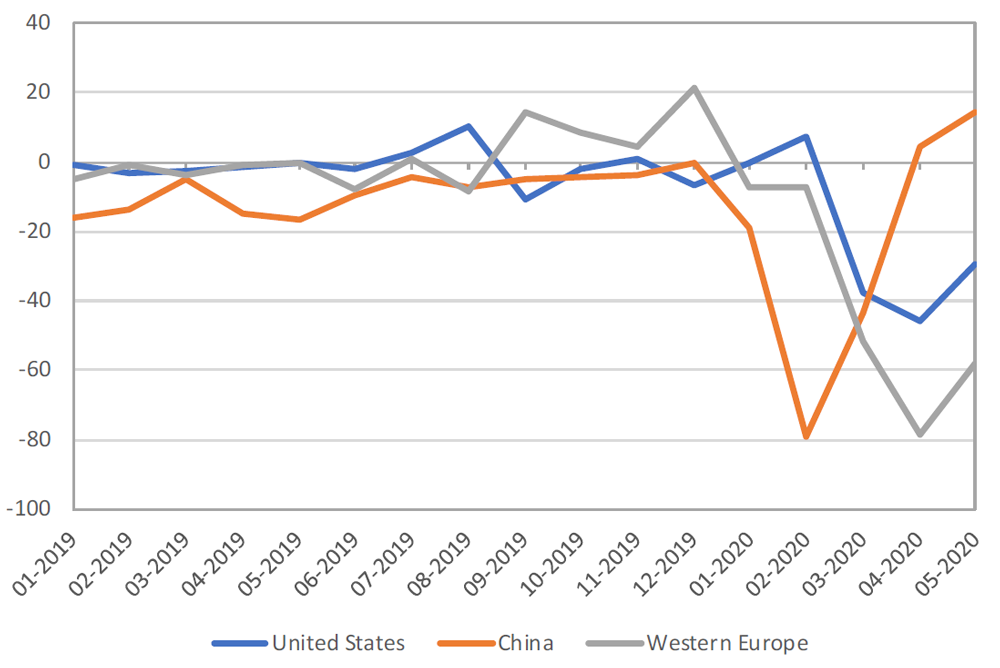