I have it on good authority that it is Foreign Minister Carlos Alberto França's birthday. So let me start by wishing His Excellency many happy returns of the day.

It's an honour to be here at the Rio Branco Institute. Over the course of my career, I have had the privilege to interact with many Brazilian diplomats — most recently Ambassador Alexandre Parola and his team at your mission in Geneva. I have been consistently impressed with their knowledge, their skill, and their constructive approach. So I'm really delighted to see for myself where they — and my predecessor as DG, Ambassador Roberto Azevêdo and his wonderful wife Ambassador Maria Nazareth Farani Azevêdo (Lele) — got their start.

Before coming here, I read up a bit on the Baron of Rio Branco. Though he seems to have been somewhat old-fashioned in his fondness for titles, he was ahead of his time for his belief in peaceful diplomacy, mediation, and arbitration as the preferable means to deal with international disputes. He died in 1912, meaning that unlike some of his counterparts elsewhere, he reached this conclusion without having to witness the devastating wars of the first half of the twentieth century. I understand Rio Branco is credited with laying the foundation for Brazil's enduring commitment to international peace and multilateralism.

Both these pillars of Brazilian foreign policy are today under threat, as we watch the devastating war in Ukraine and struggle with solutions to global commons challenges such as the COVID-19 pandemic and climate change. In the arena we are focusing on — that is, global trade and economic governance — multilateralism faces serious challenges.

I will use my remarks to look at these challenges to multilateralism, and point to potential ways forward.

I will make the case that multilateralism continues to matter for global trade, and that though Brazil and other countries have good reason to fear the decoupling of the world economy into two, or maybe even three self-contained trading spheres under the weight of present geopolitical tensions, such decoupling would impose immense costs on the world in terms of lost efficiency, output growth, jobs, income and human welfare.

I will argue that it is in the world's best interest to strengthen multilateralism. But I will also insist that such multilateralism cannot be the multilateralism of old. It must be reimagined and made fit for purpose to serve 21st century challenges. Multilateral institutions, such as the WTO, need to evolve to respond to new realities. Indeed, Brazil and other WTO members have an important part to play in making the WTO fit for the future.

Finally, I will contend that Brazil and Latin America have much to gain from a reformed and revitalized multilateral trading system.

It is important that we start by recognizing that disenchantment and dissatisfaction with multilateralism and globalization — and talk of decoupling — had been building for years, long before the pandemic or the war in Ukraine.

Even though global integration and solidarity had led to decades of relative peace and prosperity, and lifted over 1 billion people out of poverty, many were left behind: poor countries, and poor- and lower-middle-class people in rich countries. Shifts in the global balance of economic and geopolitical power also bred anxiety and resentment.

When the pandemic hit, the ensuing competition for vaccines, protective equipment and other countermeasures exposed the vulnerability of certain critical supply chains, not just for medical products but also for automotive semiconductors, due to their excessive concentration in a few countries. This was compounded by the subsequent supply chain snafus arising from mismatches between demand and supply, as households and businesses deployed fiscal stimulus resources away from locked-down services and towards durable goods.

The Ukraine war has exposed further vulnerabilities in food and energy supply chains, as well as for rare metals such as palladium, since Ukraine and Russia are major global suppliers. Food and energy prices, already high, have spiked further, squeezing household budgets everywhere and threatening hunger in parts of Africa and the Middle East.

To many, the interdependence built up by globalization and the multilateral trading system now seems to be a threat rather than a benefit. Talk of decoupling, reshoring, industrial policy, and self-sufficiency has become very fashionable.

For all the criticism of supply chains early in the pandemic, trade has been a vital part of our response: cross-border supply chains were essential for mass-producing and accessing COVID-19 vaccines and other medical supplies.

Trade has also been an important driver of economic recovery. Global merchandise trade rebounded strongly after the lockdowns, and has been at record highs since early 2021. Global trade grew roughly twice as fast as economic output last year, making external demand a key driver of growth for developing economies where domestic demand had been slower to recover.

Looking back a few decades, open global trade, anchored in multilateral trade rules, has been enormously beneficial for growth and development.

Developing countries have been able to hitch their economic wagons to external demand and ideas, and use them to drive growth, job creation, and structural change.

In the quarter-century between the GATT's 1995 transformation into the WTO and the start of the COVID-19 pandemic in early 2020, the world saw an unprecedented drop in the share of people living in extreme poverty — from around 30% to below 10%. Income gaps between poor and rich countries narrowed for the first time since the Industrial Revolution.

These changes were most dramatically visible in China, where per capita incomes increased nearly five-fold between 2000 and 2020 (from $3400 to $16,200 in purchasing power parity terms), and extreme poverty was essentially eliminated. China tripled its share of global merchandise trade over that time, emerging as the world's biggest exporter. Its share of global economic output, in purchasing power parity terms, more than doubled, from 7.3% to 18.3%.

But other emerging markets and developing economies also benefited. For Brazil, exports grew from $55 billion in 2000 to $209 billion in 2020, and the country cemented its role as an agriculture trading powerhouse.

I want to note here that trade also played an important role in Brazil's strong per capita growth from 1950 till about 1979. While those decades are often associated with import substitution, the Commission on Growth and Development led by Nobel economist Michael Spence, on which I served, found that the period was marked by increasing Brazilian integration with international markets. Brazil diversified its exports from coffee into light manufacturing, taking advantage of international markets that were liberalizing under the GATT. Exports as a share of GDP went from 5% in the early 1950s to about 12% in the early 1980s.

Turning back to the current, more multipolar, world economy, Brazil's experience underscores the importance of multilateral rules for companies and countries to take advantage of changing export market opportunities.

Consider the following shifts in the destination of Brazilian exports:

These commercial realities illustrate why Brazil has a strong interest in preserving and enhancing access to all of its major markets, not in choosing between them.

A decoupling of the global economy would be enormously costly for all countries. WTO economists recently tried to estimate what would happen to GDP if the world divided up into two self-contained economic blocs.

The costs of decoupling would go beyond diminished output and productivity.

In a world with less trade, we would become more vulnerable to localized crises or natural disasters. Thanks to trade, a country lacking sufficient water and arable land can import food from Brazil. In 2021, Brazilian meat producers were able to respond to drought at home by importing animal feed.

At a more fundamental level, the nature of the problems we confront today require multilateralism and multilateral cooperation. A fragmented world would be poorly equipped to respond effectively to global commons problems, from climate change to pandemic disease. One illustration of this comes from the immediate fallout from the war in Ukraine: we will need international cooperation to stabilize markets for food, fertilizer, and other key products.

We really have no choice but to support multilateralism, because without it, all countries will struggle to deliver the greater prosperity and security people want.

But this does not mean a return to the multilateralism of 2019, before the pandemic, or even of 1995, when the WTO was created. We need to strengthen multilateralism by reimagining and reforming it to fit the economic and political realities of the 21st century. Multilateral institutions like the WTO must be made fit for purpose.

In the trade arena, the right response to the present stresses is not to retreat from trade. It is to pursue deeper, more diversified, and deconcentrated international markets.

This vision for the future of the WTO is very much in line with the objectives set out in the preamble of its founding Marrakesh agreement: to use trade to raise living standards, create jobs and promote sustainable development.

Improving the lives of people is the goal. Trade is the means. This is similar in spirit to something that Oscar Niemeyer, the creator of many of this city's landmarks, once said about architecture. His work as such was unimportant to him, he said, but “what is important is life … people, solidarity, and thinking about a better world.”

For the WTO to keep contributing to improving the lives of people in the decades ahead, its monitoring, negotiating and dispute settlement functions have to be reformed.

Agreements that no longer reflect economic reality, such as the Agreement on Subsidies and Countervailing Measures, have to be revisited.

A variety of negotiating approaches — multilateral, plurilateral — should be explored to help reach agreements.

Had we built more flexible agreements open to periodic review, had we settled disputes more simply and quickly, it might have been easier to close our ongoing negotiations in agriculture, fisheries subsidies, and other issues dear to Brazil.

Carrying on with the old way of doing business is a sure path to not get a WTO that is fit for purpose. A WTO that provides not more, but diminishing returns to the global economy.

Reforming and modernizing the WTO will ensure that a critically important multilateral organization continues to play the role that people around the world need it to play.

The positive news is that WTO members are taking steps in the right direction — and Brazil and other Latin American countries are playing leadership roles.

Before closing, let me say that I am convinced that Brazil and Latin America have a great deal to gain from a reformed and reinvigorated WTO.

The re-globalization process I described earlier is already starting to happen, as supply chain investment shifts locations in search of different risk-efficiency tradeoffs, proximity to markets, and lower costs.

This migration — provided it remains anchored in a multilateral framework — creates new opportunities for Brazil to further promote economic diversification, attract new investment and brands, and increase its currently modest participation in global value chains for manufactures and services.

Bright spots are already visible — in Brazil's computer services exports, which were 27% higher in 2021 than in 2019; in the country's dynamic startups; and in the new COVID-19 vaccine production facilities that will make for a more diverse global vaccine manufacturing base in a future health crisis.

Over a half-century ago, during the economic miracle years, a reopening global economy helped Brazil drive value addition, diversification, and growth. A revitalized multilateral trading system could help Brazil do it again in the 21st century.

But the WTO of the future needs first to solve some of the problems of the present. So let's work together now and at our Twelfth Ministerial Conference in June to conclude the negotiations on fisheries subsidies and agriculture, to deliver a WTO agreement on pandemic response, and to push WTO reform for a strengthened multilateral trading system.

Today, more than ever, the WTO needs Brazil, and Brazil needs the WTO. 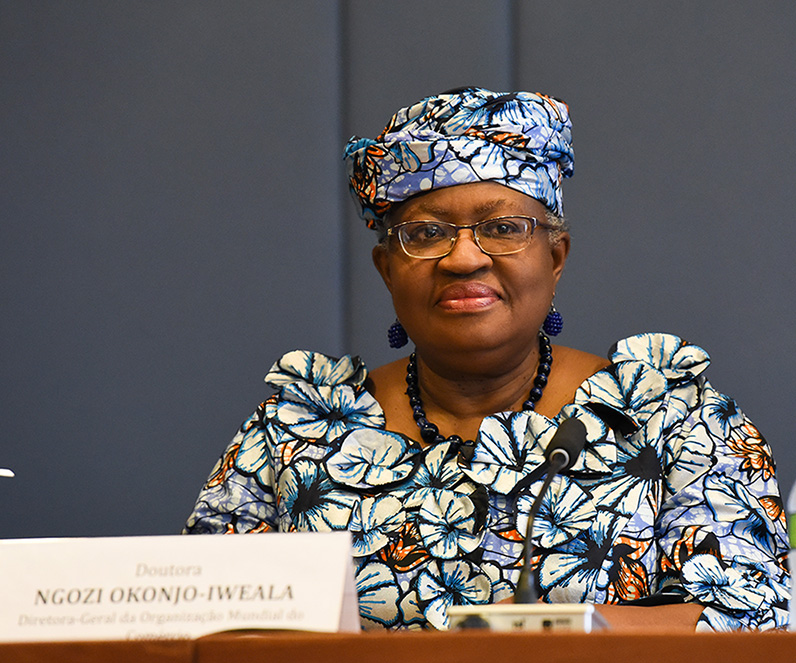