Good afternoon everyone. I want to welcome you to the release of the WTO’s flagship annual trade statistics and trade forecast. This is my very first participation in that event and I want to thank you all for being with us today.

Let me start with the story of the container ship that blocked the Suez Canal for nearly a week.

We all saw that hundreds of ships were backed up in a traffic jam. Others went around the Cape of Good Hope adding considerable number of days and costs to their journey. Estimates said nearly $10 billion dollars of trade was being affected each day.

The fact that the Ever Given was able to cause so much disruption is a sign that global merchandise trade is relatively robust — and that global supply chains have held up through the pandemic.

The word ‘relatively’ is important: the volume of world merchandise trade still contracted by 5.3% in 2020. But this contraction was smaller than initially feared.

Following a sharp decline in the first half of the year, trade recovered more quickly than expected in the second half of 2020. This rebound has continued, and the WTO’s baseline trade forecast foresees an 8% increase in the volume of world merchandise trade for 2021.

Trade growth is expected to slow to 4% in 2022. It's important to note that this would still leave trade below its pre-pandemic trend.

COVID-19 continues to pose the greatest threat to the outlook for trade. New waves of infection could easily further undermine any hoped-for recovery.

The rapid development of effective vaccines has given the world a realistic chance of stopping this disease in its tracks and jump-starting the world economy at the same time, but this opportunity could be squandered if large numbers of countries and people do not have equal access to vaccines.

A rapid, global and equitable vaccine roll-out is the best stimulus plan we have for the strong and sustained economic recovery that we all need.

Ramping up the production and deployment of vaccines in all countries will allow businesses and schools to reopen more quickly and help economies get back on their feet.

Depending on how quickly we can bring the pandemic to an end, trade could either see a major resurgence over the next two years, or it could experience a weaker, more prolonged recovery.

Accelerated vaccinations would allow containment measures to be relaxed sooner, which could raise trade growth up to 2.5 percentage points above the baseline forecast in 2021 — returning trade to the pre-pandemic trend.

On the other hand, if supply shortages continue, or if vaccine-resistant strains of the virus emerge, trade growth could end up 2 percentage points below the baseline forecast.

Overall, we believe that the balance of risks to the forecast is considered to be on the downside, but upside potential exists if countries make wise policy choices.

Large monetary and fiscal injections in advanced economies helped prevent a bigger downturn last year — a major factor in why growth and trade have both outperformed projections from last year. But these support measures will not be enough to bring an end to the crisis. Only by ramping up production of vaccines and making them more widely available can we hope to get the world economy back to full speed.

The possibility that many countries will be left behind as we emerge from the crisis is a major concern. Despite the broad-based nature of the global economic recovery to date, there are signs of divergence in trade flows across regions.

If the current WTO forecast is realized, exports from Asia at the end of 2021 would be 10% higher than they were in 2019, while most other regions would see smaller increases or modest declines.

For example, exports of Europe and North America’s would be steady, while shipments from Africa and the Middle East would be down 4% and 3%, respectively.

The import side would see declines in South America (‑3%), Africa (-2%) and the Middle East (-6%), while Asia (+5%) and North America (+7%) would increase, reflecting the relative strength of their economic recoveries.

In this context, a rise in protectionism would be damaging not just to global economic growth but to vaccine production as well. Manufacturing vaccines requires inputs from many countries. As we have cited and heard many times, one leading COVID-19 vaccine manufacturer says that their vaccine needs 280 components sourced from 19 different countries. You can see how complicated the supply chain still is. Trade restrictions would make it even harder to ramp up production, leading to more unequal economic and health outcomes.

The WTO has helped to keep trade flowing during the crisis. Now, the international community must leverage the power of trade to expand access to life-saving vaccines. 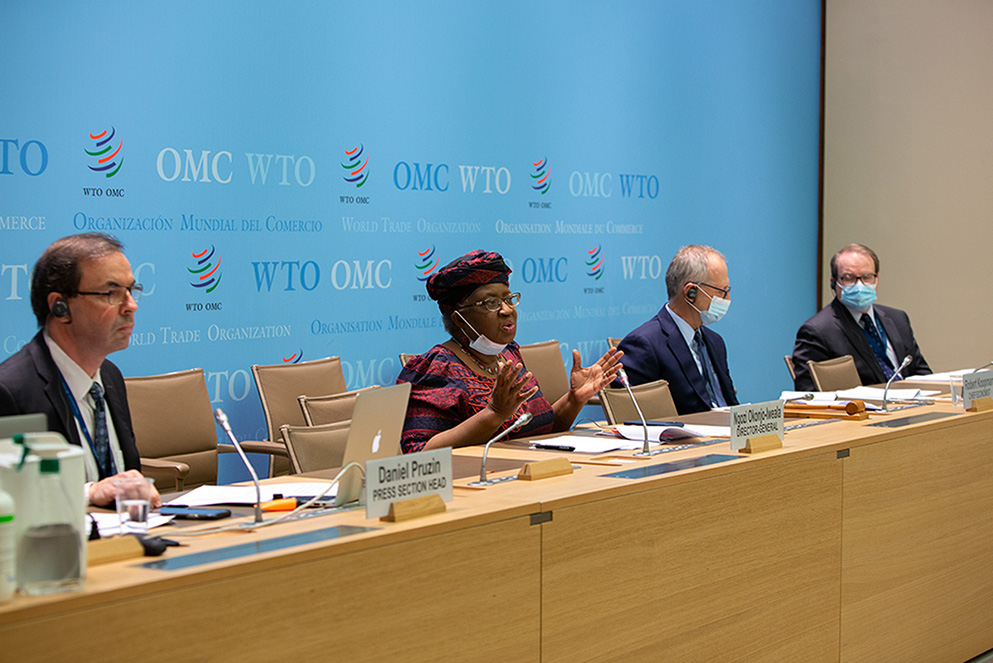