I would like to start by putting on the record my thanks to the negotiating group chairs for their hard work, particularly over recent weeks.

I would also like to thank the General Council Chair for his work on the draft declaration. As Ambassador Carim reported to the informal open-ended meeting on 22 November, despite not having a final result in Geneva, the process was positive, transparent and inclusive. At that meeting, we also heard that the MC11 Chair intends to continue to work for a Ministerial Declaration in Buenos Aires.

The last time we met to review our progress on preparations for MC11 was just over a month ago, on 24 October. Since then, there has been significant activity in a number of areas.

On 8 November, I attended a meeting of APEC trade ministers in Da Nang, Viet Nam, where I had the opportunity to talk to ministers from that group.

I also travelled to Singapore, where I met with Prime Minister Lee and Trade and Industry Minister Lim.

In addition, I was invited to attend the High-Level Forum on Facilitating Trade and Investment for Development that took place in Abuja, Nigeria, on the 2nd  and 3rd of November. And I engaged with a number of ministers at that meeting.

I must say that I found all of these interactions extremely helpful in raising ministers' awareness of our work. I heard a great deal of support for a successful MC11 at the political level.

Here in Geneva, I held a series of conversations, mainly with those that have submitted proposals on different topics. The objective was to better understand from proponents how they saw the process ahead in their areas of interest in the lead up to MC11.

I have been urging proponents to be realistic and flexible – but also to engage with other members, particularly those with opposing views, in order to find ways of addressing their concerns and building consensus.

Of course, I have been in regular contact with the chairs.

Last Friday, I met with all of the chairs together, along with the Chairman of the General Council. I have also remained in constant contact with the MC11 Chair – Susana Malcorra – including last week when she was in Geneva with her team.

Overall, I think that there has been a lot of progress over weeks.

We have seen excellent engagement. Many proposals were brought forward, many meetings held, and much hard work has been done.

However, members' positions continue to diverge significantly on the substantive issues. Despite our best efforts, I don't think there will be agreed negotiated outcomes in Geneva.

So where does that leave us in terms of our work in Buenos Aires?

While there remains a lack of clarity on what may be possible, I am hearing that there are numerous issues that members want to talk about in Argentina.

I have been calling for prioritization for some months. I appreciate members' efforts here, but limited progress has been made on this front. We still have a lot of issues in play for the ministerial – many issues to deal with, in a very concentrated time period.

And, of course, they are all important issues that merit ministers' attention and consideration at the political level.

We must consider how we manage this, and make provision for ministers to deal with these issues.

For the sake of the orderly management of the meeting, we are considering options for appointing a few 'minister facilitators' who will work with the negotiating chairs in Buenos Aires. This will be ultimately a decision by the Chair of the Ministerial Conference.

Based on the current situation, I think it would be reasonable to expect facilitators for: agriculture, development, rules, e-commerce, and I think we would probably have a fifth facilitator covering issues under services, and maybe some other areas (although I can't be very specific until all the work is finalized in Geneva).

So this all may need adjustments, depending on how things evolve. It would be prudent to remain open for some fine-tuning.

Nonetheless, I believe that five facilitators are about as much as we can handle – in part because of practical considerations, such as meeting space in Buenos Aires.

Let me say as well that I know some members have also been developing work in limited group formats. This includes the work on MSMEs, investment facilitation, and any other issue that is being discussed in a track different from the negotiating groups. It is for the proponents in these areas to advance this work as they see fit. If they want to appoint their own chairs or facilitators at the Ministerial, that is for them to take forward.

In considering the process for the meeting, clearly openness, transparency and inclusiveness will be important.

In addition, it should always be a bottom-up process. Many members have emphasised this during our preparatory work.

And with that in mind, let me be clear about how I see the process at this point in time.

First, the facilitators (as well as the chairs and the Secretariat) will be there simply to facilitate your work – not to drive it. Their role will be to convene meetings and facilitate conversations – but not more than that. The driving force on substance has to come from the members. Facilitators can only consult and facilitate – they can’t do the job for you.

Second, facilitators will aim to hold open meetings. All members who want to participate will have a chance to do so. Moreover, I will encourage facilitators to coordinate with each other in scheduling their meetings, so that we avoid overlaps, as far as possible.

Third, we will also look to hold informal HoDs meetings in Buenos Aires at the end of each afternoon or early evening – starting on Monday the 11th. These meetings will be a chance for facilitators to report back to everyone on their work. And they will be an opportunity for every minister to participate on every issue and assess progress achieved in the different areas. Even if you haven't attended a meeting on a particular issue, you will have a chance to make your views heard at the HoDs.

Finally, I will be holding consultations in Buenos Aires, to help the process where I can. But let me stress that while I will hold consultations where needed, I will not convene closed-door negotiating meetings.

So this is the current scenario.

I will continue to consult with others – with the General Council Chair, the negotiating group chairs, and the MC11 Chair before finalizing preparations here in Geneva. We will confirm all of these details at the start of the conference, or earlier if that is possible.

Given the number of issues likely to be discussed, I think we have to be prepared for a quite fluid process in Buenos Aires.

Arrangements in ministerial conferences are always difficult. But, as I have explained, we will do everything we can to ensure that the meeting is open, transparent, inclusive – and orderly.

It is right that we should take a bottom-up approach – true to the member-driven nature of the organization. But it is worth noting that with this approach, the responsibility to advance our work falls squarely on the shoulders of members.

Success will require you to show flexibility and creativity. It will also require you to show restraint. If the HoDs meetings are to function as the forum for decisions, we will need to take a business-like approach. And this is very important. There will not be an opportunity for long, prepared statements. Your minister is not required to speak. We will hear the reports of the facilitators and anything that members have to say, and then take decisions in a very straightforward and executive fashion.

Again, this will not be the moment for statements.

It will be your duty to be efficient and expeditious. It is up to members to determine how far we can advance and how quickly.

MC11 is a very important moment. It is an opportunity to:

Precisely how far each issue proceeds will depend on the dynamics of each negotiation. Whether you manage to agree outcomes, a work programme or neither will depend on the work in each area – and of course on the decision of the HoDs.

So let's see what we can do. The WTO has been on a very positive path over the last two ministerial conferences – let’s continue that journey in Buenos Aires and beyond. I ask for your continued commitment, engagement and flexibility in this final stretch.

Thank you. That concludes my statement. 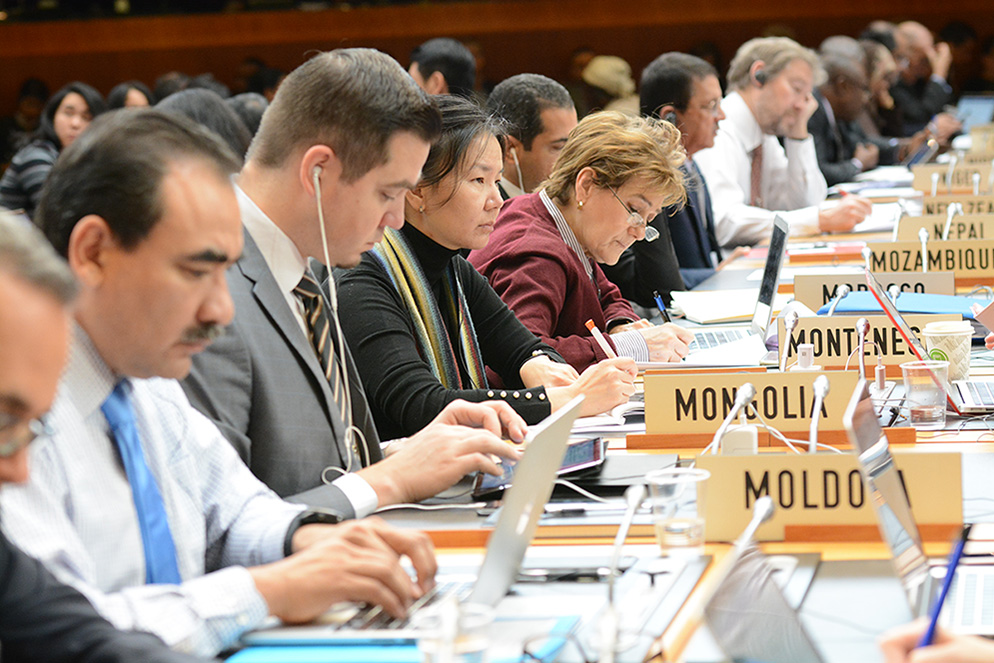