Welcome to the WTO and to the launch of this year's World Trade Report — our flagship publication on global trade policy.

Before I start I would like to thank Bob Koopman and his team, particularly Robert Teh and Coleman Nee, for their hard work in producing this excellent Report — along with Paulette Planchette for providing the essential administrative support.

It is the job of the WTO to make the trading system work better for all. And therefore it is crucial that we fully understand the impact of changes in the trading system — particularly arising from WTO agreements. Studies like the World Trade Report have an important role to play in this regard — to ensure that we hear the signal rather than the noise.

They provide valuable insights about the work of the organization — and of the effect that it has across the board.

Every year, this study looks at a particular feature of the trade landscape.

This year's report focuses on the benefits and challenges of implementing the WTO's Trade Facilitation Agreement — or the 'TFA' for short.

And I think it's very important to have a closer look at the impact of this agreement.

The TFA was successfully concluded at the WTO's 9th Ministerial Conference in Bali in December 2013.

It is the first multilateral agreement since the organization was created in 1995 — and it is a ground-breaking one.

This Agreement aims to standardize, streamline and speed-up customs processes around the world, helping to expedite the movement, release and clearance of goods.

In doing so, it will significantly cut the costs of trade.

All too often, outdated and uncoordinated customs processes slow down the movement of merchandise and raise trade costs to prohibitive levels — especially in developing and least-developed countries.

By tackling these problems, the TFA will have a big impact on the global economy.

You could say that it is global trade's equivalent of the shift from dial-up internet access to broadband.

And the TFA has a unique architecture.

Not only will the majority of the benefits accrue to developing and least developed countries, it also provides them with the flexibility to tailor their commitments and implementation schedules according to their specific needs and capacities.

It will also provide practical support to help with implementation.

There is significant support available from a range of partners to help with trade facilitation measures in general and specifically with the implementation of the TFA.

We created the Trade Facilitation Agreement Facility to ensure that everyone could access the support they need — and it has got off to a good start.

So this is a very innovative agreement, and we need to better understand its potential impacts.

Of course, that is precisely the aim of this report.

The 2015 World Trade Report is the first major study since the TFA was reached in Bali to examine the economic implications of this agreement in full.

Previous studies have been published by other institutions in advance of the Bali conference. They produced various predictions about the potential effects of trade facilitation in general and the TFA in particular.

Those contributions have been very welcome and have been important to get this debate rolling.

With this in mind, the intention of this report is to provide a fresh and quite rigorous analysis based on a clause-by-clause study of the final agreement text.

And to allow for a more comprehensive outlook, we have used two different models.

The Report's main findings have been reached using the 'computable general equilibrium' model. This model was chosen in order to produce robust, conservative estimates of the potential impacts of the TFA.

To complement these findings the Report also uses a separate economic modelling approach, known as the 'gravity' model.

Applying both approaches allows the Report to answer different questions and to compare the results to the body of existing research on trade facilitation.

Our results are in a similar ballpark and of the same order of magnitude as previous studies. This is interesting as we took an entirely independent track.

And indeed the results are very encouraging.

The World Trade Report shows that full implementation of the TFA could reduce trade costs of members by an average of 14.5%.

And this could have a significant impact.

By reducing high trade costs, the TFA has the potential to increase global merchandise exports by up to 1 trillion dollars per annum.

For developing economies alone, it could boost their exports by almost 730 billion dollars per annum.

Based on these findings we estimate that 20 million jobs could be created by TFA implementation, and that this number could rise up to around 30 million, depending on the sectors involved and how labour-intensive they are.

Overall, the TFA could increase global GDP growth up to 0.5 percentage points per annum.

In fact, the Report shows that the Agreement could have a bigger impact on international trade than the elimination of all remaining tariffs.

At a time of sluggish growth, these effects could be a big boost to economies across the globe.

The Report also highlights previously unseen benefits that the Agreement could bring, especially for developing and least-developed countries.

One of these benefits, for example, is economic diversification.

Implementing the reforms contained within the TFA will help these countries diversify their economies — in terms of both products exported and markets reached.

Developing countries could increase the number of new products exported by as much as 20 per cent, and LDCs are likely to see a much bigger increase — of up to 35 per cent.

And they could begin to enter new markets. Supported by the TFA developing countries could enter an additional 30 per cent more foreign markets and LDCs a further 60 per cent more.

The Agreement can also enhance their participation in global value chains.

This is particularly important, as the world is more connected than ever before. Developing countries are increasingly seeking to join global trade networks — but too often they find that the barriers are too high.

The TFA is expected to reduce some of those barriers by reducing both delays and variability in delivery time.

By simplifying trade procedures, the TFA can lead to greater involvement in international trade of these companies, which are essentially the job-creators and growth-drivers of so many economies.

So there is much to gain on the table, especially for developing economies.

This underlines the importance of implementing the Agreement in full — and doing so as quickly as possible.

The more extensive and faster the implementation of the TFA, the greater the benefits will be.

The first step in that direction is to complete the ratification process of the TFA.

As of today, 50 WTO members have ratified the Agreement. And there has been an acceleration in ratifications in recent months.

This is very positive — we are almost halfway to the target number, at which the Agreement comes into force.

So we must increase the pace.

The second step will be to ensure that, in implementing the Agreement, members are in a position to turn the Agreement's potential benefits into reality.

And we must make sure that the necessary resources will be available to support the reform efforts.

Empirical evidence highlighted in this report shows that the accessibility and sustainability of financial resources are crucial in supporting implementing the Agreement, especially for developing and least-developed countries.

So I would like to extend my gratitude to all those members and organizations that have already committed to this process, and strongly encourage others to also lend their hand.

Finally, the analytical work does not end with this report. Rather, this is the start.

Effective implementation of the TFA will require that we carefully monitor the progress of the Agreement after it comes into force.

Good indicators, more data, better analytical tools — all of these are required to effectively undertake this task.

The work of the WTO, and of partner organizations, will be critical in this regard.

So we must be engaged in this effort.

I think that the TFA is a major step forward in global economic cooperation — and the figures in this report highlight that.

Now, we must keep the momentum behind this process of reform and ensure that its benefits are realised in full.

This is very important as we are just a couple of weeks away from our 10th Ministerial Conference in Nairobi.

Much work is going on to ensure that we can deliver meaningful outcomes.

Our experience shows that we can deliver when we are flexible and innovative — and the TFA is clear proof of that.

So I hope that this report can be a reminder of what we can achieve when we work together, when we are creative, open-minded and when we want to do it.

Thank you for listening.

Launch of the Report 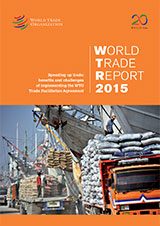