Post-accession forum
Maximising the benefits of WTO membership: a balance of rights and obligations WTO Membership of Afghanistan and Liberia

Ministers at the Tenth WTO Ministerial Conference (MC10) in December 2015 in Nairobi formally approved the Protocols on the Accession of Afghanistan and Liberia.  They welcomed the two LDCs as the latest additions to the WTO family.  Nairobi was indeed a historic milestone for Afghanistan and Liberia, following their successful negotiations of the terms of accessions with WTO Members under challenging circumstances and capacity constraints.

WTO Members have welcomed the Accession Packages of Afghanistan and Liberia as high quality, and praised the process and drive of these two LDCs as good examples on how to expedite WTO accession negotiations.  In substance, the Accession Packages signal their firm commitments to use the WTO membership to sustain their reform agenda for economic transformation, enhanced competitiveness, improvements to their business environment and sustained integration to the rules-based global economy.

In the process of their accession, the Governments of Afghanistan and Liberia welcomed the support provided by bilateral development partners, multilateral and regional institutions.  WTO Director-General Roberto Azevêdo in formally initiating WTO Post-Accession in his 2014 Annual Report on Accessions underscored that support shall remain even more critical in the immediate period following membership.   Strong partnership and coordination between Article XII LDCs and the international community will need to be sustained, including through an agreed follow-up mechanism.  This Post-Accession support has been critical in ensuring that Afghanistan and Liberia maximise the benefits of WTO membership.

Seven months after the MC10, the international trade community gathered, again in Nairobi, for the UNCTAD14 on 19 July 2016.  Nairobi sustained the momentum in the trade and development agenda for Afghanistan and Liberia, this time, for their WTO membership in a Post-Accession Forum under the leadership of UNCTAD.

The Nairobi Post-Accession Forum provided a platform for an exchange on the following topics:

Interventions by other multilateral institutions and bilateral partners

Joakim Reiter, Deputy Secretary General and Former Chairman of the Working Party on the Accession of the Republic of Liberia

Sponsored by the EIF Secretariat 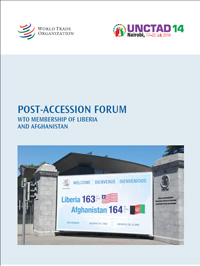