1 The WTO can ... cut living costs and raise living standards

We are all consumers.

The prices we pay for our food and clothing, our necessities and luxuries, and everything else in between, are affected by trade policies. 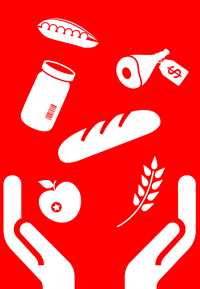 Food security is the elephant in the room which the WTO must address. Trade did not feed the hungry when food was cheap and abundant, and is even less able to do so now that prices are sky-high. Global food imports shall be worth $1.3 trillion in 2011, and the food import bills of the least developed countries have soared by over a third over the last year. The G-20 has acknowledged that excessive reliance on food imports has left people in developing countries increasingly vulnerable to

price shocks and food shortages. The WTO must now do the same.

First, trade isn’t – and never was – a silver bullet. Not for food security or really any other purpose. Trade offers important advantages, and when it works well, it reduces costs, improves consumer options, and assists in managing risks. But over-reliance on trade – either as importers or

I fundamentally disagree with your assertion that countries need to limit reliance on international trade to achieve food security objectives. On the contrary, there is agreement among most UN-led experts that international trade is part of the package of solutions to achieve food security. The UN High Level Task Force on the Global Food Security […] noted that ‘more liberalized international markets would contribute to global food and nutrition security through increased trade volumes and access to diverse sources of food imports.’ […] The Inter-agency report for the G-20 stated, for example, that ‘trade is an essential component of any food security strategy’ and that ‘policies that distort production and trade in agricultural commodities potentially impede the

achievement of long run food security’. […] Indeed, our members negotiate towards a more level playing field in agriculture in order to enhance their ability to achieve food security.

Protectionism is expensive: it raises prices. The WTO’s global system lowers trade barriers through negotiation and operates under the principle of non-discrimination.

The result is reduced costs of production (because imports used in production are cheaper), reduced prices of finished goods and services, more choice and ultimately a lower cost of living.

Elsewhere, we look at the challenges that imports can present. Here the focus is on the impact on us, as consumers.

Overall incomes can rise. Trade opening since 1945 has boosted US annual incomes by $1 trillion, or $9,000 per household, according to the US government. Two major trade agreements of the 1990s — the WTO Uruguay Round and the North American Free Trade Agreement between the US, Canada, and Mexico — generate increased purchasing power of $1,300 to $2,000 per year for the average American family of four, it says.

The European Union, which, through the creation of its single market undertook the third major liberalization at the turn of the century, says the gains from the wider variety of goods and services available to the average European consumer are in the range of €600 a year, in addition to the gains from lower prices.

Food is cheaper if protection is reduced. When you protect your agriculture, food is artificially expensive. When protection is particularly high — as when market prices are naturally low — the impact can be huge.

Protecting agriculture raised food prices by an estimated $1,500 per year for a family of four in the European Union in 1997 and by the equivalent of a 51% tax on food in Japan (1995). In just one year (1988), US consumers had $3 billion added to their grocery bills just to support sugar.

But there is also a paradox. Protection and subsidies in rich markets raise prices domestically but force down prices externally in world markets and particularly in poorer countries. If reform in the developed world raises world prices, consumers in the poorer countries may suffer, but their farmers receive more realistic prices, encouraging them to produce more and improving supplies within the country.

Negotiating agricultural trade reform is therefore a complex undertaking. Governments are still debating the roles agricultural policies play in a range of issues from food security to environmental protection.

But WTO members are now reducing the subsidies and the trade barriers that are the worst offenders. And they are negotiating to continue the reform in agriculture.

These issues have now been incorporated into a broader work programme, the Doha Development Agenda, launched at the fourth WTO Ministerial Conference in Doha, Qatar, in November 2001.

Clothes are cheaper. Like agriculture, trade in garments and textiles has been reformed although some protection remains. At times of peak protection, the costs to consumers were high.

In the US, import restrictions and high customs duties combined to raise US textiles and clothing prices by 58% in the late 1980s during the early years of the negotiations that produced global reform — the Uruguay Round talks that created the WTO.

UK consumers paid an estimated £500 million more per year for their clothing because of these restrictions. For Canadians, the bill was around C$780 million. For Australians, it would have been A$300 annually per average family if Australian customs duties had not been reduced in this period.

Reform of the textiles and clothing trade under the WTO was completed in 2005. The programme included eliminating restrictions on quantities of imports.

Even now, the import duties on cheaper essential products can be a disproportionate burden on the neediest.

If customs duties on textiles and clothing were also to be eliminated, economists calculated that the result could be a gain to the world of around $23 billion, including $12.3 billion for the US, $0.8 billion for Canada, $2.2 billion for the EU and around $8 billion for developing countries.

The same goes for other goods …
For example, it is estimated that at their peak in the early 1980s, quotas on cars imported into the US were transferring $5 billion a year in additional profits to Japanese car makers (and additional costs to consumers), who could sell their quota-limited cars at a premium.

Despite this protection, the US car industry continued to lose market share. Foreign producers simply jumped over the trade barrier and began manufacturing cars in the US.

Many other countries have also protected their car industries. In the Republic of Korea, for example, the combination of an 8% tariff and taxes on engine size add about $9,000 to the price tag of a $30,000 imported car.

… and services. In Africa, Tanzania, Uganda and Mozambique were among the countries with the highest price drops for telephone, Internet and other forms of communications services in 2008-10. So were Bhutan and Bangladesh in Asia, according to calculations by the International Telecommunications Union (ITU). Recent market opening in least-developed countries is beginning to show dividends.

From 2008 to 2010, Internet broadband prices in developing countries (as a proportion of gross domestic product or GDP) declined much more rapidly, by 52% , than in rich countries, at 35% . Today, hardly any countries still allow Internet services to be provided under monopoly rights.

More broadly, according to ITU data, regions that have liberalized telecoms more slowly and less fully — the Middle East and Africa — show higher average price levels than regions such as Europe, the Americas and Asia, which embraced reform earlier.

And businesses as well as citizens benefit. Price reductions and affordability resulting from market opening around the world mean that telecoms services reach more small and medium-sized enterprises too.

Tariffs often hurt the poor. According to studies in the United States, higher tariffs are charged on a number of products that are bought by lower-income sections of the population. These include sports shoes, underwear, T-shirts and much more — meaning these consumers pay tariff rates five to ten times higher than middle-class or rich families pay in upmarket shops. Poorer exporting countries, such as Cambodia and Bangladesh, are also hurt: they face tariffs 15 times higher than those applied to wealthy nations and oil exporters.

And so it goes on. The system now entrusted to the WTO has been in place for over 60 years.

In that time, there have been eight major rounds of trade negotiations. Trade barriers around the world are lower than they have ever been in modern trading history. They continue to fall, and we are all benefiting.

According to critics of agricultural protectionism, consumers and governments in rich countries have paid $ 350 billion per year supporting agriculture — enough to fly their 41 million dairy cows first class around the world one and a half times.