> News on all trade monitoring reports

Get in touch with the WTO Trade Monitoring team

These series of reports were started in the wake of the global financial and economic crisis that began in 2008. At the WTO's 8th Ministerial Conference in 2011, Ministers asked for the trade monitoring work to be continued and strengthened.

At the outset of the economic crisis, these reports were published up to four times a year. Currently, two reports are produced each year.

As a result of the Sixth Appraisal of the TPRM in 2016, trade monitoring meetings have a regular item on the agenda giving Members an oppurtunity to provide brief reports on significant changes in their trade policies between their trade policy reviews.

These joint reports with the OECD and UNCTAD are currently issued twice a year. At the outset of the economic crisis, they were issued four times a year.

Aim of the reports

The purpose of these trade monitoring reports is to enhance transparency of trade policy developments around the world and to provide WTO members and observers with an up-to-date picture of trends in the implementation of trade liberalizing as well as trade restricting measures, in particular in times of economic crisis when protectionist pressures tend to surge.

Preparation and discussion of the reports

The WTO Secretariat consults closely with all delegations to gather complete, up-to-date and accurate information on their trade and trade-related measures, and to verify the relevant information collected from other non-official sources. The WTO-wide reports are discussed at meetings of the WTO's Trade Policy Review Body.  The G-20 reports are sent to G-20 sherpas for their consideration and submission to the summit meetings of the G-20 leaders.

The database provides information on trade measures implemented by WTO members and observers since October 2008. The data is taken from the regular Trade Monitoring Reports prepared by the WTO Secretariat. All information is submitted to the relevant delegation for confirmation; if not confirmed, this is highlighted. The database is updated once a new report has been discussed by WTO members.

A set of linked databases that provides information on Members' commitments under the WTO's General Agreement on Trade in Services (GATS), services commitments in regional trade agreements (RTA), applied measures in services, and services statistics. 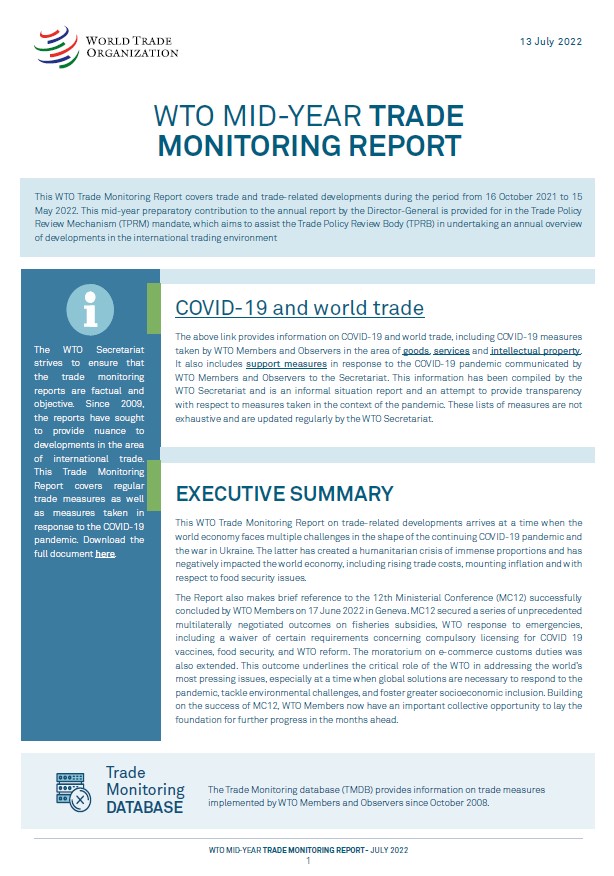 The above link provides information on COVID-19 and world trade, including COVID-19 measures taken by WTO members and observers in the area of goods, services and intellectual property. It also includes support measures communicated by WTO members and observers to the Secretariat in response to the COVID-19 pandemic. This information has been compiled by the WTO Secretariat and is an informal situation report and an attempt to provide transparency with respect to measures taken in the context of the pandemic. These lists of measures are not exhaustive and are updated regularly by the WTO Secretariat.