The package of rights and obligations that comprise the WTO membership terms for Liberia and Afghanistan will be presented to ministers in Nairobi for a formal decision on the countries’ accessions to the WTO. These formal decisions follow on from the decisions taken ad referendum by WTO members on the terms of Liberia’s (6 October) and Afghanistan’s (11 November) WTO membership. Agreement by ministers in Nairobi will pave the way for two more least-developed countries (LDCs) to join the organization and will bring to nine the number of LDCs which have acceded to the WTO since 1995.

Since the WTO was created in 1995, the process of accession to the organization is spelled out in Article XII of the Marrakesh Agreement, the accord which established the WTO. Terms of membership have to be agreed by the acceding government and WTO members. 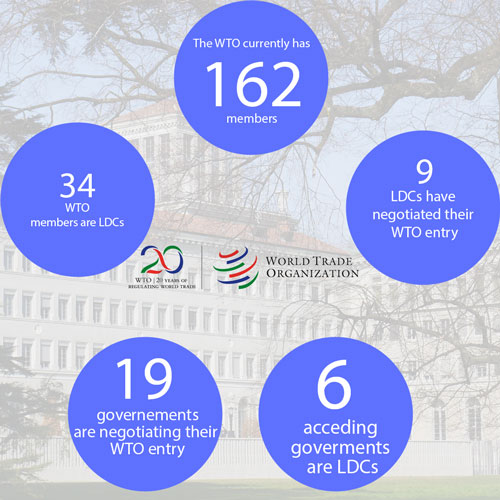 Any state or customs territory having full autonomy to conduct its trade policies can apply for WTO membership. The process starts when the applicant government submits a formal written request for accession to the WTO Director-General. The General Council considers the request and, on the basis of consensus, establishes a Working Party — open to all WTO members — to examine the request.

Through multilateral and plurilateral negotiations, the Working Party determines the terms and conditions of entry for the applicant government. These include commitments to observe WTO rules and disciplines upon accession and transitional periods to make any legislative or structural changes where necessary to implement these commitments.

At the same time, the acceding government engages in bilateral negotiations with interested Working Party members on concessions and commitments on market access for goods and services.

The “accession package” is adoptedat a final formal meeting of the Working Party, before being presented to the General Council or the Ministerial Conference for adoption. Once this is completed, the Protocol of Accession goes through the domestic ratification procedures of the acceding government. Thirty days after having deposited the instrument of acceptance with the WTO Director-General, the acceding government becomes a WTO member.

Accession: This is the process ofbecoming a member of the WTO, and signing on to its agreements. New members have to negotiate terms bilaterally with individual WTO members and multilaterally to ensure (1) the results of the bilateral negotiations apply to all WTO members, and (2) required legislation and institutional reforms meet WTO obligations.

Ad referendum: For further consideration by a party or parties having the authority to make a final decision.

Working Party: Group of WTO members negotiating multilaterally with a country applying to join the WTO.

Working Party report: Final document passed on to the General Council for approval, covering the applicant country’s commitments on opening its markets and on applying WTO rules.

Plurilateral: In the WTO, involving some members. See “multilateral”.

General Council: The WTO’s highest-level decision-making body in Geneva, meeting regularly to carry out the functions of the WTO. It has representatives (usually ambassadors or equivalent) from all WTO members and has the authority to act on behalf of the Ministerial Conference which only meets about every two years.

Ministerial Conference: The top decision-making WTO body. It meets about every two years at the level of ministers in any city of a WTO member.