From confrontation to cooperation on subsidies. Let's start with conversation.

Subsidies have long posed a challenge for the global trading system. It has been difficult to agree on a common approach to deal with them because of the difficulty of distinguishing between subsidies with legitimate policy objectives and those that constitute a “dangerous and improper attempt to export one’s own problems”, as John H. Jackson eloquently put it 50 years ago.(1) This problem has become an important driver of tensions among trading partners, tensions that can potentially come at a high cost. Also, there is a growing interaction of subsidies with mounting and urgent global challenges, from climate change to digitalization and from resilient supply chains to emergency support, each of which creates new demands for public investment. In these circumstances, the International Monetary Fund (IMF), the Organization for Economic Cooperation and Development (OECD), the World Bank and the World Trade Organization (WTO), in exercise of what amounts to “a duty of care”" of the multilateral economic system, joined forces and recently issued a report on trade, subsidies and international cooperation with the aim of supporting a forward-looking conversation with data and analysis that will help governments move from confrontation to cooperation. 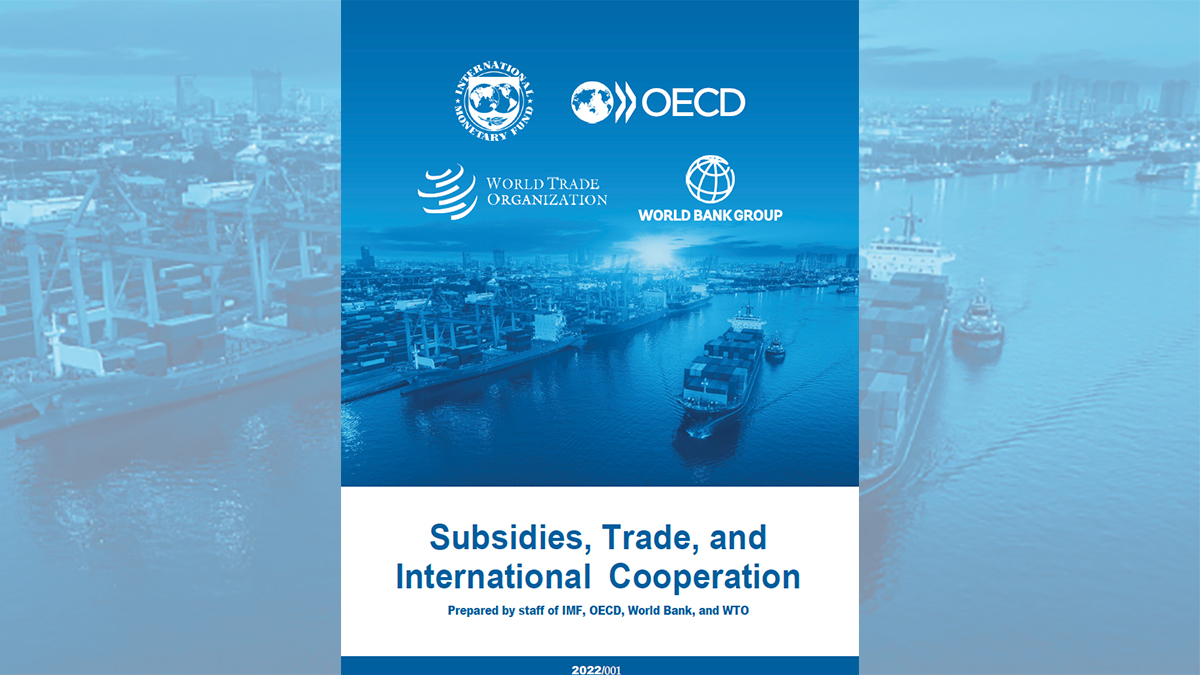 The report, which was launched by the heads of the four organizations during the IMF-World Bank Spring Meetings, looks at existing work and takes stock of what we know and what we don’t know about subsidies and their international dimensions. The picture that emerges is a complex and incomplete one. First, subsidies are on the rise, across sectors and countries. They are the most frequent type of intervention since the financial crisis — more than tariffs and other non-tariff measures, and they can take many forms. Second, subsidies can be an important tool to correct market failures. But we also have many examples of subsidies that do little to achieve their intended goal, or do so at an unnecessarily high cost, for the domestic economy, the global environment, or other countries. And third, back when international subsidy rules were being crafted, few people could have anticipated the forces that are reshaping the use and impacts of subsidies today. Those forces range from climate change to the growth of the digital sector and from the increasing international activity of state-owned enterprises to the rise of global value chains.

Beyond that, there are many gaps in our knowledge, along with strongly divergent views on the role and impact of subsidies. WTO members do not see eye-to-eye on central questions such as what is a “good” subsidy or what are the “negative” spillovers from subsidies. Finding common ground on these questions is made even more difficult by debates about the co-existence of different economic models in a single rules-based international system, as well as debates about special and differential treatment for emerging economies.

All this highlights the need for more dialogue on the role of subsidies in the global trading system, not just among WTO members, but among all stakeholders, including the academic community. With the joint report, the four organizations sought to get a dialogue going, and to lay out a framework that could help make that dialogue as substantive, objective and productive as possible.

A priority area is to improve transparency and analysis. That means we must up our game when sharing existing information, identifying data gaps and filling those gaps. And we must up our game when coordinating among ourselves to establish data collection priorities and tasks. As we do all this, we will need to involve other relevant institutions and disseminate the results of our efforts in ways that are easily accessible and user-friendly. With improved and coherent data, we can then bring the full analytical firepower of the four organizations to develop a better understanding of the actual effects of subsidy programmes, to what extent they achieve their stated objectives, at what cost, and what the impacts are on other countries.

Priority number two is to feed sound evidence and analysis on subsidies into dialogues across and within countries. The four organizations have several forums to discuss a broad range of essential issues, from improving existing subsidy schemes to minimizing their negative effects and from assessing their budgetary implications to measuring their environmental outcomes. It is critically important that governments and stakeholders make full use of those discussion spaces. This would add momentum towards more constructive and less destructive action on subsidies.

Priority number three is to support rulemaking efforts. In less than two weeks, ministers will be descending on Geneva for the WTO's 12th Ministerial Conference. There, they will seek to get results on fisheries subsides and agriculture, including subsidies-related elements. On industrial subsidies, discussions have intensified in recent times, but mostly outside the WTO. The Trilateral Joint Initiative by the European Union, Japan and the United States has raised concerns about the effectiveness of certain WTO rules and interpretations in dispute settlement. Interest in updating the rules has also been voiced by the so-called Ottawa Group, the G7, G20 and APEC. One way forward could be to have more focused and factual discussions, informed by sound economic and legal analyses, on the perceived shortcomings of existing rules and concrete ways to improve them. And we could also look at approaches taken in the context of regional trade agreements.

Dealing constructively with subsidies is essential to preserving the openness of the global trading system, reinvigorating efforts to reform it and averting fragmentation. But constructive engagement on subsidies will not come about overnight. It will require cooperation among governments to develop a common understanding of the role of subsidies in today's world. This report is a first step in the direction of informing a conversation that can contribute to that goal.