The book, Trade costs and inclusive growth: Case studies presented by WTO chair-holders, examines how the WTO’s Aid for Trade initiative can assist with implementing the Trade Facilitation Agreement (TFA), the importance of mainstreaming trade into national development strategies, and the potential impact of the TFA in various regions.

The book was launched at the opening of the WTO Chairs Programme (WCP) Annual Conference in Geneva. Initiated in 2010, the WCP aims to enhance knowledge and understanding of the multilateral trading system among academics and students in developing countries through teaching, research and outreach activities in academic institutions.

In his opening remarks at the event, WTO Deputy Director General Yi Xiaozhun noted that one important obstacle to increasing poor countries’ integration into global markets is high trade costs.

“There are many factors to high trade costs, including infrastructure deficiencies, lack of competition, etc.” DDG Yi said.  “However, burdensome trade procedures appear to be a significant contributor to those costs.  This suggests how important trade facilitation, and in particular the WTO’s Trade Facilitation Agreement, is to developing countries.”

While WTO economists have estimated the TFA could increase global merchandise exports by up to US$ 1 trillion per annum, with developing countries capturing more than half of the available gains, the publication acknowledges continued uncertainty among some developing countries and least-developed countries (LDCs) regarding the benefits of the Agreement.

“Our review of the economic literature on trade facilitation and the studies collected in this volume should lay to rest this uncertainty”, the editors of the book affirm. “Developing and least-developed WTO members should find plenty of useful lessons in these studies, authored by WTO chair-holders, as the research and conclusions drawn are firmly rooted in circumstances and challenges frequently encountered in the developing world.”

Particular attention is given to Africa and to Arab countries, and, “not surprisingly, the studies find that the gains that can be obtained are large,” according to the editors.

The TFA is unique in that the requirement to implement the Agreement is directly linked to each WTO member’s capacity to do so. In addition, the TFA states that assistance and support should be provided to help members achieve that capacity.

The book underlines that the readiness of the international community to provide such assistance is key in determining how speedily and fully the provisions of the TFA are realized. This point is reinforced by the studies in this book that show how Aid for Trade can and has played a catalytic role in making possible trade facilitation reforms.

It “is essential to assist developing countries, and particularly the least developed amongst them, to lower trade costs through trade policy reforms and implementation of the TFA,” assert the editors.

The TFA will enter into force once two-thirds of the WTO membership has formally accepted the Agreement. To date, 96 members have ratified, meaning that over 87 per cent of the ratifications needed for entry into force have now been received. 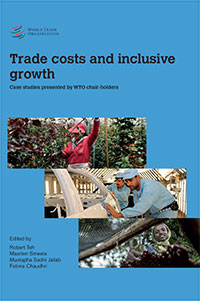