The unprecedented show of support by the leaders   President Mauricio Macri of Argentina, President Michel Temer of Brazil, President Horacio Cartes of Paraguay and President Tabaré Vázquez of Uruguay — comes as hundreds of trade diplomats, journalists and representatives of civil society gather in the Argentine capital for the latest biennial meeting of the WTO's highest decision-making body.

In their joint declaration, the four presidents reaffirmed the importance of the multilateral trading system as the “best way to take advantage of the opportunities and to face the challenges of international trade”.

They also underlined the importance of preserving and strengthening the multilateral trading system, including its dispute settlement system, in order to promote rules “based, open, transparent, inclusive, non discriminatory and equitable trade embodied in the WTO, providing it with the tools it needs to face the challenges of the 21st century”.

The joint statement of the four presidents was supported by representatives of Colombia, Guyana, Mexico, Peru and Suriname, who also signed the declaration at the conference's opening ceremony.

“Trade has been a key source of growth and development,” Argentina's President Macri declared.  “However, we know that the benefits haven't been shared by everybody, and that has given rise to challenges and a questioning of economic globalization.”

“It is our joint responsibility to rise to the challenges of the 21st century and ensure that they become opportunities for a more inclusive future,” he continued.   “As the host country, we want to set the basis for the discussion on how to make the multilateral trading system more efficient, to help it become an engine for development.” His full speech is available here.

WTO Director-General Roberto Azevêdo welcomed the joint declaration of support.  “This is a huge display of commitment to the idea of free trade as a force for good, and to the multilateral trading system itself.”

“By any objective measure, the multilateral trading system has delivered,” DG Azevêdo said, noting the 26-fold increase in global trade since the signing of the General Agreement on Tariffs and Trade — the WTO's cornerstone agreement — 70 years ago.  “It is a rare example of effective, functioning, vibrant multilateralism — with all the hard work, difficulty, and effort that this can sometimes entail.”

“The system has helped to build prosperity around the world,” he continued. “It has helped to lift a billion people out of poverty in a generation.  It has been tested — and it has held firm.”

DG Azevêdo noted that during and after the financial and economic crisis in 2008, the world did not erect trade barriers as in the past. Less than 5% of world imports have been affected by restrictive measures since the crisis. In comparison, global trade shrank by two thirds during the Great Depression of the 1930s, when protectionism was rampant.

“Trading nations held each other to the commitments agreed multilaterally,” he said. “As a result we avoided unilateral actions, potential trade wars and economic catastrophe.”

“In the heat of crisis, the WTO did what it was created to do. And it will continue to provide stability and certainty — especially in challenging times. That's why I'm so relentless in beating the drum for the system. Not because it's perfect, but because it's essential, it works, and it's the best we have.” His full speech is available here.

The 11th Ministerial Conference (MC11), which will run until 13 December, is being chaired by Minister Susana Malcorra of Argentina.  Trade officials will discuss a range of issues over the next three days, including agriculture, development, fisheries subsidies, domestic regulation of services, and electronic commerce. 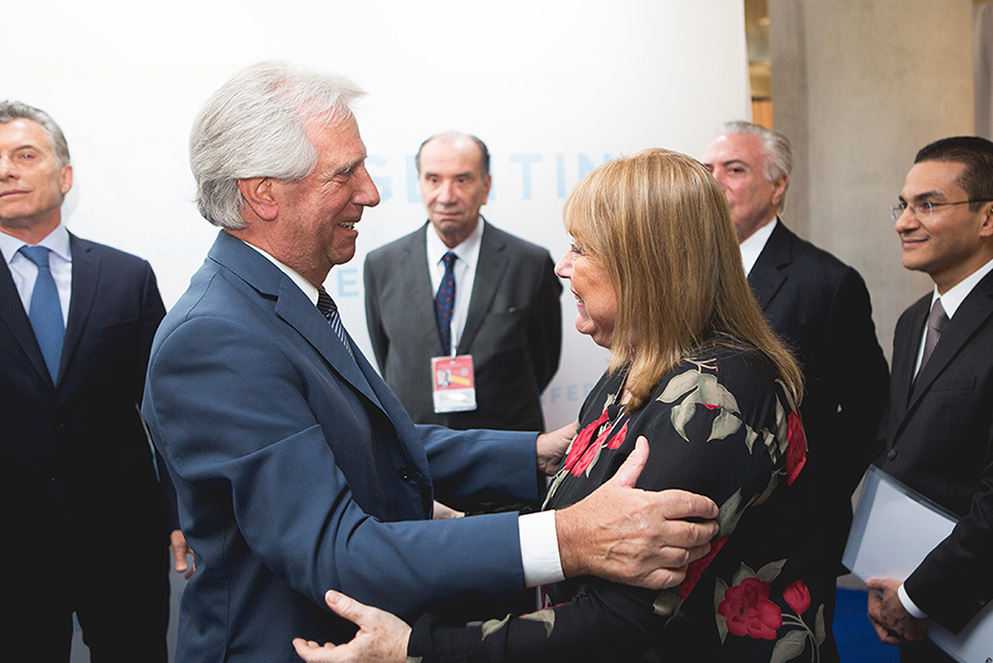