In the opening plenary debate dedicated to the theme "Trade: Behind the Headlines," Director-General Roberto Azevêdo asked participants to consider how the trading system needs to be improved in order to respond to the challenges facing the global community.

"People are hurting," DG Azevêdo declared.  "Many, many feel disconnected from economic progress.  This is clearly the case in a number of developed countries.  And in developing countries, the persistent challenges of poverty and development remain as pressing as ever."

"Even if you argue – as I would – that trade is essential for growth, development and jobs, you have to accept that we drastically underestimated people's dissatisfaction with the status quo," he added.  "We cannot ignore this.  We need to adjust and react.  And an important part of that is to hear those concerns in our discussions at the WTO."

The annual Public Forum is the WTO’s flagship outreach event, with more than 2,200 participants registering for this year’s gathering. The event provides a unique platform for senior officials, leading global businesspeople, academics and civil society representatives to come together and discuss some of the major trade and development issues of the day.

This year's Public Forum takes place at a time when the debate on trade and its benefits has rarely been as prominent or controversial.  The theme of "Trade: Behind the Headlines" offers an opportunity to go beyond the rhetoric and examine in detail the realities of trade – the benefits it offers and the challenges it can bring.

Bruce Stokes, Director of Global Economic Attitudes at the Pew Research Center, said it was important not to underestimate the social impact of what he described as "change on steroids".  Many people in the developed world, particularly those without a degree, feel uneasy with the current pace of globalization.

"Overwhelmingly people feel trade is a good thing. But we have to put ourselves in the shoes of those with no high school education who feel left out."  And while the public worldwide is generally supportive of trade, fewer are inclined to believe that trade creates jobs, lifts wages, or lowers the cost of goods for consumers, he noted.

Christine Lagarde, Managing Director of the International Monetary Fund, said trade has helped lift hundreds of millions out of poverty and improved living standards worldwide. However, there is also the perception that trade has contributed to growing inequality within countries, which proponents of trade "have collectively failed to address".

"The new trade agreements being discussed are now tackling issues of labour disruptions," she noted, but "it cannot all be blamed on trade, all policies matter."  Countries such as Singapore, Germany and Denmark are examples of countries offering new solutions at the domestic level to help those who have not gained from trade.

Susana Malcorra, Minister Advisor to the government of Argentina, said the experiences of her country showed the importance of having long term policies that allow for good planning and predictability.

"We have gone through periods of being totally closed to being open at a level that was irresponsible," she said.  While closing borders has contributed to Argentina's high poverty level, opening too quickly "risks leaving too many people behind… we need to allow for transition and make the private sector understand the need for adjustment."

New York Times columnist and Nobel Prize winner Paul Krugman said textbook economics never claimed growing exposure to trade would be painless, but what economists like himself may have missed is the extent to which the sharp growth in global trade has also produced sharper-than-expected income redistribution effects and transitional costs.

"We've made mistakes, we underestimated the amount of pain being caused, but it doesn’t mean we should be turning our backs on the global economy now," he said. "The explosion in trade in some ways is already in the rear-view mirror, it's already plateaued, if we turn our backs on trade now it would be highly disruptive."

Strive Masiyiwa, Founder and Executive Chairman of the South Africa-based Econet Group, said that greater international integration has been "tremendously beneficial, both in terms of connectivity and ability to trade".  But the fact remains that, with 300 million young people already looking for work on the continent, Africa is not seeing enough job creation to put a dent in these numbers.

"Capital is not available to African entrepreneurs. That’s where we need to be spending more time," he said.

Mr Masiyiwa also said proponents for trade need to be more vocal in making their case.  "Those of us who believe in the benefits of free trade have to step up and articulate it. We have to show a passion for what we believe in.  We’re like deer in the headlights. It's a debate that should have been settled long ago."

Naushad Forbes, co-chairman of Forbes Marshall and former president of the Confederation of Indian Industry, said the growing employment and improved productivity he and thousands of other Indian companies have experienced "all come from the opportunities trade and integrating in the global economy have provided us".

The challenge is to establish simple and transparent rules which would help more small and medium sized companies share in these gains, he argued.  The WTO's new Trade Facilitation Agreement can serve as a basis for the implementation of such policies and help smaller firms create more jobs.

Ms Malcorra, who will chair the WTO's 11th Ministerial Conference in Buenos Aires next December, said the meeting will provide governments with an opportunity to reaffirm and reinforce their commitment to the multilateral trading system and the benefits it brings.

"There has to be a meeting of minds that recognizes that, as imperfect as the current system might be, we need the system, we need to find ways together to move forward and recommit to this collective effort," she declared. 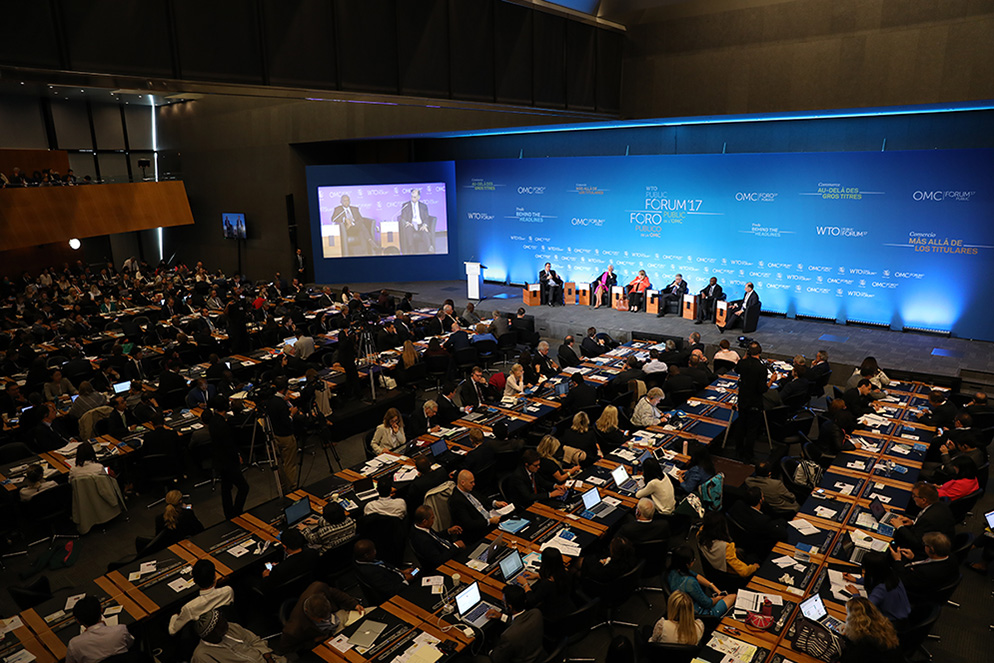