The meetings included the informal ministerial gathering on WTO issues hosted by the Swiss government on 25 January. This discussion largely focused on possible reforms to the trading system, with a range of different perspectives being aired. The need to address the impasse in appointments to the WTO's Appellate Body was a common theme, along with the need to make progress in a number of other areas.

DG Azevêdo also participated, by invitation, in a Canadian-organised ministerial meeting on WTO reform which took place on 24 January; a meeting on 25 January where a group of WTO members issued a joint ministerial declaration setting out their intention to launch negotiations on electronic commerce; and a range of discussions organized by the World Economic Forum throughout the week.

Speaking at the conclusion of his program in Davos, the Director-General said:

"Trade has been at top the of the agenda in Davos. We had some very productive discussions this week across a range of meetings, and notably we've seen real progress towards negotiations that were announced on e-commerce. This is all very welcome. It is a sign of the strong and very widely-shared commitment to the global trading system. This is particularly vital now, as we face a number of significant challenges."

"The current trade tensions pose a threat to the entire international community. The risks are real and have real economic effects. But the opportunities are real too. It is in everyone's interests that we improve prospects for global trade. It is vital for jobs, growth and development around the world. This is what the WTO is all about – so we are taking action."

"First, by working urgently to ease tensions. We're facilitating conversations between members, complementing bilateral efforts. And we're helping members to resolve their disputes. Second, we are working to modernise and strengthen the global trading architecture to ensure that it can support a changing global economy. These are the key elements that we have been discussing here this week.

"The word we keep hearing is 'reform'. Members are exploring possible reforms that would help to diffuse the current tensions, fix the impasse in appointments to the Appellate Body, improve monitoring and transparency in the system, and speed up our negotiating processes both on the longstanding issues and on other initiatives that been launched more recently."

"We must do more to make the WTO work faster, and be more flexible and responsive to members' needs – building on the progress of recent years. The G20 leaders' declaration made this clear. It called for "necessary reforms" to the WTO so that it can keep playing its essential role in the global economy. All this has created a political window to modernize the WTO. We must seize that opportunity."

"We are working hard on all of this. 2019 will be a crucial year for global trade and for the WTO. We have an opportunity to tackle the systemic challenges before us and strengthen the WTO for generations to come. Ultimately our success will depend on whether members are ready for the system to evolve."

For the Swiss-organised informal ministerial gathering, the closing remarks by the Chair of the meeting, Federal Councillor Guy Parmelin, are available here. The meeting was attended by representatives from a wide range of WTO members, including representatives of the WTO Least-developed countries Group, the WTO Africa Group, and the WTO Africa, Caribbean and Pacific Group. The attendee list is available here.

The joint statement on e-commerce is available here. It was signed by 76 WTO members, which account for 90% of global trade.

The joint communique from the Canadian-organised meeting on WTO reform is available here. 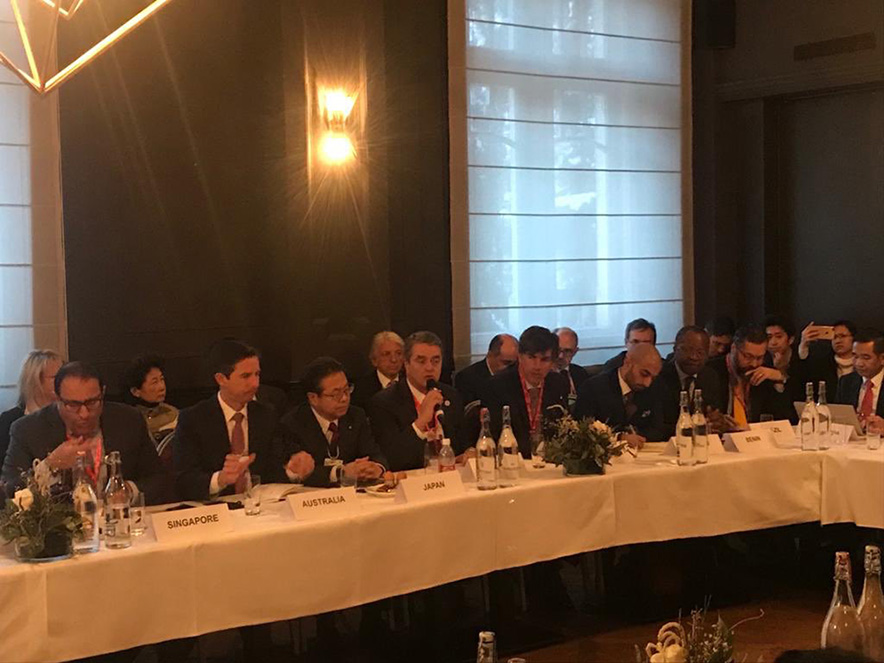