Trade's contribution to economic growth and sustainable development is "undeniable," the UN Secretary-General told members. But escalating trade tensions over the past year "threaten growth in international trade and the very foundation of the rules-based multilateral trading system," he warned. "It is worth highlighting that when trade tensions rise, there are no winners, only losers, especially among developing countries."

He stressed that WTO reform efforts should be guided by the imperatives of the UN's Sustainable Development Goals (SDGs). In this context, Guterres welcomed various initiatives already under way at the WTO to address different areas of relevance to the SDGs, such as eliminating harmful fishery subsidies, helping developing countries access generic medicines at more affordable prices, and improving transparency on agricultural subsidies in order to enhance efforts to achieve food security and follow more sustainable agricultural practices.

"If WTO reform is to effectively respond to this challenge, it must be meaningful, fair, legitimate and sustainable," the UN Secretary-General declared. His full speech is available here.

"Yet, at this crucial moment, the multilateral system also faces huge challenges. The question is being asked about the effectiveness of global cooperation in its current form. We see this reflected in the WTO."

"The tensions between major economies are playing out here in this organization," he continued. "We are working hard to help deal with members' concerns, resolve disputes and urgently reduce tensions."

DG Azevêdo noted that some see reform of the WTO as an essential step in resolving those tensions. "It is certainly clear that we have an opportunity now to renew and strengthen trade multilateralism for some years to come. And I think in the interests of all our members, we must seize it.". His full speech is available here.

General Council Chair Sunanta Kangvalkulkij said the visit of Mr Guterres was a momentous occasion for the WTO and "sends an important signal to the world about our firm commitment to multilateral cooperation, in support of our shared objectives of economic growth, stability, poverty reduction, and sustainable development".

"Multilateralism is a public good – and though it may not always be easily accomplished, it is essential that we protect it for the peace and prosperity of all, now and in the future," she added.

The webcast of UN Secretary-General Guterres's speech as well as the remarks of DG Azevêdo and General Council Chair Kangvalkulkij can be found here. 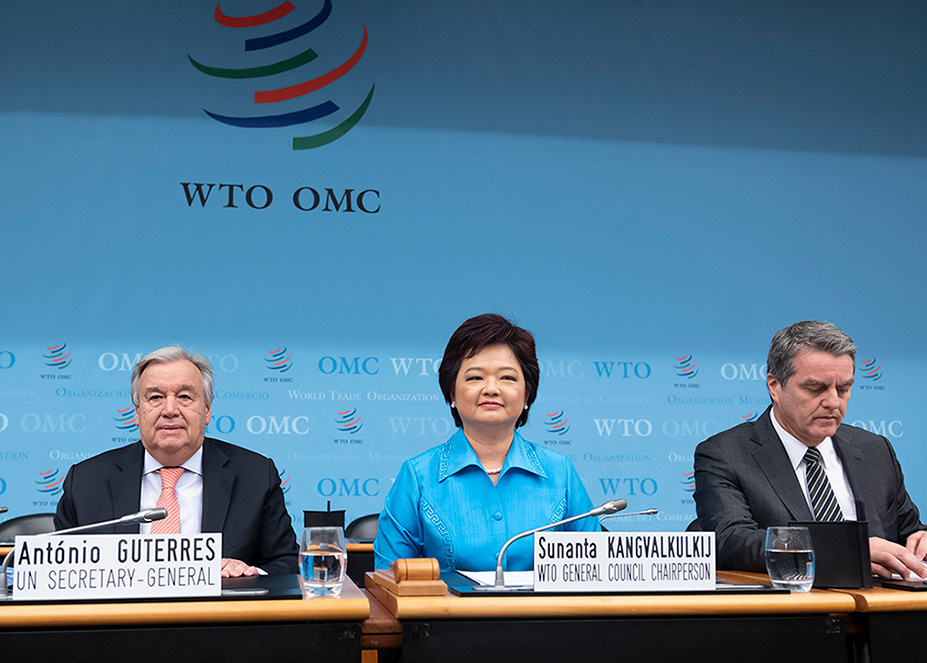