As part of the WTO's Eighth Triennial Review of the TBT Agreement, which was adopted in November 2018, members agreed to hold thematic sessions on relevant TBT issues alongside  the regular meetings of the committee, and agreed that the first two sessions of 2019  would  focus on good regulatory practices and conformity assessment procedures. Webcasts of the two sessions are available here:

The session on good regulatory practices focused on domestic committees and other administrative mechanisms that members have established to facilitate internal coordination on TBT matters. Members heard presentations on national experiences from Kenya, Indonesia, New Zealand, Chile, China, Guatemala, and the United States.

The session on conformity assessment procedures focused on market surveillance as well as controls and risk assessment. Members heard presentations from the the US, the European Union , China, Chinese Taipei, Japan and Australia regarding their national practices in these areas, as well as private sector perspectives on the issues.

Throughout two-day TBT committee meeting, WTO members discussed 59 specific trade concerns, including 11 new concerns. Below is a summary of the new concerns. A full list of the trade concerns is available here. For more information on previous trade concerns see the 14-15 November 2018, 19-21 June 2018 and 20-22 March 2018 meeting summaries.

The Dominican Republic expressed its concern with a recently adopted law in Israel restricting the advertising and marketing of tobacco products. The law specifically requires that tobacco products be packaged in an unattractive brown packaging and that no signs of trademarks be visible on the packaging.  The Dominican Republic said that it supports effective tobacco control measures, including those aimed at reducing smoking, but expressed concerns that such measures would adversely affect competitive opportunities for its exports of tobacco products.

Israel said it submitted a notification of the proposed regulation to the TBT committee in January 2014 and that the recently-adopted regulation has a one-year implementation period in order to to allow trading partners time to make  necessary adjustments.

2. Trinidad and Tobago – Ban on plastics

The Dominican Republic expressed concerns with Trinidad and Tobago's ban on the commercialization and import of polystyrene products, which includes plastic cups,  food containers, plates and other utensils. The Dominican Republic noted that this measure  was notnotified to the WTO,that it is more trade restrictive than necessary, and that it discriminates against imports.

China, the US and Japan expressed their concern with a recently-revised measure from the European Union regarding energy efficiency requirements for electronic displays and a ban on some display components.  The revised regulation alters the scope and requirements of an earlier notified measure, and members were concerned that the EU did not provide an opportunity to comment on the revisions. The three urged the EU to re-notify the measure, allow for a period of comment, and clarify the provisions on the banned items.

The EU said that the new requirements promote energy efficiency and the circular economy by improving the durability, reparability, and recycling of products. The EU said that it had received comments on the initially notified measure from some WTP members and that the revised version is still under review within the relevant European Commission bodies.

Japan, Korea, the EU, and the US raised concerns regarding a recently notified measure by China concerning the approval (for new ingredients), production, labelling and advertising of cosmetics. Members noted timing differences between the market authorization for domestic products versus foreign products. Members urged China to follow international standards on good manufacturing practices for cosmetics. They further requested that China indicate the plans and timeframes for the adoption of the new regulation.

China said the revised measure is in response to the development of cosmetic industry in China and that it is in draft format. China took note of the concerns raised by members and said it will provide responses at a later stage.

The United States said it was concerned with the lack of clarity in the development of a proposed amendment to Korea's Public Health Promotion Act requiring new graphic warning labels on alcoholic beverages. The US said that while it supported the objective of managing the public health challenges related to drunk driving, it was concerned that this lack of clarity could result in an unnecessary disruption to trade. The US also asked Korea to make available details of its new graphic warning labels, and said the measure should be properly notified to the WTO with sufficient opportunity for members to comment.

Korea responded that the draft regulation is being assessed by the relevant regulatory agencies and that it is preparing a notification for the WTO on this issue.  Korea stated its commitment to communicating effectively with stakeholders during the regulatory process.

Costa Rica, the US, the EU, and Guatemala expressed concerns regarding Uruguay's proposed law on the labelling of ready-to-eat packaged food products. The proposed law requires a mandatory front-of-pack nutritional label indicating whether sodium, sugars, fats or saturated fats have been added during preparation. While acknowledging the legitimate health objective being pursued by Uruguay, members considered the measure as unnecessary given that less burdensome alternatives exist.  They also said the law was not based on relevant international standards, such as those of the Codex Alimentarius Commission (CODEX). Uruguay was also asked whether it had conducted studies concerning the specific labelling design requirements being proposed, and how alternatives had been evaluated.

Uruguay noted that the deadline for comments on the proposed measure was being extended until 30 March 2019. Uruguay considered that this proposal is justified as it is a legitimate reaction to the obesity epidemic, one of the largest causes of mortality affecting children in Uruguay. The proposed regulation is based on a series of international guidance documents, including those from the World Health Organization and the Pan‑American Health Organization, which explicitly includes front-of-pack nutritional labelling as effective parts of a larger public health toolkit.

Brazil, Colombia, Costa Rica, Ecuador, Guatemala, Honduras, Panama, Paraguay, the US  and Canada all expressed concern with the EU's proposed non‑renewal of market authorization for chlorothalonil, a fungicide used on many agricultural products exported to the EU, including, coffee, almonds, bananas, citrus fruits, cranberries, papaya and watermelon. They are concerned that the non‑renewal was not founded only on a proper risk-analysis, and without considering existing CODEX maximum residue levels (MRLs). They also noted that chlorothalonil is currently authorized for use by many countries.

The European Union said that its decision followed an extensive peer review process conducted by the European Food Safety Authority. This review concluded that chlorothalonil should be classified as carcinogen category 1B while acknowledging that several areas of the risk assessment could not be finalised due to insufficient data. The EU also said that this decision would not lead to immediate disruptions in trade because the purpose was not to amend the MRLs for this pesticide, and that a grace period for the use of products containing chlorothalonil would also be provided. The EU added that the possibility of granting transitional measures would be considered when the process of proposing any changes to existing MRLs starts.

Brazil, Colombia, Costa Rica, Ecuador, Guatemala, Honduras, Panama, Paraguay and the US considered that the 6-month transitional period given by the EU before its new maximum residue levels (MRLs) for pesticides enter into force is insufficient to allow exporters to adapt, in particular exporters from developing, tropical countries.

The European Union said that the setting of minimum residue levels for pesticides is more suited for discussion at the committee on sanitary and phytosanitary (SPS) measures, not the TBT committee. The EU nonetheless informed members that a transitional period of 6 months is normally granted when MRLs are lowered, so that third countries and food business operators can prepare themselves to meet the new requirements. The EU also noted that products that are on the market before the application date may remain on the market, if high-level consumer protection guarantees are provided.

The Dominican Republic was concerned that Jamaica's prohibition on the production and importation of single-use plastic products could be discriminatory and lead to inconsistencies. It also considered the prohibition itself to be more trade-restrictive than necessary given that less restrictive alternatives exist for attaining the policy objectives of regulating plastic products.

Jamaica said it would reflect on the Dominican Republic's concerns and revert back with a more substantive response at a later stage.

China expressed its concern with a new Korean regulation regarding energy efficiency management equipment. China noted that the one-month transition period provided was less than the recommended six-month transitional period and that domestic enterprises were allowed a longer transition period. China also suggested that Korea establish technical requirements based on the performance of the products rather than their design.

Korea said that it would consider China's comments and revert to the matter in due course.

The European Union, supported by the US, expressed concerns with Saudi Arabia's new regulation requiring certain types of disposable plastics to be "OXO-degradable" and bear a specific mark to demonstrate compliance. The EU said that it appreciates Saudi Arabia's efforts in environmental protection, but it urged the kingdom to postpone the implementation of this measure until further scientific studies regarding the real environmental benefits of OXO-degradable plastics have been finalised and further exchanges on this matter have taken place.

Saudi Arabia said that it will delay the implementation of this measure until September 2019. Saudi Arabia said it launched a national study on the adverse impact of plastics on the environment, and asked the EU to provide any recent studies on this matter.

How WTO members have used the TBT Committee in 2018:

The Committee heard a report from the Secretariat on trends in notifications and specific trade concerns during 2018. Some of the key findings include:

Did you know that 2018 was noted as a record year for notifications? 3065 notifications were received, with African countries leading the way in submitting notifications. Find more information here. 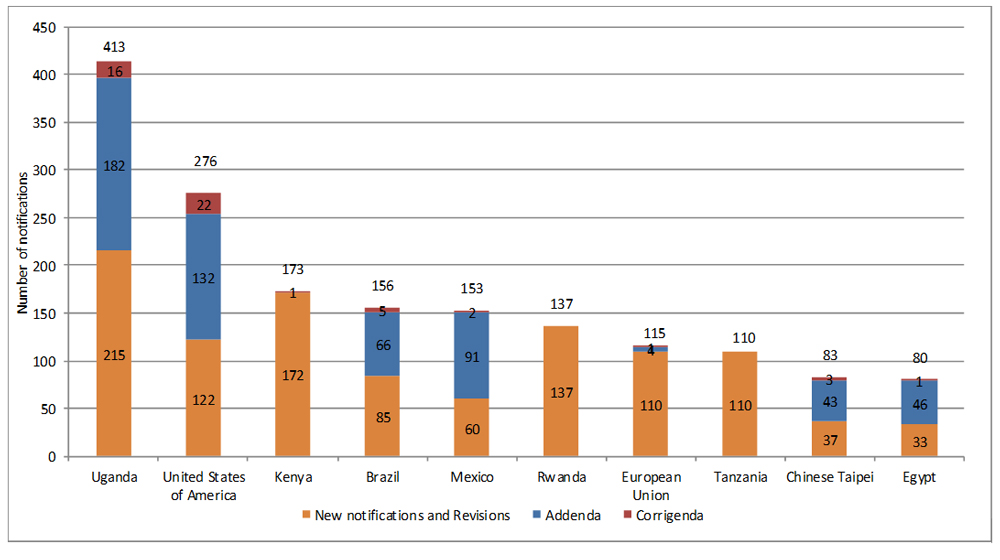 At a side event to the TBT Committee meeting on 7 March, the United Nations Conference on Trade and Development (UNCTAD) presented findings from a recent publication entitled: The Unseen Impact of Non-Tariff Measures: Insights from a new database.

The presentation by UNCTAD is available here.

Next Committee meeting is scheduled for 20-21 June 2019. The meeting will be proceeded by a thematic session on Transparency and an informal meeting on conformity assessment procedures, on 18-19 June.

The WTO works at its best when govts share info in a timely manner. One way to alert trading partners about changes in regulations is to notify them to the TBT Committee. 2018 was a record year for notifications. More transparency, less trouble at the border. #WTOTBT #ePingalert pic.twitter.com/iRvuyTcZs1

Problems viewing this page? If so, please contact webmaster@wto.org giving details of the operating system and web browser you