25TH ANNIVERSARY OF THE WTO

In his keynote address to the opening session of the event, Swiss Federal Councillor and Vice-President Guy Parmelin said the continued importance of the WTO and the multilateral trading system has been underlined by the current COVID-19 crisis, with global supply chains and open markets playing an important role in ensuring rapid access to medicines and other essentials needed to fight the pandemic.

“To the sceptics, I wish to remind them that international trade is part of the solution and not part of the problem,” he declared.  “Trade and health can and should be mutually supportive.”

More broadly, the rules established under the WTO framework ensure the open markets that are essential for rapid and sustainable economic recovery from the pandemic crisis, Mr Parmelin noted. “These rules are the best defence against protectionism … they have rarely been as important as they are today, because we need open markets to get out of this crisis.”

“The current crisis has once again demonstrated our interdependence and the importance of cooperating to find solutions to contemporary problems,” he said. “Let us take advantage of this crisis to get the organisation back in shape for the rest of the 21st century!” Federal Councillor Parmelin's speech is available here.

David Walker, New Zealand's Ambassador to the WTO and current Chair of the WTO's General Council, said there was “a lot that we can be proud of” in the 25-year history of the organization. “For all the criticisms, the WTO has played a central role in helping support the strength and stability of the global economy.”

“At the same time, the world now is a very different place than it was in 1995,” he noted. The ability of members to update and adjust the WTO's rules to the changing conditions of trade “is ultimately the only way to keep the WTO relevant to our economies and to foster our trade relations”.

The WTO “made a quick start” with agreements in its infancy before entering its more challenged “teenage years”, a period which nevertheless saw the conclusion of the Trade Facilitation Agreement and the historic outcome on the elimination of agriculture export subsidies.  Early adulthood has been “more problematic”, Ambassador Walker admitted, but that should not lead to the conclusion that members cannot come together again to ensure the WTO remains fit for purpose.

“WTO members need to grasp their inner 25-year-old — old enough to realise it’s time to change, and young enough to do something about it,” Ambassador Walker said.

While commemorating the past, Deputy Director-General Alan Wolff said the focus “should firmly be on the future” and putting into place institutional and substantive reforms needed to carry out the WTO's mission.

A WTO of the future “will be more effective and resilient”, he argued, “with improved governance by its members, served by a proactive independent secretariat that acts as the guardian of the world trading system, tasked with monitoring, providing analyses, initiating proposals and increasing accountability with WTO disciplines.”

“The path forward will most often not be easy,” DDG Wolff warned. “A very substantial investment of time and energy will be needed from all WTO members, imbued with a renewed sense of common purpose.” His remarks are available here.

In a separate panel session offering political perspectives on the WTO's past, present and future, China's Vice Minister of Commerce Wang Shouwen said the WTO has made a historic contribution to boosting living standards and lifting hundreds of millions of people out of poverty. Even in the shadow of the COVID-19 crisis, members have largely adhered to the principles of the WTO and adopted measures that facilitate rather than hinder trade.

The decision to create the WTO 25 years ago has “definitely proven to be on the right side of history,” Minister Wang declared.

Despite this, there are concerns among some about the WTO's future, triggered by the inability of members to resolve their differences over issues such as restoring the Appellate Body, appointing a new Director-General and addressing trade-distorting farm subsidies, he noted. Others, however, are hopeful that the WTO can still deliver, as demonstrated by the engagement of members on advancing issues such as new global rules on electronic commerce and investment facilitation for development.

European Union Director-General for Trade Sabine Weyand said the principles upon which the WTO is founded — non-discrimination, sustainability, predictability, fairness and progressive liberalization — are more necessary than ever in order to pull the global economy out of the current crisis.

“Unfortunately, the rules-based multilateral trading system has been in crisis for a few years,” she declared. “The WTO lacks a common sense of purpose and has not adapted to the changes that have shaped the global economy over the last decade.”

“This is why we are putting WTO reform at centre stage,” she declared.  Such reform “needs to build upon the basic principles of the system that remain as valid as they were in 1995”.

Cheryl Spencer, Jamaica's Ambassador to the WTO and Coordinator of the African, Caribbean and Pacific (ACP) group of members, said the WTO has had success in resolving trade disputes and providing incentives to developing countries and least developed countries (LDCs) to reform their trade policies.

Unfortunately, she added, experience has shown the WTO's contribution to development and helping poorer members better integrate into global value chains has been disappointing. This is illustrated by the continued small share of LDCs in overall world trade.

Rwanda's Minister for Trade and Industry Soraya Hakuziyaremye cited the importance of the new African Continental Free Trade Area and said her country looked forward to the WTO's support in ensuring the agreement will bring more prosperity and a brighter future to Africa through more open trade.

Minister Hakuziyaremye said the WTO's next Ministerial Conference will be important in providing meaningful guidance in efforts to preserve the multilateral trading system, and she encouraged WTO members to show “political commitment” towards completing current outstanding negotiations.

Former Singaporean Foreign Affairs and Trade Minister George Yeo agreed that the structure and processes of the WTO “no longer fit the realities of the world today”, which include the emergence of China as a leading trading nation and decreased political support for the organization in the United States.

Under current institutional arrangements, “it is difficult to begin a process of reform,” he maintained.  Before anything can be done, members must first reach a consensus on the appointment of a new WTO Director-General.  “Then we must collectively agree to empower her for the specific purpose of WTO reform, and to put up a first draft proposal for initial discussion.”

United States Ambassador to the WTO Dennis Shea said that while the US welcomed the commemoration event, “we can't be but mindful of the substantial work that must be undertaken if the WTO is to convene a similar event in 25 years' time”.

“We need a core understanding of shared values if we are to navigate the future,” he said, citing fairness and open markets as examples of those values. “But not all members share this view today.”

A third session at the 25th anniversary event allowed representatives from the private sector, civil society, media and international organizations to exchange views on how to ensure that the multilateral trading system better reflects the needs and expectations of society as a whole and how it can be more inclusive, particularly in regards to the needs of the poorest countries, small business, women and youth. 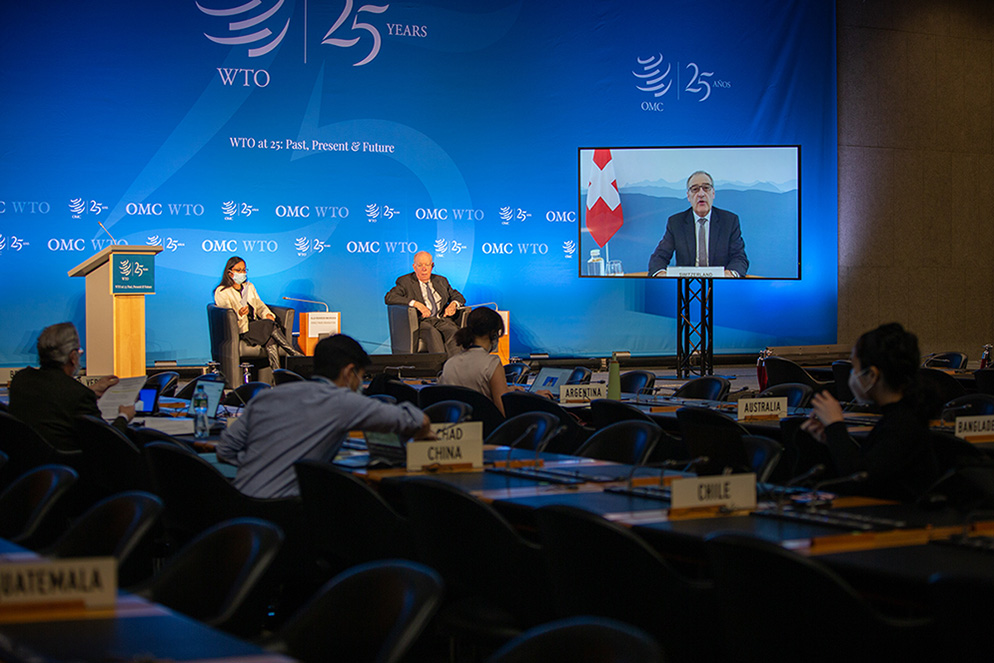