At the centre of the discussions was the chair's new report entitled “Elements and processes for a possible outcome in agriculture at MC12” (JOB/AG/180). The document was intended to serve as a basis for members to narrow down the scope of negotiations and determine the contours of a draft text “which would be adopted by members at MC12.” Members also considered three new submissions.

The United States submitted a paper entitled “Notification of select domestic support variables in the WTO” (JOB/AG/181). The paper identifies several areas within the domestic support pillar where members have been following different notification practices and where agriculture committee discussions are driven by inquiries seeking to gain further transparency.  Members welcomed the US submission for its detailed information and comprehensive analysis. The US said it would explore discussion of this matter in the regular Agriculture Committee meeting. It reiterated the submission was meant to support “a technical discussion” on transparency, not to reflect any negotiating position.

The second new submission entitled “Formula for reduction of trade-distorting support” (JOB/AG/182) from the Russian Federation provides concrete examples for the reduction of trade-distorting support by applying the formula proposed in its previous document (JOB/AG/172.) Some members raised questions to seek further clarifications on some of the technicalities of the paper.  The Russian Federation said it had used a new approach based on the actual economic performance of members in order to try to avoid the failures encountered with old approaches.

The chair invited members to build on the elements listed in his report, including:

Some developing members insisted that the priority should be given to addressing the aggregate measurement of support( AMS) beyond de minimis. Meanwhile, a point was also made by several members that transparency could be a standalone outcome as it is “of equal importance to the substance”. Notifying the value of total production (i.e. the base for calculating a member's de minimis subsidies) could be a starting point for improving transparency, one member suggested.  The view was also expressed however that while important, transparency alone could not constitute a sufficient outcome.

In conclusion, the chair noted again the importance of addressing the domestic support pillar before addressing other issues. He confirmed that most members embrace two chief elements: the need to reduce trade-distorting domestic support and to strengthen transparency. Current proposals have indicated a direction that may be taken, but a lot of work still needs to be done, he said.

The chair proposed the following four elements for members' deliberations in the context of an outcome at MC12:

The first three elements are in the spirit of enhancing transparency and facilitating agricultural trade without altering the core market access commitments that members currently have in their schedules. The fourth element alludes to some broad principles for a possible market access negotiating framework to which members may consider subscribing.

A number of members expressed interest to examine the issue of transparency of changes in applied tariffs and  the treatment of shipment en route. The suggestion by Russia that TRQs (i.e. by which imports within the quota pay a lesser tariff than those outside the quota) should be administered transparently was positively acknowledged at the meeting; however, some members considered the specific issue to be better addressed in the regular sessions of the Agriculture Committee.  Meanwhile, a number of developing members preferred to make progress on tariff simplification (i.e. converting non-ad valorem tariffs to ad valorem tariffs), while some others expressed caution in singling out this technically complex topic. The need to pursue negotiations towards broader market access reforms was also acknowledged.

The chair confirmed the clear interest in this pillar and reiterated the necessity to include market access elements when determining the contours of the overall agriculture outcome package for MC12. It is difficult but an outcome could be obtained through incremental steps and flexible approaches, the chair said. He hoped that all members who took the floor could lead the way.

The Cotton 4 (Benin, Burkina Faso, Chad and Mali) circulated the Koudougou Ministerial Declaration on Cotton, adopted by the Cotton 4  on the occasion of their coordination meeting held in Burkina Faso on 27-29 February (TN/AG/GEN/50 and TN/AG/SCC/GEN/21). Recalling the WTO's mandate on cotton and vital importance of this issue to the cotton-producing and -exporting African countries, the Declaration urges members to address longstanding issues at MC12, in particular trade-distorting domestic support for cotton.

Several groups of developing country members expressed support for the Cotton 4 declaration. A few members highlighted the importance of transparency in cotton before dealing with the thorny issue of domestic support reduction. Several members also reaffirmed their willingness to continue engaging on cotton development assistance, including cotton by-products.

The chair recalled the tireless efforts made so far while noting the absence of any sign of convergence. The chair therefore urged once more all members with a direct interest in this issue to be fully engaged and to explore all possible options to move forward.

The chair recalled that proponents on this topic had focused in their recent discussions on how to improve transparency and monitoring of the December 2015 Nairobi Ministerial Decision on Export Competition, including by improving the response rate to the annual questionnaire on export competition (ECQ), the completeness and accuracy of members' replies or the provision of contextual information.

Canada, with the support of several proponents, confirmed ongoing outreach efforts to develop some specific proposals in this regard, as part of their continuing efforts to address the unfinished business in the pillar, such as through enhancing disciplines on export credits, export credit guarantees/insurance programmes, agricultural exporting state trading enterprises and international food aid.

The chair's report highlighted two main elements in which there is the possibility of achieving an outcome for MC12:

The interventions confirmed widespread support for the first element.

Regarding the second element, the proponents stressed the necessity to continue the work on all the issues covered in this area, while some developing countries reiterated their concerns regarding possible additional administrative burden and risks of market manipulation.

The chair's report laid out the elements for a permanent solution, including suggestions on the core provision, product coverage, programme coverage, transparency, anti-circumvention and safeguards as well as a monitoring mechanism.

The main proponent, the G33 (a group of developing countries), and some other developing members restated the urgent need for fulfilling the mandates on the PSH pillar by MC12. Meanwhile, one question was put forward again by non-proponents on the interaction between the demand for subsidy reductions under the domestic support negotiations and the demand for increasing the same support under the PSH discussions.

The chair noted that the main obstacle in the SSM negotiation resides in its linkages with market access. He also made some observations on the recent discussions concerning, inter alia, the relationship between an SSM and subsidized imports  or the possibility of the Uruguay Round negotiations on the special agricultural safeguards (SSG) inspiring the SSM negotiations. This was with the expectation that the ideas and elements in these discussions may possibly pave the way for a constructive engagement among members on SSM, the chair said. Developing member proponents rejected the link between SSM and market access. They were also of the view that domestic support reform alone cannot address the challenges that they seek to address through an SSM.

Special session on the Global Forum for Food and Agriculture

The German government organized a side event to discuss the communiqué signed by 72 agriculture ministers at the Berlin Global Forum for Food and Agriculture.  Recalling ministers' strong commitment to strengthen the WTO for achieving sustainable agriculture trade, members stated their readiness to build on this effort and take necessary actions to reform the agriculture sector at MC12.

The chair stressed that March would be critical for agriculture negotiations and asked members to deliberate on his report further and come back with more concrete proposals and ideas in the next negotiation meeting.  He also plans to continue intensive consultations with members in coming months.

The next meetings of the Agriculture Committee in special session are tentatively scheduled for 23-24 March and 23-24 April.
See the glossary for all agriculture terminologies 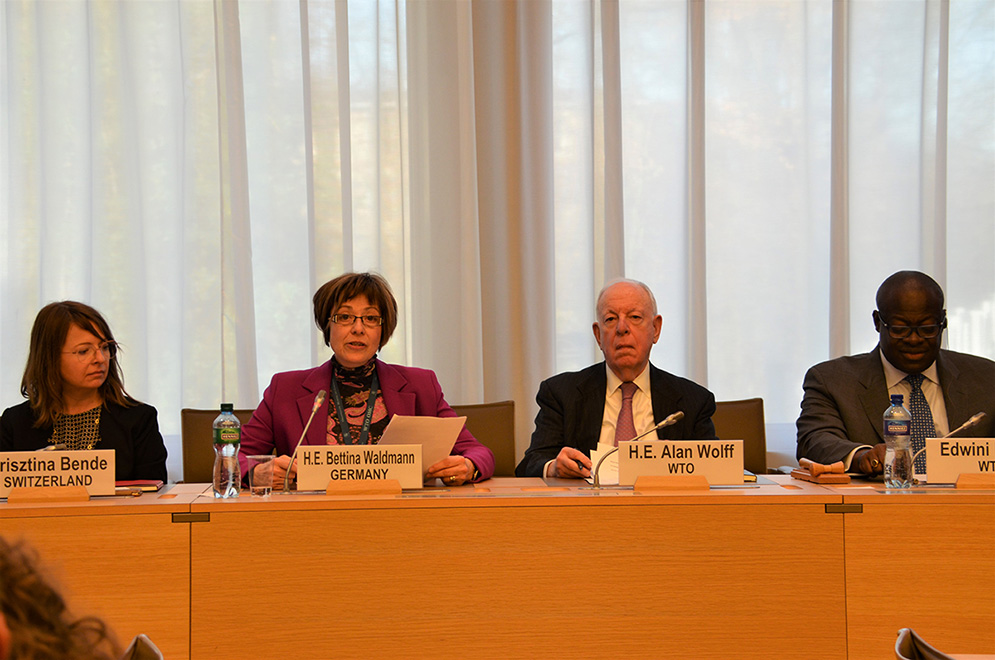