The meeting took place shortly after 18 members of the Cairns Group of major agricultural exporting countries released at the World Economic Forum meeting in Davos on 24 January a blueprint outlining their negotiating proposal. The document states their readiness to at least halve all forms of trade and production-distorting agricultural subsidy entitlements by 2030. One member said it would not be acceptable if any agreement in MC12 does not include agriculture and that an outcome on domestic support should be delivered.

The negotiating proposal was introduced at the meeting by 19 WTO members (mostly from the Cairns Group). The proposal offered members new points for discussion on domestic support, a priority in the agriculture talks for the majority of WTO members. The proposal was supported by a new methodology paper submitted by Costa Rica. Other key objectives in the proposal include improving market access and addressing "unfinished business" on export competition.

China said per capita domestic support should be used as an estimate of potential distortions in farm trade and argued that looking at aggregate spending or entitlements would be misleading. One member welcomed China's approach, which focused on comparing per capita subsidies among 18 major agriculture traders. Another member also said China’s argument was “valid” but questions were raised by others as to how to evaluate the aggregate impact of these subsidy programmes.

The chair said he is preparing a negotiation framework paper which will be circulated in mid-February. It does not have to be something agreed upon by everyone, he said, but "hopefully by May, we will have something stabilized for Nur-Sultan".

The Russian Federation continued its efforts to push for enhanced transparency of applied tariffs, organizing a roundtable immediately after the meeting to deepen discussion on this topic.

The new submission by 19 members, mostly from the Cairns Group, included a goal of reducing the sum of trade-distorting domestic support entitlements by at least half by 2030 (JOB/AG/177).  The group called for reductions on all forms of trade-distorting domestic support, including under Article 6 of the Agreement on Agriculture (Domestic Support Commitments). The proposal asks WTO members to take on commitments commensurate with the potential impact of their subsidies on global markets.

Following its submission in June 2019 (JOB/AG/156), Japan presented a new paper on behalf of some members of the Group of 10 (G10). The paper looks at export-restrictive measures from 2013 to 2018 (JOB/AG/175). Utilizing AMIS data (a trade database covering 28 countries and four main agriculture commodities: rice, maize, wheat and soybeans), the paper notes that the average duration of measures was longer in this period than in the 2007-2012 period,  while export restrictions stipulated by Article XI:2(a) of the General Agreement on Tariffs and Trade (GATT) must be temporary by nature. The paper also highlights the absence of notifications of export restrictions from 2013 to 2018.

Russia's paper (JOB/AG/176) notes that despite the adoption of the Bali Ministerial Decision in 2013 to improve tariff rate quota (TRQ) utilization, TRQ fill rates declined in 2016. Russia called for enhanced transparency with regard to the availability of unused quota amounts to improve TRQ utilisation.

Indonesia, on behalf of the Group of 33 (G33), made a new submission on the SSM (JOB/AG/178). The paper recalls the mandates on the SSM issued at previous WTO ministerial conferences. Highlighting the persistent challenges caused by import surges and food price volatility in developing countries, the paper requests WTO members to engage with one another, with a view to reaching an outcome by MC12 on an effective and operational SSM. This should cover both price-based and volume-based triggers for use of the SSM, with no product limitations on its availability.

The submission by the G33 group (JOB/AG/179) reiterates that public stockholding is a critical policy for supporting farmers in developing countries because governments can be the buyer of last resort when markets are not functioning efficiently. It urges members to respect the ministerial mandate on public stockholding and to redouble efforts on delivering an effective permanent solution by MC12.

Several Cairns Group members said that their paper is balanced, representing the interests of both developed and developing countries. Many WTO members expressed support for the principle of "proportionality" in subsidy reduction commitments. Under this principle, "those that have more potential to distort global markets would contribute more to the reform process".

Explaining why all Article 6 subsidies should be targeted, one Cairns Group member said past experience has shown that a "cherry-picking" proposal is bound to fail and that no elements should be excluded. Costa Rica said that the "proportionality" methodology in its paper is only one possibility and welcomed other proposals. In conclusion, Costa Rica said it would issue a new submission soon.

Despite support for the paper issued by the group of 19 WTO members, a few members said discussions should focus on the most trade-distorting subsidies stipulated by Article 6.3 (Aggregate Measurement of Support, or AMS) and Article 6.4 (de minimis support) of the Agreement on Agriculture. The need to subsidize sensitive products for non-trade reasons was also highlighted.

A developed country insisted that Green Box support should  not be touched and said it will continue using this tool to "do good things" for its farmers.

Another member questioned whether there is enough time to resolve differences on domestic support issues. In its view, improving transparency remains a feasible outcome. It asked members to engage on other “equally important” areas, such as market access.

A developing country expressed support for China's per capita proposal. It said that as farmers with significant land in developed countries export most of their products, the subsidies they receive from government constitute de facto export subsidies. One member asked China to clarify its per capita proposal and argued against including it in new disciplines. China flagged there should be no uniform rules applying to WTO members at different stages of development.

A number of members supported Russia's call for enhanced transparency in the application of TRQs, whereby imports within a quota are eligible for lower tariffs than those outside it. Some members lent their support to the proposal in Russia's submission (JOB/AG/176) for the publication and notification of unused tariff quota volumes. Others highlighted the existing channels used to facilitate access to information on TRQs, including on unused quota volumes.  One member expressed reservations about adding new transparency obligations.

Several members underlined the importance of introducing market access reforms; caution was expressed by some about cherry-picking issues from the market access dossier. A number of developing countries expressed support for tariff simplification. The chair welcomed members' continuing engagement on market access.

One WTO member questioned how Indonesia, as a sponsor of the paper submitted by 19 members (mostly from the Cairns Group) and the G33 paper, sees the interaction between these two papers. The first paper, it said, calls for reducing trade-distorting subsidies whereas the G33 paper is asking for additional ways of providing subsidies. "They are not necessarily contradictory but it is something we need to consider," Indonesia said. It promised to respond to the question in due course.

One member was concerned about the impact of PSH programmes on global markets. It said developing countries did not make significant use of existing Amber Box support and could not justify the demand for additional avenues of support.

Some members said they understood the food security concerns but asked G33 members to be more creative in reaching their goal.

The chair expressed his "disappointment" on the state of play on PSH despite the "clear mandate" from previous ministerial conferences. He reiterated the need for "more details, flexible and creative ideas and new angles".

Some developing countries renewed their call for a positive outcome on the SSM, citing their experiences of import surges and the adverse impact on poor and vulnerable farmers. They also referred to existing distorting subsidies and artificially cheap imports. Some food-exporting countries shared the concerns expressed by the G33 on distorting subsidies and the resulting instability in the international agriculture market. They offered their support in addressing the source of those distortions without hindering progress on trade opening.

The chair said that more analysis and discussion will be needed to move forward with this topic.

A few members expressed their interest in looking at ways to strengthen transparency in export competition. One member proposed focusing on improving the response rate and quality of responses to the WTO's annual questionnaire on export competition.

Several members supported the need to enhance transparency in export restrictions, in line with the new submission from Japan. One member indicated that it could only exempt from export restrictions the purchases of food for humanitarian purposes by the World Food Programme on a case-by-case basis due to domestic food security considerations.

In the absence of the Cotton-4 members (Benin, Burkina Faso, Chad and Mali) due to a Cotton-4 ministerial meeting taking place at the same time in Burkina Faso, the chair noted that consultations should continue in the coming weeks on this important topic.

Russia highlighted the importance of enhanced transparency for applied tariffs as a way of enabling more effective integration of micro, small and medium-sized enterprises (MSMEs) into multilateral trade and global value chains. Participants in the roundtable included WTO members and representatives of the International Grains Council, the International Trade Centre and international chambers of commerce. The full programme of the roundtable is available here.

The chair said he was ¨very pleased¨ with the lively discussions and would intensify consultations with WTO members. He would reflect the ideas put forward so far into his upcoming report, which would aim at focusing the negotiations on more specific issues in the run-up to MC12.

The next meeting of the Committee on Agriculture in special session is scheduled for 24-25 February 2020.

See groups in the negotiations. 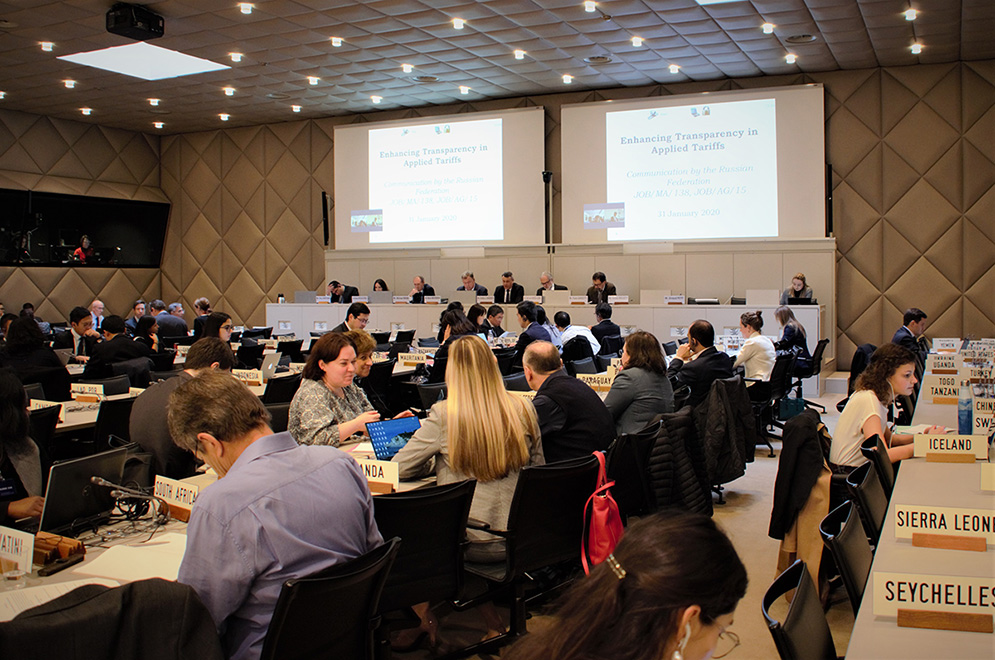