In its statement, Brazil said that it hopes to present its initial market access offer and to reply to a checklist of issues about its government procurement legislation as soon as the COVID-19 crisis allows a return to normal working conditions. This will be the kick-off for negotiations with other GPA parties.

“Brazil's application for accession is historic and recognizes the Agreement's importance and relevance,” said Carlos Vanderloo of Canada, the chair of the WTO's Government Procurement Committee. It is particularly notable “because Brazil is the first Latin American economy seeking to join the GPA”.

Brazil was granted observer status by GPA parties in October 2017. At that time, Brazil said its request reflected a desire from the Brazilian people to modernize the economy and improve the management of public resources. Brazil also noted at that point that it had negotiated government procurement chapters in regional and bilateral free trade agreements that were based largely on the provisions of the GPA.

The GPA is a plurilateral WTO agreement, meaning that not all WTO members are parties to the Agreement. It is open to all WTO members but is binding only for those members that have joined it. Each applicant's terms of participation are negotiated with GPA parties. These terms are set out in its respective schedule, which defines the party's commitments with respect to:

Currently, 48 WTO members (including the 27 member states of the European Union and the United Kingdom) are bound by the Agreement. Australia became the most recent member acceding to the Agreement in 2019.

The GPA aims to open up government procurement markets to foreign competition in a reciprocal manner and to the extent agreed between GPA parties. It also aims to make government procurement more transparent and to promote good governance. Reciprocal market opening assists GPA parties in purchasing goods and services that offer the best value for their money. The Agreement provides legal guarantees of non-discrimination for the goods, services and suppliers of GPA parties in covered procurement activities, which are worth an estimated USD 1.7 trillion annually. 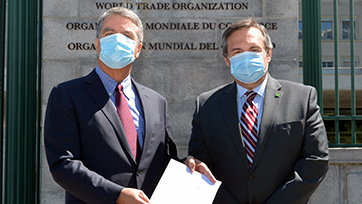