Towards the end of the annual gathering, the Swiss government convened an informal meeting of trade ministers on 24 January.

A recurring theme in their deliberations was the importance of the WTO dispute settlement system and the need to solve the impasse in its appeals stage. Ministers and senior officials also emphasised the need to deliver meaningful outcomes at the WTO’s 12th Ministerial Conference in Nur-Sultan, Kazakhstan, this June — particularly a multilateral agreement on disciplining fisheries subsidies. Calls were also made for progress in agriculture as well as the multiple joint statement initiatives in which groups of like-minded WTO members have been negotiating on issues such as investment facilitation, electronic commerce and services domestic regulation.

Earlier in the week, DG Azevêdo attended, at the organizers’ invitation, a Canada-led gathering on WTO reform as well as meetings of the groups of members negotiating agreements on investment facilitation for development and electronic commerce.

In addition to a number of bilateral meetings with political, business, and labour leaders, he participated in sessions organized by the World Economic Forum. While there was near-universal support for the WTO among his interlocutors, he felt a growing sense of urgency with regard to the ongoing reform process.

Speaking to ministers about his meetings in Davos, the Director-General said:

“I heard words of support for the WTO, the multilateral trading system, and its role in global economic governance, helping spur growth and development. But I still have to recall that the system is facing enormous challenges.

“2020 is a crucial year for the WTO. Concrete deliverables in Nur-Sultan would bolster the credibility of the WTO. It would prove that the WTO can adapt to the 21st century. The world economy is changing fast. Updated trade rules would give governments new tools to help businesses, consumers and workers thrive.

“On both dispute settlement and MC12, success will only be possible if members take an open-minded, business-like approach. We must be pragmatic, not theological, about finding solutions.

“Reform is essential for the WTO. This view is widely shared by members.

“WTO reform is — and should continue to be — an ongoing process of adapting to economic conditions and responding to members' concerns.

“Sitting on our hands in Geneva means an ever-widening gap between WTO disciplines and business realities. It means fragmentation, as rules are defined elsewhere — or left for unilateral action.

“Reform is, ultimately, the product of your decisions. With the DSU and MC12, we have windows of opportunity for positive change.”

The Swiss-organised informal ministerial gathering was attended by a representative cross-section of the WTO membership. An attendee list is available here. Closing remarks by meeting chair Federal Councillor Guy Parmelin are here.

Ministers from 17 members issued a joint statement on the WTO dispute settlement system, promising to work together to develop a multi-party interim appeal arrangement based on Article 25 of the WTO Dispute Settlement Understanding (DSU). Their statement is here.

The DG's statement to the investment facilitation joint initiative meeting is here.

The DG's statement to the e-commerce joint initiative meeting is here. 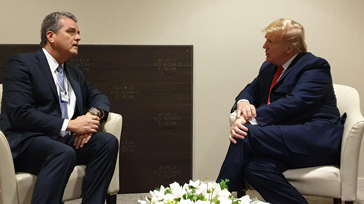 DG Azevêdo meets with the President of the United States, Donald Trump, at the World Economic Forum Annual Meeting in Davos, Switzerland. 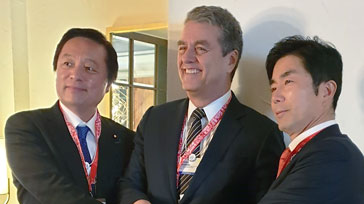