"The report makes clear that a substantial share of world trade continues to be affected by new and accumulated import-restrictive measures, which is cause for concern at a time when economies will need trade to rebuild from the effects of the COVID-19 crisis," said Director-General Roberto Azevêdo, who presented the report to WTO members. "On a more positive note, the report shows that members also introduced import-facilitating measures on an impressive scale, and have started to scale back trade restrictions introduced earlier in the pandemic,” he added.

The Director-General's full speech to launch the report is available here.

The report, which was reviewed at a meeting of the WTO’s Trade Policy Review Body, notes that 56 new trade-restrictive measures not related to the pandemic were implemented between mid-October 2019 and mid-May 2020 - mainly tariff increases, import bans, exports duties and stricter exports customs procedures. The new import restrictions covered traded merchandise worth an estimated USD 423.1 billion, the third-highest value since October 2012. WTO estimates indicate that the cumulative trade coverage of import-restrictive measures implemented since 2009, and still in force, amounts to USD 1.7 trillion or 8.7 per cent of world imports. This figure has grown steadily since 2009, both in value terms and as a percentage of world imports.

Even if trade restrictions remain widespread, the report also finds evidence of WTO members moving towards trade-facilitating policies across sectors during the review period, with 51 new trade-facilitating measures not related to COVID-19 implemented. These measures mainly included the elimination or reduction of import tariffs, the elimination of import taxes, the simplification of customs procedures and the reduction of export duties.

The trade coverage of non COVID-19 related import-facilitating measures was estimated at USD 739.4 billion, which is significantly higher than the USD 544.7 billion recorded in the previous report (from mid-May to mid-October 2019) and represents the second-highest figure since October 2012.

The report shows that by mid-May 2020 WTO members implemented 256 trade and trade-related measures explicitly linked to the COVID-19 pandemic, with export bans accounting for the totality of the pandemic-related export restrictions recorded. These COVID-19 related measures appeared to have come in two clearly identifiable waves. In the early stages of the pandemic, several of the measures introduced restricted the free flow of trade but as of mid-May 2020, 57 per cent of all measures were of a trade-facilitating nature. In early May, some members began to phase out export constraints, targeting products such as surgical masks, gloves, medicine and disinfectant. There is further evidence that a roll-back of other trade and trade-related measures taken in the early stages of the pandemic is also taking place. For instance, around 28 per cent of the COVID-19-specific trade-restrictive measures implemented by WTO members and observers had been repealed by mid-May.

Prepared against the backdrop of COVID-19, the report does not yet reflect the full impact of the pandemic on trade. According to WTO data published on 22 June, estimates for the second quarter of 2020 indicate a year-on-year drop in world trade of around 18 per cent.

Regarding general economic support measures, only 21 per cent of WTO members notified these actions in response to the Director-General's request for information. From the limited information received, and from the research undertaken by the WTO, the current review period confirmed that WTO members appeared to continue to implement such measures as part of their overall trade policy.

Separate from these longstanding policies, the review period saw an unprecedented number of emergency support measures introduced by members in response to the economic and social turmoil caused by the COVID-19 pandemic. Most of these measures appeared to be of a temporary nature. These include grants, monetary, fiscal and financial measures, measures targeting micro, small and medium-sized enterprises (MSMEs), loans, credit guarantees and stimulus packages. Several measures were one-off grants while others included disbursements staggered over a few months and up to three years. Some of these measures form part of larger emergency rescue programmes worth several trillion US dollars.

Trade-facilitating and trade-restrictive measures by WTO Members and Observers, mid-October 2019 to mid-May 2020
(By number)

COVID-19 trade and trade-related measures, by mid-May 2020
(By number)

Note: These figures are estimates, and represent the trade coverage of the measures (i.e. annual imports of the products concerned from economies affected by the measures) and not the cumulative impact of the trade measures. Liberalization associated with the 2015 Expansion of the WTO's Information Technology Agreement is not included in the figures. COVID-19 trade and trade-related measures are not included.
Source: WTO Secretariat. 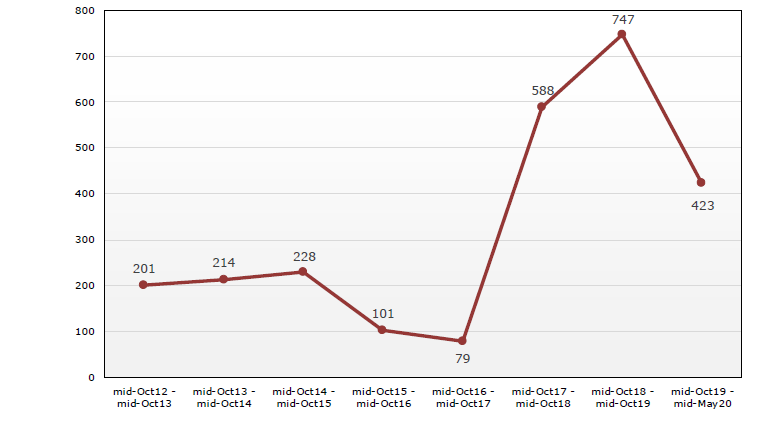 Note: These figures are estimates, and represent the trade coverage of the measures (i.e. annual imports of the products concerned from economies affected by the measures) introduced during each reporting period, and not the cumulative impact of the trade measures. COVID-19 trade and trade-related measures are not included.
Source: WTO Secretariat. 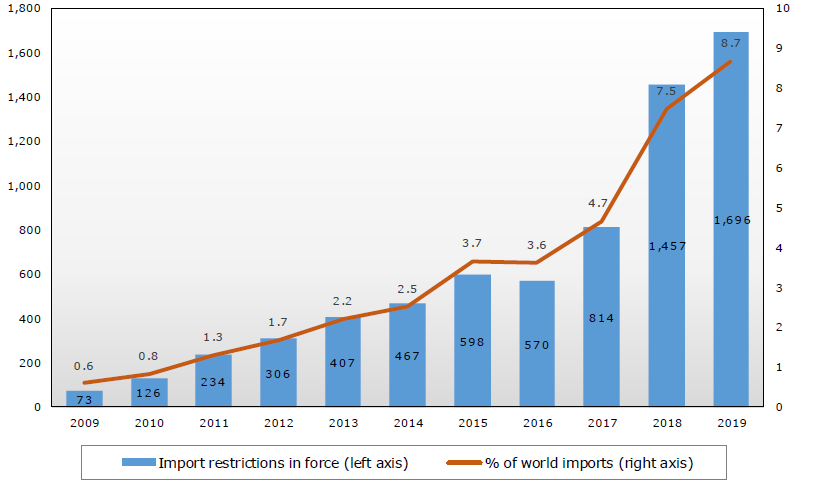 Note: The cumulative trade coverage estimated by the Secretariat is based on information available in the Trade Monitoring Database (TMDB) on import measures recorded since 2009 and considered to have a trade-restrictive effect. The estimates include import measures for which HS codes were available. The figures do not include trade remedy measures. COVID-19 trade and trade-related measures are not included. The import values were sourced from the UNSD Comtrade database.
Source: WTO Secretariat.