DG Okonjo-Iweala stressed that Liberia's accession journey has been an inspiring story of economic transformation and trade for peace. “Emerged from the civil war and the Ebola crisis, under the leadership of former President Ellen Johnson Sirleaf, the country has presented a model for WTO accessions. That is, with the right political will and leadership, a committed and motivated team, and friends and partners, a country — even as a small, capacity constrained and post-conflict LDC — can finalize and deliver an accession in a relatively short period.”

She added that Liberia's accession “has brought inspiration, energy, and the can-do attitude not only to the group of countries in the queue of joining the WTO, but also to the Organization itself, which is very much in need of transformation. No other country can appreciate peace, which was not only achieved but has been sustained since, more than the people of Liberia,” DG Okonjo-Iweala added. Her statement is available here.

Mawine G. Diggs stressed that “WTO accession marked a turning point in Liberia's history aimed at economic transformation for inclusive growth”. Highlighting the potential benefits of WTO membership, which included increased investment inflows, enhanced market access, and the application of a non-discriminatory regime, she recalled the vision of her Government to use WTO accession as a development tool after years of disruption caused by the civil war.

She noted that while five years of WTO membership have been positive for the country, the recent economic environment has been particularly challenging, and a lot remains to be done on the country's path to development and prosperity. Liberia is actively engaged in “Trade for Peace”, co-chairing the g7+ WTO Accessions Group, together with Timor-Leste. It will continue to extend its support to other fragile and conflict-affected states, including those in WTO accession, she said. Her statement is available here.

Pamela Coke-Hamilton highlighted the importance of working in partnership, providing acceding countries with the right tools to conclude this process, and putting in place the necessary regulatory frameworks. She stated: “Our vision is to make trade work for all people — from the cocoa bean farmers to the cassava exporters to the tourism service providers in Liberia. ITC works on the reforms needed to improve the lives of the ordinary citizens, and especially the vulnerable and marginalized communities, so that they too can live a better life.” Her statement is available here.

In a video message, Ambassador Joakim Reiter, former Chairperson of the Working Party on the Accession of Liberia, asked not to forget “the enormity of the achievement of Liberia”, which pursued its accession in the midst of the Ebola crisis. It showed “the immense courage, determination, resolve, as well as dignity, of the nation of Liberia”. Going forward, Ambassador Reiter called on the donor international community to show the same commitment and invest into the education and health care systems of the country to put it on a more successful development path.

Axel M. Addy, former Minister of Commerce and Industry and Chief negotiator on Liberia's accession to the WTO, declared that “how far Liberia has come and will go is also a testament to the collective efforts and will of local and international civil servants, all committed to a simple principle — trade is not only about delivering prosperity to the global few, but about lives. The Liberia story”, he added, “is a clear example of the value of the multilateral trading system, when trade can work for good and sustainable peace”. His statement is available here.

The study titled “Liberia: a retrospective on five years of WTO membership”, directed by Patrick Low, former WTO Chief Economist, emphasizes that while countries like Liberia may possess the political will to move their post accession process forward and implement the necessary reforms, they sometimes lack the capacity to do so. Therefore, they will require continued support in their post WTO accession.

As Mr Low stressed in the session, “WTO membership is a very substantive transformative step in terms of far-reaching economic reforms that are required before a country can accede.” The study also examines Liberia's experiences in the five years since joining the WTO, including its economic performance, the fulfilment of its obligations, and its participation in the work of the WTO. The study is available here. 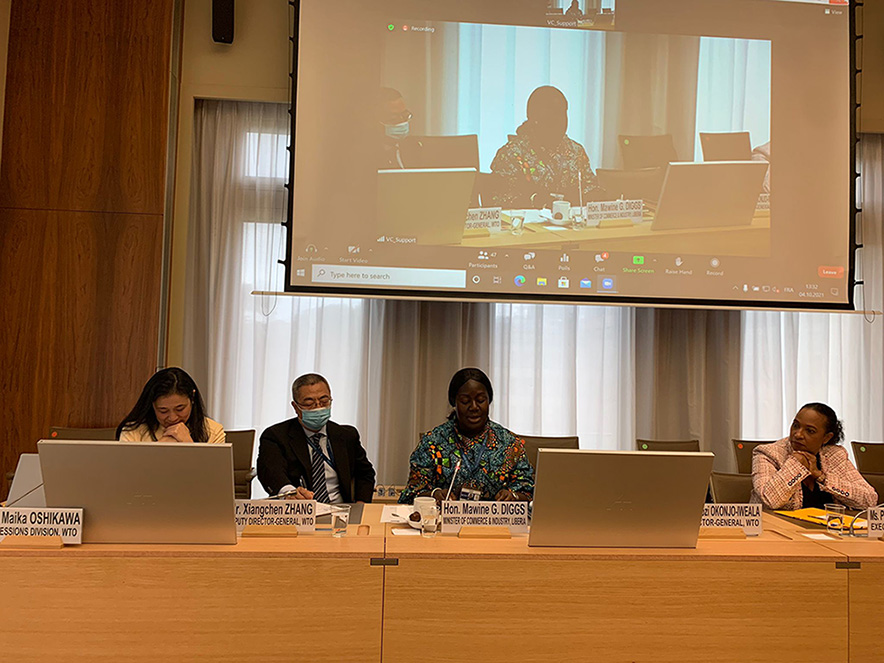