China acceded to the WTO on 11 December 2001, becoming its 143rd member, following 15 years of accession negotiations. The high-level forum to mark the anniversary, entitled “20 Years of China’s WTO Membership: Integration & Development”, was jointly opened by WTO Director-General Ngozi Okonjo-Iweala and Ambassador Chenggang Li, Permanent Representative of China to the WTO.

DG Okonjo-Iweala said that China's accession to the WTO in 2001 was a “pivotal event in the history of the multilateral trading system”. Over the past twenty years, she said, China has been “a textbook case for how global trade integration can drive growth and development — the country's economic rise has lifted millions out of poverty, not only within China but also in China's trading partners across the developing world.”

“The structural transformation triggered by accession-related reforms contributed to China's dynamic growth and modernization. For the WTO, welcoming China marked a significant step towards becoming a truly world organization. Over a fifth of the world population — 1.3 billion producers and consumers — gained full entry into the multilateral trading system. For other WTO members, China's accession meant the promise of more predictable and mutually beneficial trading relations with a large and fast-growing economy,” she added. Her full remarks are here.

She also noted that “several WTO members believe that China could contribute more to WTO reform efforts, in ongoing negotiations as well as on level playing field issues and restoring the dispute settlement function,” and welcomed the willingness from the highest levels of China's government to engage on these concerns.

Ambassador Li underlined the great transformation experienced by China over the past 20 years: “We have seen great changes. With its accession to the WTO, China substantively opened its market of goods and services. The average current tariff rates of manufactured goods have been lowered from 14.8% to the current 7.4% — 2.8% lower than the accession commitments. For trade in services, nearly 120 sectors have been opened up — 20 more than what was agreed upon accession. The continued opening up and reform fundamentally promoted China's development. Over the past 20 years, China grew from the sixth to the second largest economy of the world, with its GDP increasing 11-fold to almost USD 15 trillion. Furthermore, China has secured a complete victory in the battle against extreme poverty, eliminating it for the first time in a history of thousands of years.”

With the WTO facing in recent years both global and internal challenges, Ambassador Li said China will remain “a staunch supporter of the multilateral trading system” and expressed hope that the upcoming 12th Ministerial Conference “will deliver meaningful outcomes in some critical areas, such as fishery subsidies and the response to the COVID-19 pandemic.” Looking forward, he added that “in order to revitalize the WTO's key functions, while preserving its core values and principles, China supports the necessary reform and is ready to work together with other members for this purpose.”

The opening addresses were followed by a panel session with key players in China's accession process moderated by WTO Deputy Director-General Xiangchen Zhang.

Pascal Lamy, former WTO Director-General (2005-2013) and the European Union Trade Commissioner at the time of China's accession, said China's accession was a “defining moment” for the WTO and the multilateral trading system, which from the Chinese side required “political intelligence, technical knowledge and, of course, a good (accession) team.”

Mr Lamy said China deserves recognition for its  commitment and participation in the WTO over the last 20 years but noted that, going forward, it could do more: “Fulfilling your commitment in the WTO is also about whether you exercise your responsibilities, whether you are active enough to help the WTO moving forward, updating its rule book .... China, given its size now, has a large responsibility together with ‘big elephants’ such as the European Union and the United States.”

Former Deputy United States Trade Representative (USTR) Wendy Cutler underlined the historical importance of China's WTO accession and noted that more time will be needed to fully assess its impact: “When we look back on trade history, this is going to be one of the major milestones on trade. But I don't think the story is written in stone yet. I think it's still a fluid situation.”

Ms Cutler challenged the voices claiming that supporting China's accession was a mistake: “I think it was the right decision at the right time. That said, I don't feel like it's an anniversary that necessarily just lends itself to celebration. I think there is angst about what the future holds, not only for China's role in the WTO and US-China relations, but also for the WTO itself.” On the US-China trade relationship, she flagged some of the shortcomings raised by US companies when operating in the Chinese market and highlighted the need to find venues to improve that relationship, both bilaterally and at the WTO: “Issues such as the so-called non-market economy, industrial subsidies, the behaviour of state-owned enterprises and other related practices really need to be addressed.”

Yongtu Long, former Vice-minister and China's accession Chief Negotiator, saw encouraging signs of China wanting to address sensitive issues, such as environment, industrial subsidies and particularly state-owned enterprises. In his view, the recent speeches by Chinese President Xi Jinping at the G20 summit and at the recent International Import Expo in Shanghai signalled China's  willingness to engage in discussions: “If the WTO takes the lead in those areas for negotiation, I think China will follow the instructions from Xi to take an open attitude towards negotiations.”

Mr Long stressed the WTO should be the main channel for a new rule setting based on consensus despite the difficulties faced by the organization: “We must emphasize to the world that the WTO should be a strong and efficient organization. To be very frank that the WTO is in a very difficult time and there is a trend of fragmentation. So I think the most important thing is to build the confidence of the international community in the WTO because only through that confidence could the WTO undergo a substantive reform” in order to improve its rule-book and adapt to present and future challenges.

In closing, DDG Zhang underlined the impact of China's accession on the acceleration and consolidation of the trade globalisation process, despite some occasional setbacks. “The number of winners is greater than the number of losers and the turbulence is just temporary. We are all supporters of the multilateral trading system, so let us keep our fingers crossed for the progress of WTO reform and a greater contribution from China.”

Webcasting of the event is available here 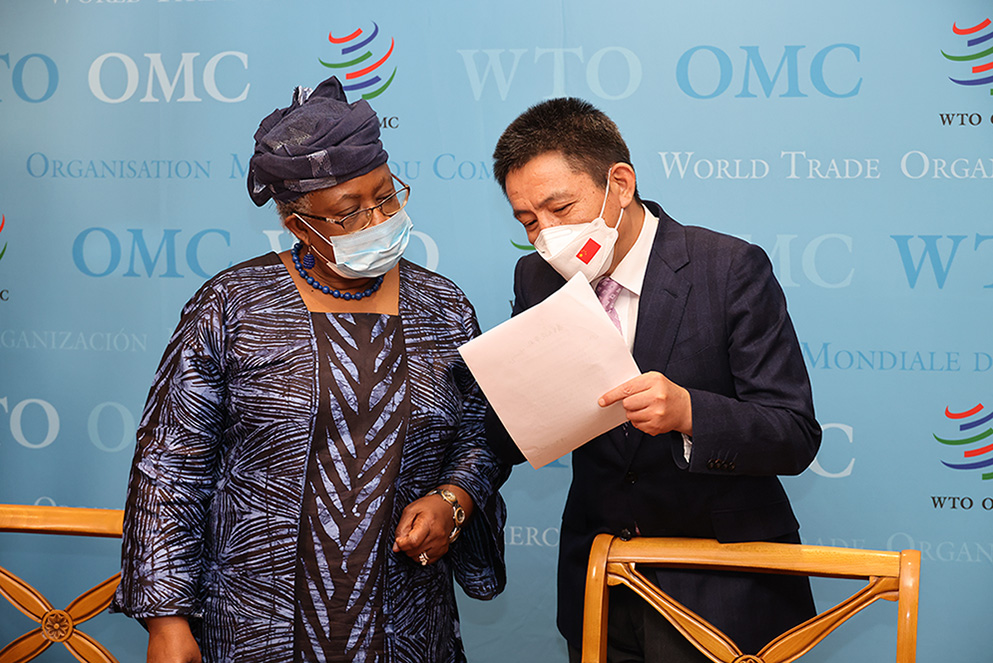