The theme selected for the 2021 opening plenary of the Geneva Trade Week, co-hosted by the WTO Trade for Peace Programme, reflects the growing interest in the nexus between trade and peace and the need to address it in an inclusive and collaborative manner. Since 2018, the Trade for Peace Programme has championed this interdisciplinary agenda, following the establishment of the g7+ WTO Accessions Group on the margins of the 11th WTO Ministerial Conference held in Buenos Aires in 2017.

“Trade and peace are completely intertwined in the history of the multilateral trading system … and yet they are not often mentioned in tandem. Each has its own community and constituency,” said DG Ojonko-Iweala. “Trade, poverty and peace remain intricately connected. The World Bank estimates that by 2030, up to two-thirds of the world's people in extreme poverty will be living in the 30 or so fragile and conflict-affected (FCA) countries. These are often the places least integrated into global trade.”

DG Okonjo-Iweala welcomed the WTO's partnership with the Graduate Institute, which hosts both trade and peacebuilding platforms, and its role in breaking down the silos separating the trade and peace communities. “We will need multidisciplinary thinking and inclusive approaches to use trade to create economic opportunities in FCA countries,” she said. Her full speech is available here.

In his keynote address, g7+ special envoy Jose Ramos Horta stressed that peace and stability in conflict-affected countries is a pre-condition for trade and hence development. Without peace, he said, these countries cannot reap the fruits of trade and investment. “Conflict-affected and other least-developed countries are rich in natural resources. However, their exploration has rarely resulted in job creation and hence economic development.”

The former Timor-Leste President noted that “international cooperation systems and policies should be reformed to become pro-peace and pro-stability for our countries” and called upon the WTO “to pursue reforms in its policies that can be conducive to the true interests of the world’s least-developed and conflict-affected countries.” His full speech is available here.

Recognising the fragile nature of peace, WTO Deputy Director-General Xiangchen Zhang emphasised the stabilising role of trade in many countries. He provided valuable insights into current topics of discussion at the WTO and how they relate to the maintenance of peace on the ground, including the relationship between negotiations on fishery subsidies and piracy. “We need to break the silos and work with each other. The world is changing, and we need to help the countries especially from the developing world to adapt to the new transformations,” he said.

Dorothy Ng’ambi Tembo, International Trade Centre Deputy Executive Director, signalled that coordination between partners is critical on trade for peace to avoid the duplication of efforts and to push the agenda forward. For inclusive engagement and sustainable intervention, countries must also have ownership of interventions and “ensure that they remain at the table”. She placed special emphasis on the integral role of small businesses in the success of the trade for peace vision.

Achim Wennmann, Director of Strategic Partnerships at the Graduate Institute and Senior Researcher at its Centre on Conflict, Development and Peacebuilding (CCDP), framed trade as a starting point to strengthen collaboration and disincentivise violence and conflict for parties in conflict. He outlined the implications of trade for peace in terms of the high levels of population growth expected in fragile and conflict-affected countries in the coming decades and posed a poignant question: “If we do not team up in order to enhance broad-based economic opportunity, then who will?”.

The discussion continued at a session on “Trade for Peace: Back to Basics” held on 29 September. Moderated by Axel M. Addy, host of the Trade for Peace Podcast and former Minister of Commerce and Industry and Chief Negotiator on WTO Accession of Liberia.

Ambassador Alan Wolff, former WTO DDG, delved into the evolution of the trade for peace initiative and its adoption within and beyond the WTO. He highlighted that “the African Continental Free Trade Area (AfCFTA) makes an explicit link between trade and peace, as did the 1948 Havana Charter”.

Helder Da Costa, g7+ General Secretary, shed light on the rising backdrop of poverty and conflict that led to the creation of the g7+ association in 2010 and the g7+ WTO Accessions Group in 2017. He noted that trade must be inclusive and suitable to the context of conflict-affected states and stressed that “the multilateral trading system is not multilateral if conflict-affected states are not taken into account”.

The Geneva Trade Platform, based within the Graduate Institute’s Centre for Economic Integration, aims to address current issues in international trade policymaking by bringing together diverse stakeholders, undertaking and facilitating access to research and briefings, championing innovative solutions and providing technical assistance and capacity-building support to trade actors.

Responding to these goals, the Geneva Trade Week is organised annually on the margins of the WTO Public Forum to complement and further the discussion around trade policy and the future of the multilateral trading system. 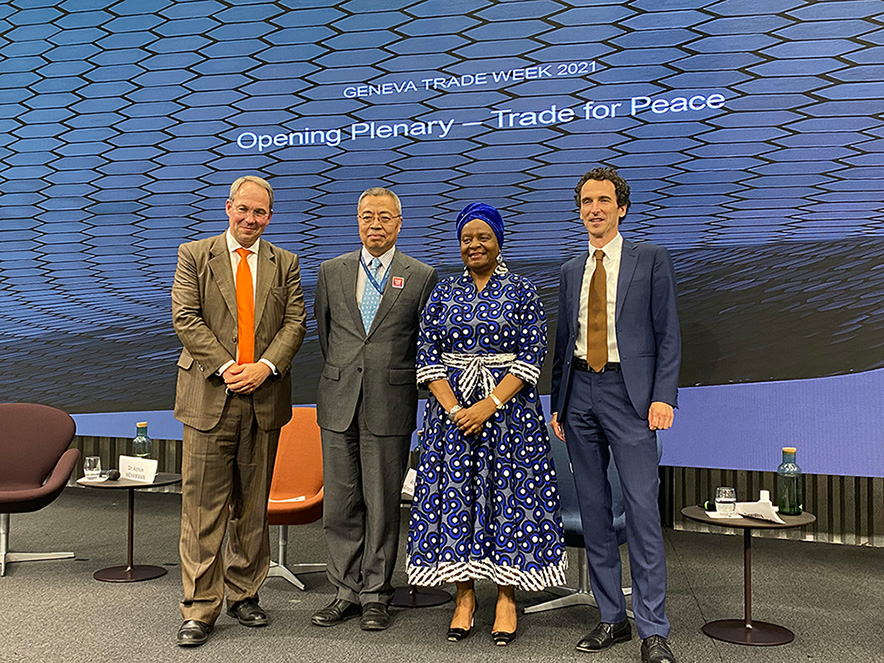