Speaking to a meeting of delegation heads from all WTO members, the Director-General said the decision to postpone MC12 was “as disappointing as it was necessary”. In addition to the potential health risks from the Omicron variant, travel restrictions introduced in response to its emergence had made it impossible for all ministers to participate on an equitable basis at the conference, which had been set to run from 30 November to 3 December in Geneva.

Just because the ministerial had been postponed did not mean that negotiations had stopped, the Director-General emphasised. She welcomed the ongoing meetings among ambassadors and experts to try to keep bridging gaps they had narrowed over the course of weeks of nearly round-the-clock preparatory negotiations and encouraged them to continue. The challenge for them now was to “recover from last week's unexpected setback to deliver results for the people we serve”.

DG Okonjo-Iweala said she had spoken to several ministers in recent days, and they all wanted negotiations in Geneva to continue — and to deliver results.

She pointed to a joint letter that the officers of MC12 — Conference Chair Timur Suleimenov, President's Envoy for International Trade of Kazakhstan, and Vice-Chairs Dan Tehan, Minister for Trade, Tourism and Investment of Australia; Jerome Xavier Walcott, Minister for Foreign Affairs and Foreign Trade of Barbados; and Harriet Ntabazi, Minister of State for Trade of Uganda — had sent to ministers from all WTO members, asking them to empower Geneva representatives to resolve outstanding differences so that ministers can reconvene in March to adopt agreements. That letter called for prioritizing outcomes on pandemic response, including a “sensible solution” on the proposed intellectual property waiver, given the global health situation, as well as on fisheries subsidies, where recent convergence had put a deal in the long-running negotiations within reach.

“If we were ready to make progress this week, we can finish pandemic response and fisheries subsidies by the end of February, and know where we are on agriculture,” the Director-General said.

“The pandemic is raging — people are dying globally in numbers similar to April 2020. The public expects a response from WTO members,” she added. “The new Omicron variant has reminded us once again of the urgency of achieving equitable access to vaccines in every country in the world.”

“It underscores how important it is for us to converge on the WTO's contribution to achieving this goal, including the TRIPS dimension. I strongly believe that a comprehensive response to the pandemic must include intellectual property,” she said, urging all sides to come together to find a compromise.

Noting that it was not clear whether the epidemiological situation would permit ministers to gather in March, the Director-General said Geneva representatives should seek to prepare clean texts, or at most texts with one outstanding issue to be resolved, for ministers. This would permit them to finalize or bless an outcome even if they have to do so remotely.

She urged delegations to advance where possible in the days remaining before the WTO's winter break and to return early in January with “guidance and instructions for getting us to the finish line”. 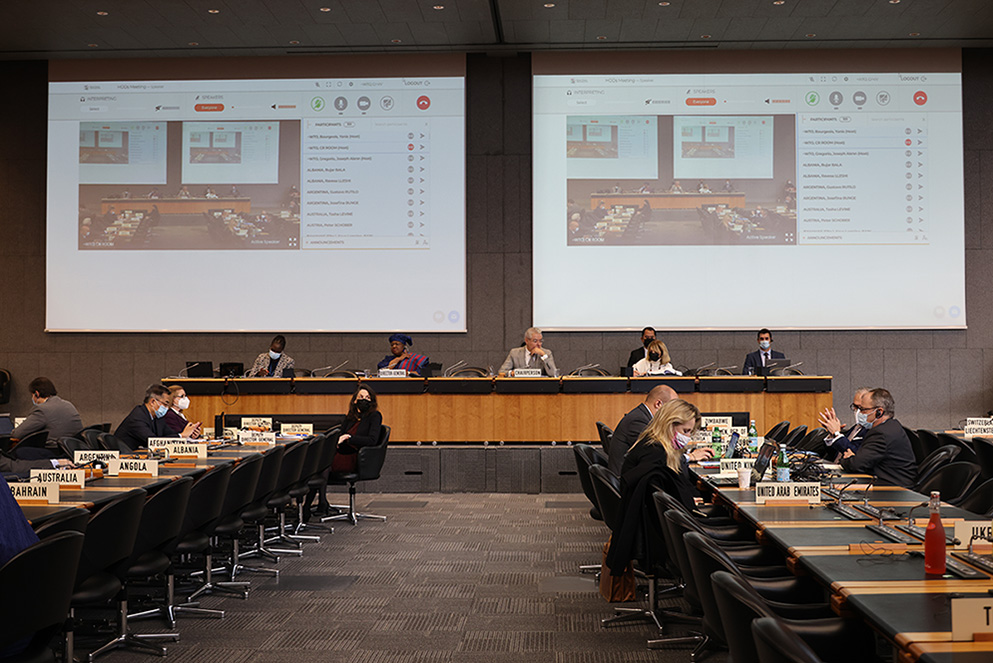