TNC and Heads of Delegation meeting

Summing up members' interventions at the end of the day, WTO Director-General Ngozi Okonjo-Iweala said what she had heard matched what she had been told in her own consultations: “Views are coalescing around the most feasible priorities for delivery between now and MC12 — although of course there are gaps on how we get there and on the content of prospective results.”

She said three concrete deliverables stood out: an agreement to curb harmful fisheries subsidies; outcomes on agriculture, with a focus on food security; and a framework that would better equip the WTO to support efforts against the COVID-19 pandemic and future health crises.

Looking to the weeks and months ahead, the Director-General expressed hope that by July members would be able to finalize an agreement on fisheries subsidies and achieve clarity about what can be delivered by MC12, scheduled to run from 30 November to 3 December in Geneva.

On fisheries subsidies, she urged members to exercise the necessary flexibility to overcome the remaining hurdles. With ministerial involvement likely required to finalize an agreement in July, she called on delegations to work with the chair of the negotiations, Ambassador Santiago Wills of Colombia, to prepare a draft negotiating text with a minimal number of outstanding issues for ministers to resolve. “We are almost there, we can see the light at the end of the tunnel,” she said, stressing she stood ready to help members and the chair translate increased flexibility into an agreement.

Noting that for many members, meaningful outcomes on agriculture were necessary to make MC12 a success, DG Okonjo-Iweala said that the pandemic, and rising hunger around the world, made a strong case for a WTO “food security package”. Elements for a prospective package included public stockholding, the proposed exemption from export restrictions of World Food Programme humanitarian purchases, domestic support and transparency, with some delegations also raising cotton and the special safeguard mechanism.

The Director-General welcomed the view expressed by many delegations that MC12 can deliver concrete responses on trade and health. The WTO's spotlight on export restrictions and the need to increase vaccine production volumes was gaining attention and engagement from leaders, she said.

Reporting on a 14 April event where vaccine manufacturers, international organizations, civil society and members looked at how the WTO could contribute to efforts to combat the global scarcity of COVID-19 vaccines, she said it was clear that underused manufacturing capacity existed in several developing countries.

DG Okonjo-Iweala praised members' support to India amid the upsurge in COVID-19 cases there, which followed India's own exports of a large number of vaccines. “That is what the WTO membership should be about — working together, supporting each other,” she said. She asked members to bring the same sense of common purpose to bear on engaging in text-based negotiations on the TRIPS waiver proposal aimed at finding a pragmatic compromise that works for all.

With regard to dispute settlement, where many members called for resolution to the impasse over the Appellate Body, the Director-General expressed hope that by MC12 members “can reach a shared understanding on the types of reforms needed”.

The General Council chair, Ambassador Dacio Castillo of Honduras, is consulting on proposals about issues specific to least-developed countries such as the G-90 proposals on special and differential treatment as well as on small economies and areas such as the e-commerce Work Programme, she said.

She noted that groups of members had signalled a desire to move ahead in areas such as services domestic regulation, e-commerce, investment facilitation, women's economic empowerment, micro, small, and medium-sized enterprises as well as issues related to trade and climate change.

For issues not in a position to be concluded this year, the Director-General said members had called for post-MC12 work programmes on multilateral issues relating to agriculture, services, and special and differential treatment as well as in joint statement initiatives in areas including plastics pollution and environmental sustainability.

DG Okonjo-Iweala said that in the coming days, she would intensify her own outreach with heads of delegation, organizing meetings “in various configurations large and small” to support the chairs of negotiating groups in their efforts to broker compromise among members. She reiterated her commitment to ensuring adequate representation and transparency in these meetings. “Nothing will be done behind closed doors that people don't know about,” she emphasised. She indicated that she would work closely with the General Council chair and the chairs of the negotiating bodies as well as MC12 chair Kazakhstan to conduct these meetings.

Emphasising the tight timeframe for members to resolve their outstanding differences, the Director-General said the “path to July” would involve a large number of intensive meetings aimed at narrowing gaps. “Week in, week out, this is what we will do now.” 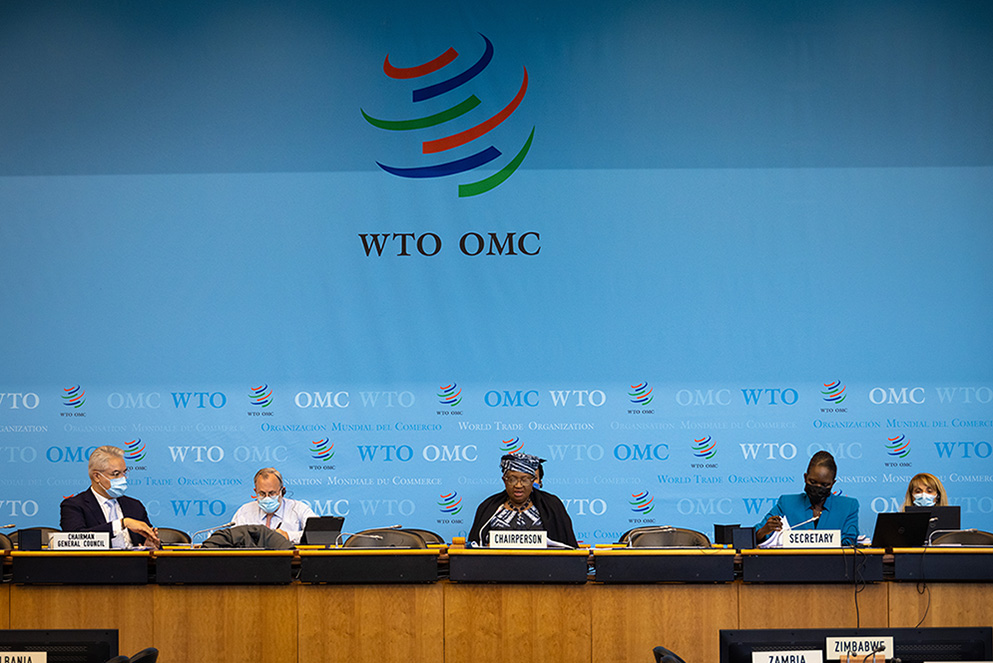