In her remarks, DG Okonjo-Iweala urged members to identify “two, three or four areas that we should focus our attention on from now through MC12”, arguing that this would enhance their prospects for delivering concrete results. “Either we continue to bring everything to the table, or we see what we can realistically achieve. To the extent we are on the same page, with a shared game plan, the likelier we are to get to meaningful outcomes.”

Referring to the 15 July meeting where ministers instructed members to conclude a fisheries subsidies agreement as soon as possible before MC12, which will start at the end of November, the Director-General acknowledged that “a lot of gaps remain to be bridged” on the draft negotiating text. She asked all delegations to engage actively in the upcoming text-based negotiations and to contribute to finding the necessary compromises. “The time to read statements is over,” she said, calling on them to operate “with the E.N.D. in mind — Engage, Negotiate and Deliver,” and show that they can deliver multilateral agreements.

On the WTO system's response to COVID-19 and future pandemics, DG Okonjo-Iweala reported to members on the 21 July event where the WTO and the World Health Organization brought together representatives from vaccine manufacturers, governments, public health advocacy groups and development finance institutions to look at challenges facing vaccine production, investment and access. The event allowed business and members to hear each other's views, including on intellectual property. Discussions highlighted the increase in vaccine production, including new investment in production capacity in developing countries, but also the stark and enduring inequities in vaccine access: only 1.5% of people in Africa are vaccinated and a mere 0.3% of people in low-income countries compared to over 42% in developed countries.

The Director-General welcomed General Council Chair Ambassador Dacio Castillo's (Honduras) appointment of Ambassador David Walker (New Zealand) as a facilitator for members' efforts to bring together their various pandemic-related proposals into a potential agreement. She said that a WTO framework covering issues such as supply chain openness and monitoring, increased investment in production and intellectual property would be a valuable complement to governments' ongoing attempts to put in place financing and governance arrangements to be better prepared for future pandemics. “This is an area where we need to have an outcome not only for now but for the future,” she said. “The world, including business, governments and the international community, civil society organizations — they expect us to deliver.”

On the negotiations in the Trade-Related Aspects of Intellectual Property Rights (TRIPS) Council on the proposed waiver of standard intellectual property protections for COVID-related vaccines, therapeutics and diagnostics, she urged members to “move with a sense of urgency — people's lives are at stake.” She expressed hope that delegations would look at the continuum from additional flexibilities to compulsory licences, voluntary licences, waivers and other intellectual property options and make enough progress by the end of July to provide a sense of what might be achievable. “The outside world expects us to come up with a practical and forward-looking solution to these issues,” she told them.

With regard to special and differential treatment, DG Okonjo-Iweala emphasised it is a “central tenet” of the WTO agreements and urged members to work with the Chair, Ambassador Kadra Ahmed Hassan (Djibouti), and the G-90 to find ways forward both on specific proposals and in the broader systemic debates on the issue.

On agriculture, while acknowledging the substantial differences among members' views, the Director-General said that the desire for an MC12 outcome was widely shared and asked them to keep engaging with Ambassador Gloria Abraham Peralta (Costa Rica) to develop a credible package.

She also urged delegations to find a common understanding on the reforms they want to see in the dispute settlement system so that a post-MC12 work programme can advance in that direction.

The Chair of the Negotiating Group on Rules, Ambassador Santiago Wills (Colombia), outlined his plans for a two-stage negotiating process for the “final lap” negotiations on fisheries subsidies. The first stage would focus on the main differences among members to collectively improve the text, followed by line-by-line, text-based negotiations. A detailed work plan would be sent to all delegations next week. He also said members should aim to arrive at a complete agreement text no later than early November.  “A positive conclusion of the fisheries subsidies negotiations is within reach,” he emphasised.

The Director-General reminded members that despite the continuing differences of opinion, their hard work had advanced the fisheries subsidies more than ever before, placed the WTO and trade firmly in the middle of the response to the COVID-19 pandemic and advanced discussions on micro, small and medium-sized enterprises, gender, e-commerce, trade and environment issues, services domestic regulation, and investment facilitation.

“Together, we can deliver meaningful, quality outcomes for the people we serve," she said. "It is clear that this noble objective is one that everyone shares.” 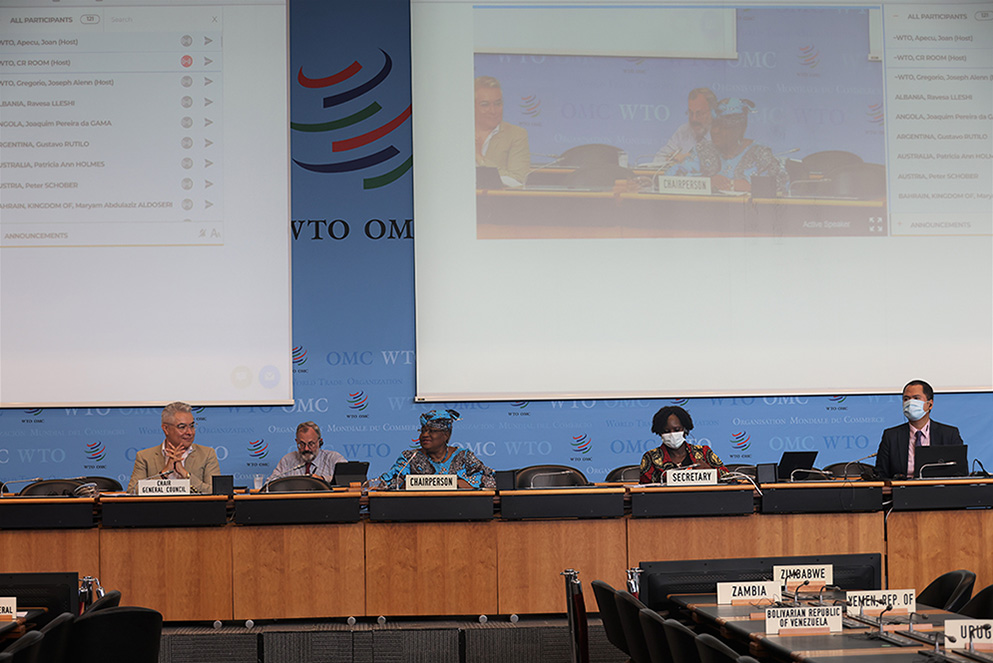