DDG Zhang went to Ashgabat as a follow-up to the exchanges earlier this year between the President of Turkmenistan Serdar Berdimuhamedov and WTO Director-General Ngozi Okonjo-Iweala. The main purpose of the visit was to discuss the Government's vision for its WTO accession process, launch the work programme for preparation of the initial documentation, and attend a roundtable on technical assistance with development partners.

In a meeting with Mr Muhammetguly Muhammedov, Deputy Chairman of the Cabinet of Ministers for Finance and Economy, DDG Zhang praised the political decision of the Government of Turkmenistan to initiate the accession process.

Mr Muhammedov drew attention to the work done by the Government Commission on WTO Accession since its establishment in 2013. He indicated that the decision to join the WTO had been taken at the highest level of the Government in line with the foreign trade strategy that has been set out for the period up to 2030. The two sides exchanged views on factors that would have an implication on the timelines of Turkmenistan's accession.

In his talks with Mr Rashid Meredov, Deputy Chairman of the Cabinet of Ministers and Minister for Foreign Affairs, DDG Zhang congratulated Turkmenistan on the establishment of the Working Party on the Accession of Turkmenistan to the WTO on 23 February 2022.

DDG Zhang encouraged Turkmenistan to avail itself of technical assistance and capacity building programmes of different international organizations and bilateral partners in the course of WTO accession. Mr Meredov highlighted the importance of making domestic institutional arrangements for carrying out the negotiations, exploring the implications of joining the WTO, and bringing the national legislation into compliance with WTO rules.

DDG Zhang also met with Mr Batyr Atdayev, newly appointed Deputy Chairman of the Cabinet of Ministers overseeing the Trade and Textile Industry, who introduced the ongoing work in Turkmenistan to review its legislation in line with WTO principles and requirements. Mr Atdayev expressed his concerns about the possible impact of WTO accession on the country's agriculture sector. DDG Zhang encouraged Turkmenistan to be resilient and practical in its negotiations.

During DDG Zhang's visit, the United Nations Resident Office in Turkmenistan, the Asian Development Bank, the Government of Turkmenistan and the WTO jointly launched the Work Programme for the Preparation of the Memorandum on the Foreign Trade Regime of Turkmenistan. This memorandum is the first document in the accession process to help WTO members understand the trade regime and policies of the acceding country.

Mr Vepa Hajiyev, Deputy Minister for Foreign Affairs and Chair of the Government Commission on WTO Accession, and representatives from relevant ministries attended the launch. DDG Zhang encouraged Turkmenistan to use WTO accession as a tool to support its economic reform agenda and enhance its role in the region as a unique transit hub connecting Asia and Europe. Read his full remarks here.

The launch was followed by a roundtable on technical assistance with development partners. Representatives from different international organizations and national foreign aid agencies indicated their readiness to provide further assistance to Turkmenistan on its economic reforms and WTO accession. They also expressed their hope that the WTO can play a coordinating role in the provision of this assistance. The roundtable was followed by technical sessions conducted by a WTO Secretariat expert, with the participation of government officials from various government agencies.

Turkmenistan is the last former Soviet republic to initiate WTO accession negotiations, being granted observer status by members in July 2020. Since then, the WTO Secretariat has worked closely with Turkmenistan to establish a roadmap for accession and conduct training activities on accession documentation, in partnership with the Asian Development Bank. 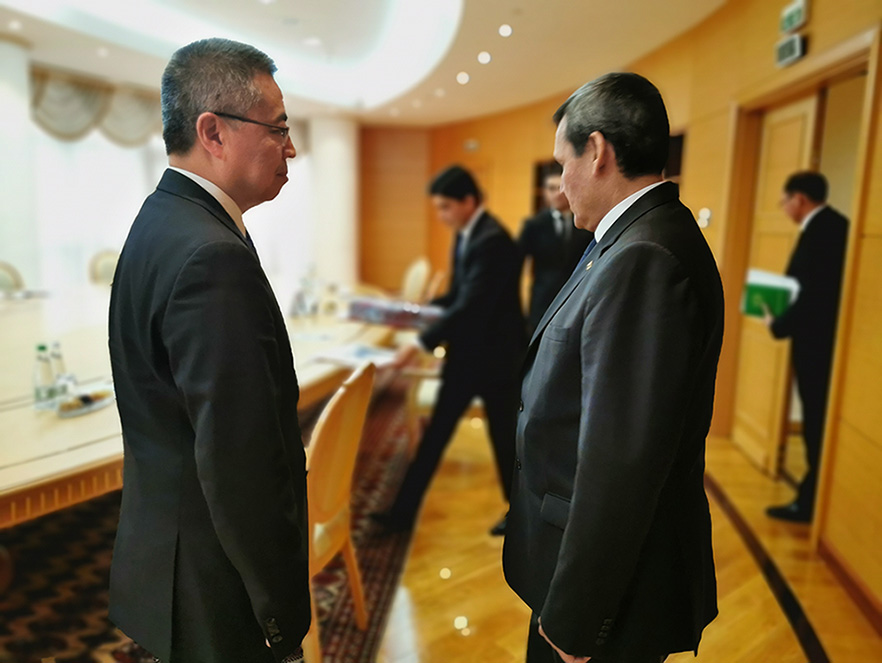