A high-level delegation, led by Mr Badriddin Abidov, Deputy Minister of Investments and Foreign Trade and Chief Negotiator for WTO Accession, took part in-person in the Working Party meeting at the WTO. The meeting was also attended by the Uzbek Ambassador Mr Ulugbek Lapasov, several deputy ministers and many senior government officials and experts from a range of ministries and government agencies. A large number of officials also connected from Tashkent.

In a recorded statement, Mr Sardor Umurzakov, Deputy Prime Minister and Minister of Investments and Foreign Trade, stressed that Uzbekistan intends to continue “its irreversible development along the path of reforms”. He drew attention to the adoption earlier this year of a new development strategy covering the period 2022-2026, in which one of the main priorities is WTO accession.

“For the last several years, we have undertaken concrete measures to accelerate our accession process. After a 15-year break, despite all the challenges of the pandemic, we successfully conducted the 4th Working Party meeting in 2020,” said Deputy Prime Minister Umurzakov. He indicated that accession negotiators “have a very clear instruction from the Uzbek government to make significant progress along the path of our accession to the WTO.” His full statement is available here.

The chair of the Working Party, Ambassador Taeho Lee of the Republic of Korea, called on members to build on the momentum of the successful WTO 12th Ministerial Conference (MC12). “After two years of the pandemic which has disrupted the global economy, it is inspiring to see that nations can come together and achieve outcomes through negotiation and cooperation in good faith, which lies at the heart of the WTO, including on accessions,” he said.

Ambassador Lee recalled that since the 10th Ministerial Conference in Nairobi, where Afghanistan and Liberia were welcomed as new members of the organization, there have been no new accessions. However, he underlined the significance of ministers underscoring the importance of accessions and their commitment to facilitate the conclusion of ongoing accessions in the MC12 outcome document. “I hope that this commitment will be translated into concrete actions in this accession,” he added.

In remarks to the Working Party, WTO Deputy Director-General Xiangchen Zhang referred to his recent visits to Tashkent. In October 2021, he met with Deputy Prime Minister Sardor Umurzakov and the National Steering Committee on WTO Accession. In March 2022, he spoke at the Tashkent International Investment Forum in the same panel as President Shavkat Mirziyoyev, who promised Uzbekistan would intensify efforts this year and beyond in its accession negotiations.

He reiterated the WTO Secretariat's support to Uzbekistan for the rest of its accession journey, which can be long and complex. “I trust that WTO members and other partners will do their part in supporting Uzbekistan's reforms-driven accession,” he said.

The Working Party reviewed the state of play in the bilateral market access negotiations. Uzbekistan reported that it had held bilateral engagements with 35 members to date and a number of bilateral meetings are taking place on the margins of the Working Party meeting.

On the multilateral front, the Working Party completed reviewing all sections of the Factual Summary of Points Raised prepared by the WTO Secretariat, along with supporting documents including a questionnaire on state trading and a draft subsidies notification. The Working Party also had the first opportunity to review Uzbekistan's Agricultural Supporting Tables for the reference period of 2016-2018.

On the legislative front — central to any accession process — the Working Party reviewed Uzbekistan's revised Legislative Action Plan as well as 39 pieces of legislation which have been made available to members.

In closing a “very useful and productive meeting”, Ambassador Lee thanked members and Uzbekistan for their constructive engagement.

“I have noted Uzbekistan's strong desire to accelerate accession negotiations, both on the bilateral and multilateral fronts. I have also witnessed members' willingness to support Tashkent's goal which is reflected in their active engagement and provision of technical assistance in some cases,” he said.

On the bilateral front, the Working Party chair invited Uzbekistan to share its revised market access offers on goods together with currently applied tariff rates with all interested members.

On the multilateral front, members were invited to provide questions and comments in writing by 20 July. Tashkent was requested to provide a revised questionnaire on state trading, updated Agriculture Supporting Tables for the reference period of 2019-2021, as well as its replies to members' questions. These inputs would provide a basis for upgrading the multilateral document.

Concerning legislation, Uzbekistan was invited to revise its Legislative Action Plan and to provide copies of WTO-related legislation and enforcement mechanisms, including in draft form, especially in the areas requested by members.

Regarding the next meeting of the Working Party, the chair left the date open at this stage pending the availability of further inputs as well as progress in the bilateral market access negotiations. 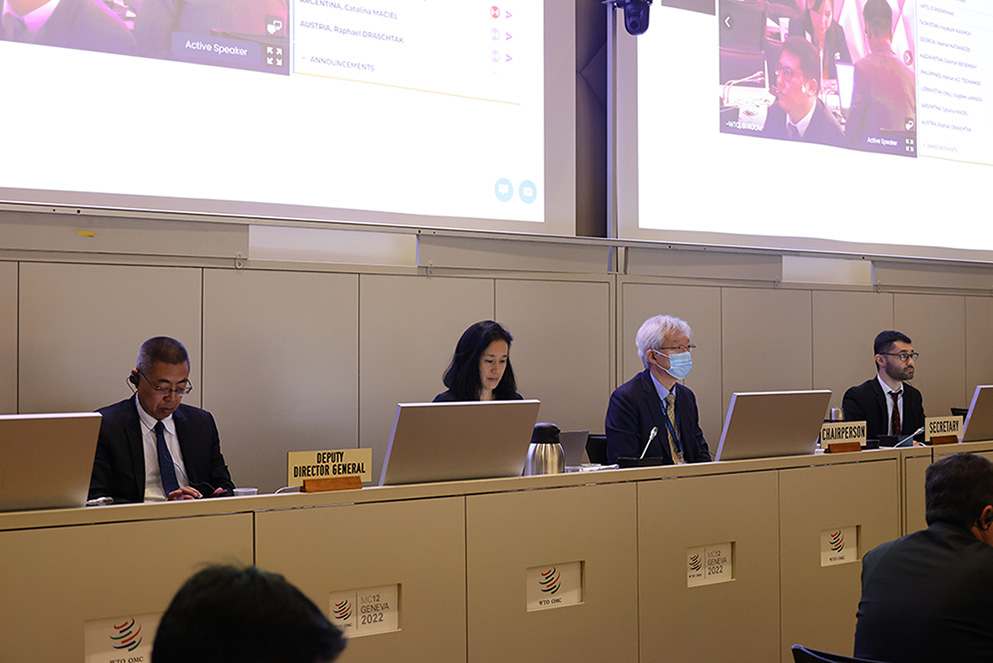