“The goal of ensuring that trade contributes as much as possible to improving people's lives and livelihoods is what lies behind my constant call for the WTO to deliver results,” DG Okonjo-Iweala declared. “As we begin to lay the foundations for a more responsive WTO and successful 13th Ministerial Conference (MC13), we should remember that we do not need to wait for a Ministerial Conference to deliver results.”

The Director-General said that until MC13 takes place a great deal of work needs to be done. “This means facilitating negotiations and helping you build convergence on a focused, solutions-oriented agenda” that makes the WTO “an institution that people can rely on to deliver during difficult times such as these,” she said.

DG Okonjo-Iweala noted that the success of last week's Public Forum is proof of how dynamic exchanges and new ideas can help inform and stimulate WTO members' work in Geneva. Over 1,500 people from across the world attended in person the Public Forum to discuss how trade and the WTO can support inclusive recovery after the series of crises over the past two and a half years.

Over 140 sessions brought together some 600 speakers from diverse fields to facilitate the discussions. “Making the WTO more responsive to the needs of people starts from all of us listening to their views and concerns. That is why engaging the public in our work is so important,” the DG said.

Speaking about the many areas of substantive work ahead of MC13, the Director-General urged members to seriously engage on reforming agriculture trade, a sentiment shared by numerous civil society groups. She recognized the efforts made over the past 22 years since the reform mandate took effect, including good ideas and some valuable steps such as the Nairobi decision on export competition, but noted that if serious progress is to be made, members need “a fresh approach”.

“This work could not be more urgent as people struggle with high food prices, and global agricultural production is confronted with climate risks, water scarcity and supply chain issues for fertilizer, seeds and other key inputs,” she said. A members' retreat to address the agriculture agenda will take place on 24 October, with a view to finding out what is really happening on the ground and factoring these developments into the way members approach agriculture negotiations in the future.

The Director-General also referred to the MC12 Ministerial Declaration on Emergency Response to Food Insecurity and encouraged members to implement these provisions, drawing particular attention to the needs of least-developed countries (LDCs) and net food-importing developing countries (NFIDCs). She congratulated members who are implementing trade facilitation measures and keeping export prohibitions and restrictions down but warned of a recent trend of increasing new restrictions on food, fertilizers and other inputs.

“I would like to strongly request members to please look at this because these export restrictions and prohibitions do have an impact on international prices for food,” she noted. “I'd like to see us reverse this trend and be able to report that we are moving back in the right direction.”

With regard to special and differential treatment (S&DT), she recalled that ministers provided clear direction on improving the application of this principle, as enshrined in Paragraph 2 of the MC12 outcome document. “I recognize the different views put forward by members on S&DT and development issues in general. But, as MC12 showed us, with sufficient political will and flexibility we can find creative solutions for the common good.”

Regarding fisheries subsidies — following the agreement reached at MC12 — another members' retreat is scheduled for 10 October. “I think this retreat will be an excellent opportunity to really think outside the box on how best to tackle the outstanding but also difficult issues. So, I again want to urge all members to come with an open mind to engage in a true brainstorming mode.”

DG Okonjo-Iweala stressed the need to successfully conclude fisheries negotiations. She called on members to deposit their instruments of acceptance for the fisheries subsidies agreement, so that its disciplines enter into force as soon as possible. “If we fail to do so, the new agreement will sunset four years after its entry into force — an outcome that would be devastating for the oceans, for the millions of people who depend on marine fisheries, and for our credibility here at the WTO.”

Members were also encouraged to intensify work and reach a mutually acceptable outcome on Paragraph 8 of the TRIPS Decision from MC12, namely whether to extend the compromise reached for COVID-19 vaccines to cover therapeutics and diagnostics. With the 17 December deadline fast approaching, DG Okonjo-Iweala urged delegations to constructively engage in the discussions in the TRIPS Council under the leadership of the chair, Ambassador Lansana Gberie of Sierra Leone, who briefly reported on the recent discussions to find a solution before 17 December.

On WTO reform, the DG noted this subject is most frequently raised by stakeholders she has met since June as well as leaders and ministers, including at the recent meetings of G7 and G20 trade ministers. Acknowledging that the coverage of WTO reform is quite large, she argued that  attempting to act on all fronts at once would lead the process to gridlock. “This is why a hybrid approach bottom-up for the deliberative function in WTO bodies and top-down in identifying one or two cross cutting issues that we can deliver, possibly at MC13, would be a very good approach.”

Of particular urgency is the reform of the dispute settlement mechanism, as expressed both by the business community and WTO members. “We must therefore act with a sense of urgency in line with Paragraph 4 of the MC12 outcome document whilst giving full space to the process of consultation that is now underway led by the United States.”

The chair of the General Council, Ambassador Didier Chambovey of Switzerland, said he will organize an informal conversation on this issue amongst members under the auspices of the General Council at the end of October or at the beginning of November. The aim is to develop a programme and structure for this event that will promote an “interactive and serene dialogue”.

The chair proposed to allow some time to see how current discussions between members unfold and then take stock. Ambassador Chambovey and the chair of the Dispute Settlement Body, Ambassador Athaliah Lesiba Molokomme of Botswana, will then coordinate with delegations so that they are able to conduct discussions with a view to having a fully and well-functioning dispute settlement system accessible to all members by 2024.

While members implement MC12 outcomes and move ahead with WTO reform, the Director General also emphasized the need to discuss the future of trade — “which is services, digital, and green.”

Last month, she attended the Global Center on Adaptation's Summit on Africa where participants looked at commitments and action to support Africa's climate adaptation needs and a just low-carbon transition. She will also attend COP-27 in Sharm el-Sheikh, Egypt (6-18 November) where the WTO will launch a flagship report on trade and climate. “We need to demonstrate what climate change may mean for trade, but also what we can do to help us reach the net-zero target by 2050.”

On MC13, Ambassador Chambovey informed members of his intention to immediately start the consultative process on the date and venue. He reminded delegations that “in order to allow time for all required logistical preparation for MC13, the General Council should take a decision in the coming weeks, preferably at the end of this month.”

Cameroon and the United Arab Emirates (UAE) are the two potential MC13 hosts. Ambassador Chambovey gave the floor to Luc Magloire Mbarga Atangana, Minister of Trade of Cameroon,  and Dr. Thani bin Ahmed Al Zeyoudi, Minister of State for Foreign Trade of the UAE, who addressed the membership to make the case about the suitability of their respective candidacies.

Undersecretary for Foreign Trade of Mexico, Luz María de la Mora, also made a statement in support of the WTO and the multilateral trading system. Ms De la Mora leads on 5 and 7 October the Mexican delegation at the seventh Trade Policy Review of Mexico. 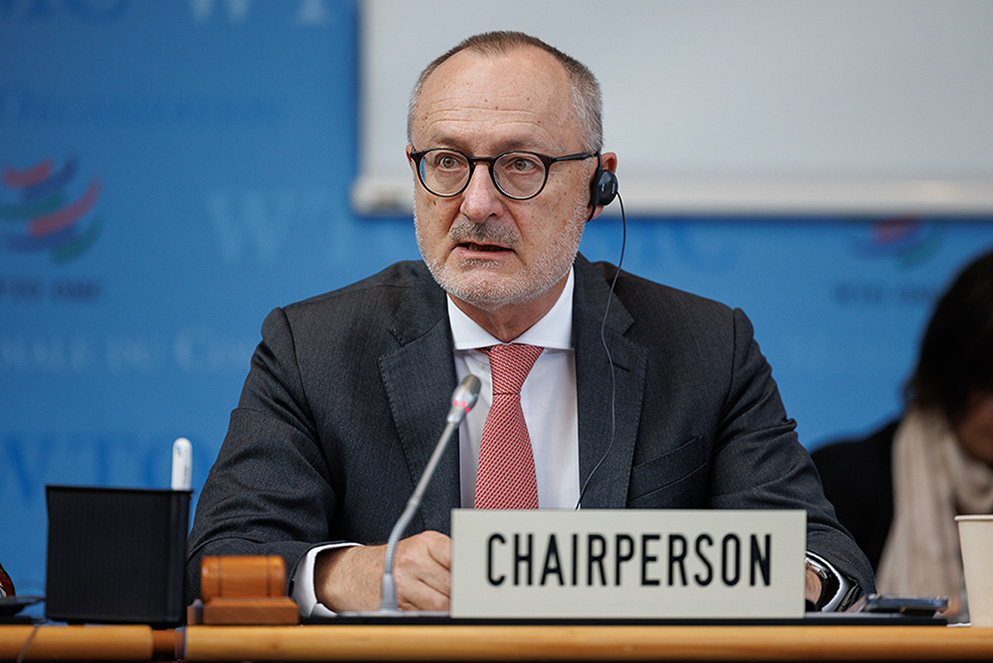