“What the world needs right now is a responsive WTO, one that helps us meet the many challenges of our time and delivers on the aspirations of the people we serve,” DG Okonjo-Iweala said in her role as Chair of the Trade Negotiations Committee (TNC). “Ministers at MC12 can take an important step in this direction. That means we in Geneva need to properly lay the foundation for this to happen when ministers arrive in a few weeks.”

Noting that the WTO has not held a Ministerial Conference since late 2017, she told members it was “only right that we do the preparatory work needed to make a success of an MC12 that has been in the making for nearly five years whilst we also contemplate what we need to do for life after MC12 and moving towards MC13.”

“This is our responsibility and I hope we can all act accordingly.”

The DG told members that she sensed a willingness to try to work towards some deliverables at MC12, among them the importance of addressing the food crisis, the need to reach a credible WTO response to the COVID-19 pandemic, successfully concluding the negotiations on fisheries subsidies, making some progress on agriculture, and addressing reform of the WTO.

Building on the work done so far in the services negotiations, working towards a mutually acceptable path forward on special and differential treatment and reaching a shared understanding on how to address negotiating areas after MC12 are other deliverables sought by members.

“I recognize that delegations are aware of the limited time left and the need to manage expectations,” she said. “I likewise acknowledge the desire to work now on all pillars and work towards deliverables in a realistic fashion. Let us see what we can do and what we can deliver.”

In a statement regarding his consultations with delegations on preparations for MC12, General Council Chair Didier Chambovey (Switzerland) stressed to members that it was “not only our shared objective but more importantly our shared prerogative to make this Ministerial Conference meaningful.”

“To this end, let us all intensify our efforts to prepare and finalize as much as we can in the weeks ahead before our ministers arrive,” Ambassador Chambovey declared.

The General Council Chair noted that his consultations have addressed possible elements for an outcome document at MC12. Many delegations acknowledged the considerable work undertaken on the draft outcome document circulated last year and stressed the importance of preserving these efforts to the extent possible, he noted.

Ambassador Chambovey also noted that delegations shared different views about the nature or mode of the conference and that several delegations stressed the need to have clarity on this as soon as possible. In this regard, Ambassador Chambovey said that he and the Director-General believe it would be useful to convene a “stocktaking” meeting at the beginning of June in order to structure the agenda of MC12 and to guide the engagement of ministers.

Ambassador Dacio Castillo (Honduras), in his capacity as the General Council Chair's Facilitator, reported to members on his consultations regarding the WTO's response to the pandemic. Ambassador Castillo urged delegations to make effort to streamline texts and merge them wherever possible so members can start negotiating on a single text from 16 May. He noted that discussions within the TRIPS Council on the proposed intellectual property waiver will also intensify during this period and that he will coordinate with the TRIPS Council Chair to ensure both processes are manageable for delegations. 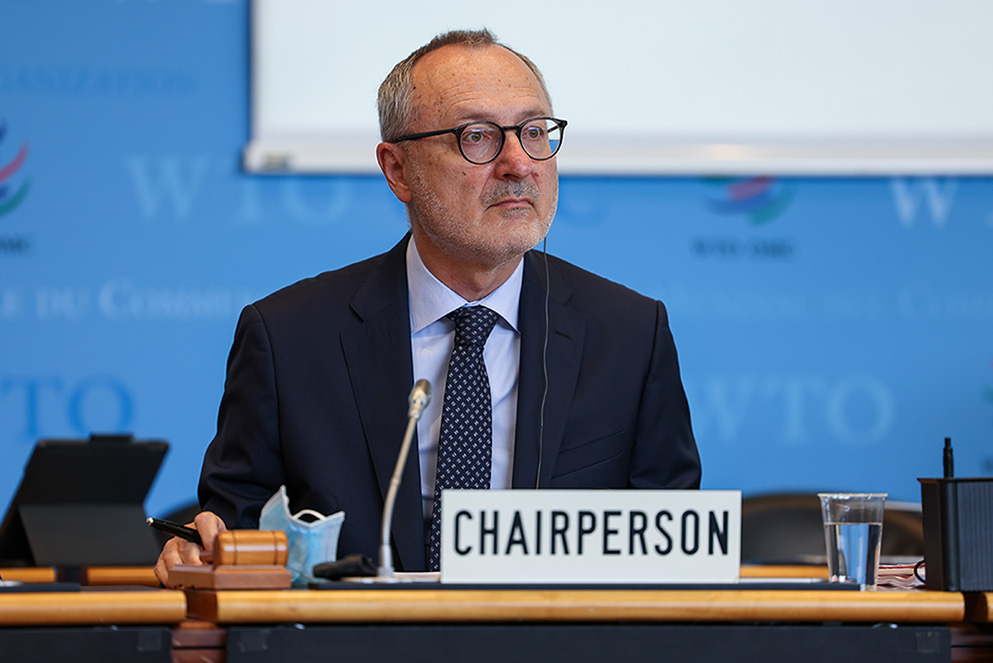