The General Council Chair called the meeting following weeks of consultations with delegations on the way forward. In those conversations, members were of the view that only a holistic, comprehensive and balanced outcome on the WTO pandemic response would be credible. Delegations expressed willingness and eagerness to continue working on this crucial topic, with the objective of achieving results, and to do so without delay, he said.

The consultations highlighted the need for further work on the text put forth late last year by former Ambassador David Walker of New Zealand, who was facilitating talks among WTO members aimed at finding a multilateral and horizontal response to the COVID-19 pandemic. Members also called attention to the ongoing high-level consultations led by DG Okonjo-Iweala and Deputy Director-General Anabel González with a handful of key members on the intellectual property-related aspects of the pandemic response, which is being negotiated by the full membership in the TRIPS Council.

Ambassador Castillo said the meeting he had convened should in no way be construed as starting from scratch. “We all recognize the enormous effort, work and contributions that were made last year,” he said, calling on members to “draw upon and improve” Ambassador Walker's texts as well as their own proposals.

The General Council Chair acknowledged the differences between WTO members not only on substance but also on how to carry the discussions forward. Several delegations expressed interest in squaring the circle urgently, while others were more cautious and hesitant to immediately re-engage at this point in time. “But I believe that a path forward can still be found and that these divergences should not stop us from progressing,” he said.

He called on members to give the process he was leading a fighting chance: “I appeal to you to engage in building up — not down — what we have before us. Let us work together to see how and where we can improve. For us to reach an acceptable outcome, everyone will have to be prepared to share the pain. It does not sound like we are in for rosy days ahead, but I know the pain will be worth the effort.”

DG Okonjo-Iweala thanked members for a “very constructive” discussion in which all delegations recognized the importance, for the credibility of the WTO, of agreeing on a meaningful pandemic response. She also noted “the acknowledgement that this demands a holistic approach, both on the side of intellectual property but also on the side of the other trade-related aspects for very sensible reasons, and this is that one cannot move without the other.”

On the trade-related angle, DG Okonjo-Iweala stressed that most delegations see the facilitator's text as the basis to proceed despite the existing divergences. She said that “with goodwill those who have difficulties with it will be able to get their views in and get this resolved.”

Regarding the small-group discussions on the IP-related aspects of the pandemic response, she asked for members' patience. “This is a very difficult issue. If it were easy, it would have been resolved in the almost two years that this discussion has been going on (in the TRIPS Council). This small group process … is going on but it is very tough. I have to say there is no easy road.”

In conclusion, DG Okonjo-Iweala said: “We should strive to get this result out by the end of February. It will be really sad if this organization keeps talking and debating on this pandemic, and that by the time we come up with a response people will not think it relevant. I think we should really move with all speed to try and conclude this by the end of February.” This was in line with the timeline she and the General Council Chair had spelled out in a letter sent to members in December.

Looking ahead, the General Council Chair said he intended to use a “cocktail of approaches,” convening delegations in a variety of different configurations. He indicated that he would start in the coming days by holding a meeting with group coordinators and a number of other delegations in a representative group format. “Let me reiterate that I attach utmost importance to transparency and inclusiveness at all stages. My intention and that of the Director-General is that we should be able to have a mutually agreeable draft by the end of February.” 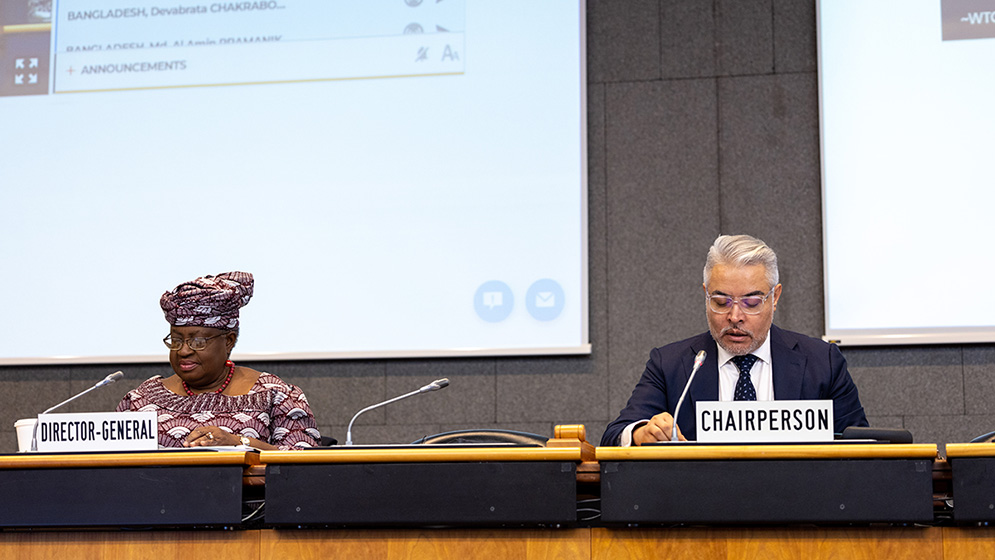