COUNCIL FOR TRADE IN GOODS

The Chair, Ambassador Etienne Oudot de Dainville, informed members of his meetings and consultations on how the Council should move forward with three implementation issues arising from the 12th Ministerial Conference (MC12), namely the work programme on electronic commerce, the WTO's response to the COVID-19 pandemic, and WTO reform.

On 19 October, Ambassador Oudot de Dainville met with the chairs of the 14 subsidiary bodies that report to the Council for Trade in Goods to request them to prepare two factual reports on activities undertaken in the context of the response to the pandemic and the current functioning of their committees. The Chair has also worked with the WTO Secretariat to prepare equivalent reports for the Council. Once these reports have been circulated, he will convene a meeting early next year so that they can be presented by the various chairs and members can begin discussing the way forward on these issues.

Finally, the Council will hold briefings on 9 and 12 December to share information about the WTO's digital tools that are used by some committees (for example, e-Agenda, Trade Concerns Database, the Notifications Portal, and ePing) and how they can assist delegations in their work.

Members stressed the importance of the planning and sequencing of meetings and the need to avoid subsequent changes, which was disruptive, particularly for small delegations.

Members once again discussed document G/C/W/752, submitted in April 2018 by the LDC Group. The main purpose of this proposal is to enable graduated LDCs with a gross national product (GNP) below USD 1,000 to benefit from treatment similar to that accorded to certain developing countries listed in Annex VII(b) of the Agreement on Subsidies and Countervailing Measures, i.e. exemption from the provision on export subsidies.

On behalf of the LDC Group, Bangladesh asked the Council for Trade in Goods to approve this submission and recommend it to the General Council for appropriate action. Such a decision was required for clarity and predictability, stressed Bangladesh.

Following a request made in July 2021, the Secretariat updated the GNP of all members, and the updated GNPs were circulated in November 2021 in document G/SCM/W/585. The LDC Group noted that, in light of the updated information, it was evident that many LDCs may graduate from the LDC category with a GNPI per capita below the threshold of USD 1,000 in constant USD 1990 terms.

The LDC Group thanked those members that had been supporting this proposal since its submission in 2018 and committed itself to remaining engaged to work on feasible solutions to this issue. Some developed country members noted that the Secretariat's calculations confirmed that gaps remained in the information needed for this proposal to be workable from a technical perspective.

Mindful of the challenges that graduated LDCs faced, these members reiterated their willingness to consider further ideas and proposals as to how to approach workable solutions for all.

Members addressed three items referred by the Committee on Market Access. The first concerned a draft decision (G/C/W/822) on the derestriction of Uruguay Round negotiating materials, including the requests and offers that were used in such negotiations. This document contains the complete list of documents that members agreed to derestrict, which will be forwarded to the General Council for adoption.

The Council also agreed to forward to the General Council four draft collective requests for waiver extensions concerning the introduction of changes to the Harmonized System (HS) into WTO schedules of concessions, which were circulated as documents G/C/W/815, G/C/W/816, G/C/W/817 and G/C/W/818. These documents propose one-year extensions of the draft collective waiver decisions for HS2002, HS2007, HS2012 and HS2017, all of which expire on 31 December 2022.

Similarly, the Council agreed to forward a new draft waiver decision (G/C/W/820) entitled “Introduction of HS2022 Changes to WTO Schedules of Tariff Concessions”. This draft decision follows the same approach as that for previous transposition exercises granting a collective derogation.

The next formal meeting of the Council for Trade in Goods is scheduled for 3-4 April 2023. 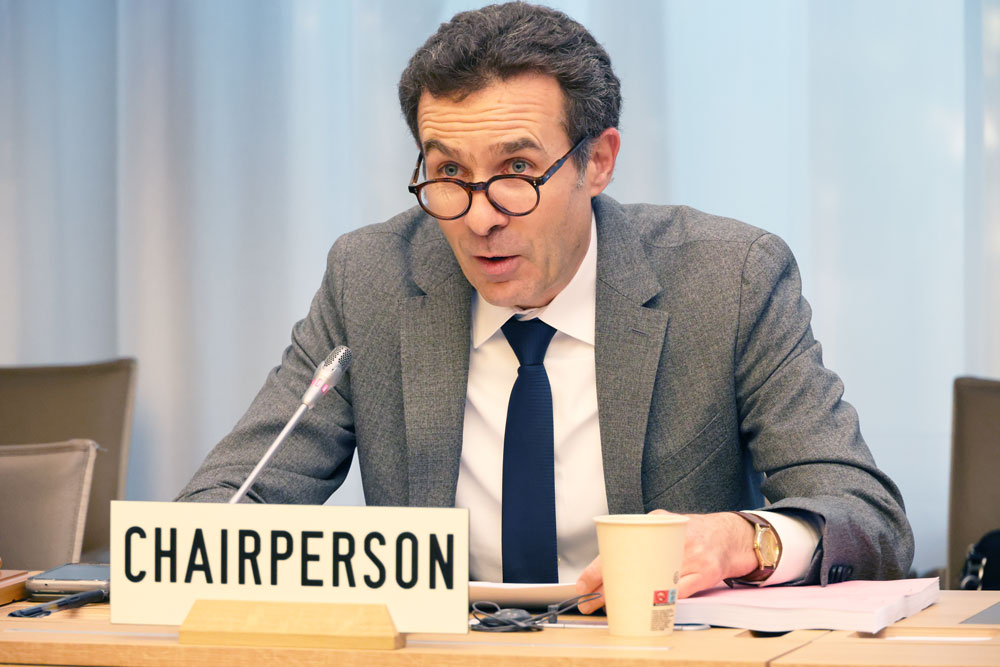 Chair of the Council for Trade in Goods, Ambassador Etienne Oudot de Dainville.