In her opening speech to the Conference, DG Okonjo-Iweala stressed that over the next few days members will “have a chance to show the world that the WTO can step up to the plate.” Striking agreements in Geneva “will enhance the ability of all members to respond to people's aspirations at home — aspirations for food, for health, for security, for better jobs, higher living standards, and a sustainable environment on land, in the oceans, and in our atmosphere,” she said.

Stressing the value of the multilateral trading system as a global public good which over the past 75 years has delivered more prosperity than every international economic order that came before it, DG Okonjo-Iweala noted that at a time when the multilateral system is seemingly fragile “this is the time to invest in it, not to retreat; this is the time to summon the much-needed political will to show that the WTO can be part of the solution to the multiple crises of the global commons we face.” “Now, more than ever, the world needs WTO members to come together and deliver,” she added.

Citing WTO economists' estimations of real global GDP lowering by about 5 per cent if the world economy decouples into self-contained trading blocs, DG Okonjo-Iweala stressed the substantial costs for governments and constituents in a scenario where WTO members are unable to deliver results and where they allow, or even embrace, economic and regulatory fragmentation.

“To put this in perspective, the financial crisis of 2008-09 is estimated to have lowered rich countries' long-run potential output by 3.5 per cent. And the 5 per cent estimate represents just the start of the economic damage. Additional losses would come from reduced scale economies, transition costs for businesses and workers, disorderly resource allocation, and financial distress,” she said.

Also, trade decoupling would entrench the development setbacks caused by the COVID-19 pandemic, making it much harder for poor countries to catch up with richer ones. “This would be a world of diminished opportunities, even greater political anger and social unrest, and intense migratory pressures as people leave in search of better lives elsewhere,” she added.

DG Okonjo-Iweala urged members to avoid allowing geopolitical tensions to spill over into the work at the WTO as the consequences for the multilateral trading system would be severe. She expressed optimism that “with the requisite political will, we can tackle the negotiations in front of us, endorse the declarations, and take the decisions that will show the world that the WTO is part of the solution to the world's pressing problems.”

Various thematic sessions will take place during the Ministerial Conference to respond to ongoing emergencies, particularly the COVID-19 pandemic and the food crisis, she said. Ministers will also have the opportunity to engage in other thematic sessions on fisheries, agriculture, WTO reform, and the e-commerce work programme and moratorium.

Following the opening session, ministers exchanged views on the challenges facing the multilateral trading system, with 103 members and observers expressing interest in taking the floor. “The high number of interventions is a testament both to the WTO's relevance and the challenging conjuncture we are in. I hope this session will enable ministers to jump into action tomorrow to tackle the full agenda we have in front of us for MC12,” the DG said.

“Will the road to deliver at this MC be smooth? Absolutely not. Expect a rocky, bumpy road with a few landmines along the way. But we shall overcome them,” she told members.

Her full speech is available here.

The 12th Ministerial Conference (MC12), which will run until 15 June, is being chaired by Mr Timur Suleimenov, First Deputy Chief of Staff of the President of Kazakhstan and MC12 Chair. MC12 was initially scheduled to take place in Nur-Sultan, Kazakhstan, in June 2020 but was postponed twice due to restrictions in response to the COVID-19 pandemic.

In his opening remarks, Mr Suleimenov referred to the unprecedented challenges the multilateral trading system is facing. “We are currently living in a once in a generation period that demands collective action from all of us, and MC12 presents a unique opportunity for us to make this happen. Over the next three days, the world's eyes are on the WTO. We have a chance to address some of the major challenges facing the global economy,” he said.

The MC12 Chair stressed that ministers in Geneva have an opportunity to provide both guidance and impetus on how agriculture negotiations will be carried forward and to finally curb harmful fishery subsidies through a balanced package that takes into consideration the principle of special and differential treatment for developing countries. In addition, members should bring about a declaration that captures the collective resolve and commitment to future WTO work, he said.

Ambassador Didier Chambovey of Switzerland, Chair of the General Council, emphasized the importance of the Ministerial Conference at a time when the WTO and the multilateral trading system are facing many challenges. “Your presence here will provide us with much needed impetus to strengthen and invigorate this fundamental role of the WTO,” he said.

Ministers have not met since the 11th Ministerial Conference in Buenos Aires in December 2017 but  work has continued in many areas with some notable results, said Ambassador Chambovey. In February this year, the General Council agreed to establish the Working Party on the Accession of Turkmenistan, and in March the General Council endorsed a final decision on the Bali tariff rate quota underfill mechanism.

The General Council Chair also referred to the decision in November 2020 to forward two draft decisions to ministers for adoption -  on the Work Programme  on Small Economies and on the moratorium on non-violation and situation complaints in the area of intellectual property.

In addition, he announced that the remaining reservations to a draft Sanitary and Phytosanitary (SPS) Ministerial Declaration have now been lifted, opening the door for the declaration to be adopted by ministers at MC12.

Outstanding issues that will require further discussion are WTO reform, women's economic empowerment,  micro, small and medium sized enterprises (MSMEs), e-commerce — particularly on the continuation of the Work Programme and extension of the moratorium on customs duties on electronic transmissions – and graduation from the status of least-developed countries.

All these issues are reflected in the draft MC12 outcome document submitted to ministers, he said. “Members have worked tirelessly in several different areas in preparation for this ministerial in an effort to achieve results. These efforts have led to the draft text before you for your consideration during this Conference,” said Ambassador Chambovey.

Pre-recorded and written statements delivered by trade ministers and heads of delegation have been posted on the WTO website following the opening session. WTO members and observers were asked to submit these statements ahead of MC12 rather than deliver them in person in plenary sessions, which has been the practice followed in previous ministerial conferences. 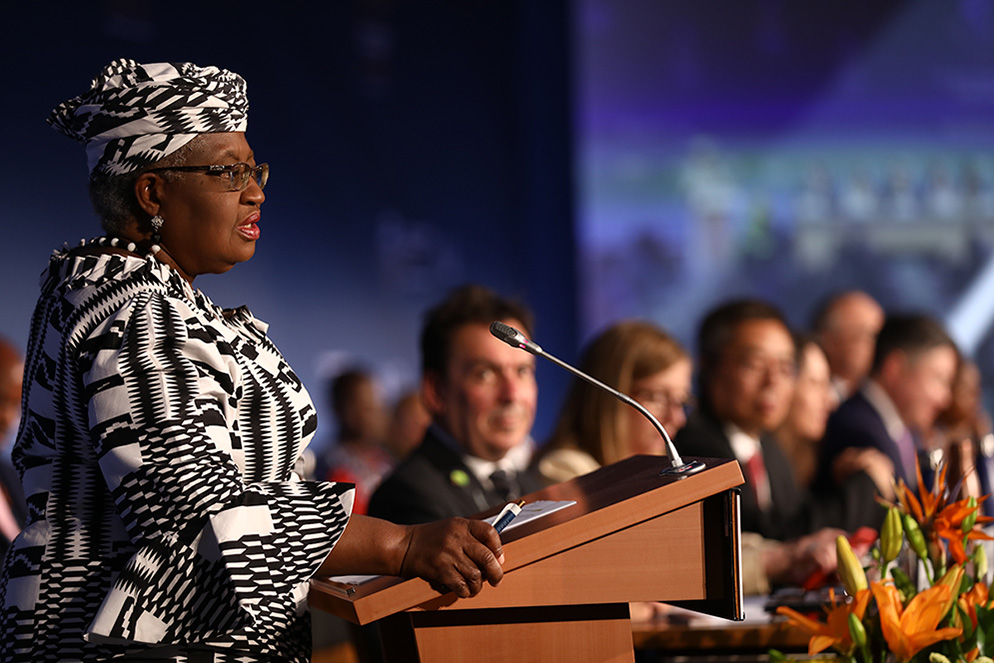