With less than 24 hours left before the scheduled closing of MC12, the DG told members at a meeting of Heads of Delegations (HoDs) that a great amount of hard work has been going on in each and every negotiating process but that more time might be needed in order to come to a conclusion.

“It requires that we work harder and work nights, whatever it takes to be able to do it. The good news is … that progress is being made but it needs a little more work and more time,” said DG Okonjo-Iweala. “The not so good news is that we are running out of time, so I think it is really time for ministers to make the requisite decisions that need to be made.”

The DG noted that some delegations approached her to suggest that MC12 could go on for an extra day. “They feel that we really can cross the line on some of these things if we gave it a bit more time, so I just throw that out there for your consideration. We can all sleep over it and perhaps we will take the pulse tomorrow to see if that is needed or not,” she added.

Timur Suleimenov, First Deputy Chief of Staff of the President of Kazakhstan and MC12 Chair, said:  “I think this is something that we need to consider, and we will come back to this issue tomorrow.”

Mr Suleimenov stressed that additional meetings will continue in various configurations and reiterated the sense of urgency. “This is crunch time obviously. And regardless of whether we will have an extra day or not, we need to utilize the time remaining to the fullest extent,” he added.

The MC12 Chair reported on the thematic sessions that took place today — on fisheries subsidies and agriculture — where, he said, he did not witness the same flexibility and self-restraint expressed by members in the thematic sessions of the previous day on the WTO response to the pandemic, including the intellectual property (IP) response, and on trade and food security. “WTO members' positions were not as flexible as I would have wished them to be at this point,” he said.

Echoing the statement by the Director-General, Mr Suleimenov indicated that members know by now what is doable, what needs more time for discussion and what is not possible. “Any attempt to backload the final 22 hours of this conference only increases the chance that all of us will go home empty handed. And I know that this is contrary to what the world expects from us,” he added.

He made an appeal to “start blessing outcomes” to ensure the success of MC12. “With your collective will, we should be able to close those issues. In other areas where there is no agreement, there is a need to intensify efforts to bridge gaps and provide much needed ministerial guidance.”

The meeting of the Heads of Delegation was preceded by a morning thematic session on fisheries subsidies, facilitated by Damien O'Connor, Minister of Trade and Export Growth of New Zealand, and an afternoon thematic session on agriculture, facilitated by Betty Maina, Cabinet Secretary for Industrialization, Trade and Enterprise Development of Kenya.

Minister O'Connor said that overwhelmingly statements made by members stressed the need to conclude an agreement after more than 20 years of discussions. “I am, as always, optimistic about what I have heard today and that we can get to agreement,” said Minister O'Connor, who together with the chair of the fisheries subsidies negotiations, Ambassador Santiago Wills of Colombia, will continue to consult and meet with members in different configurations to reach an outcome.

“It's also clear that for most of you the differences are not that big, and that they are within the ranges of the draft text. Having said that, it's clear that there are some members that are outside the ranges that we have talked about. I'm not questioning the reasoning behind these positions, but I would note that they do not seem to have attracted convergence or consensus,” he added.

A total of 67 members took the floor during the fisheries thematic session, which was preceded by a press conference to introduce the fisheries funding mechanism.

On agriculture, Cabinet Secretary Betty Maina also noted the overwhelming majority in support of continuing the discussions, even having expressed the view that the text on the WTO agriculture negotiations may not represent the full extent of the ambition some members would have liked to see for such an important subject. “Nevertheless, there is an indication of commitment to continue discussing all the specific concerns of different countries after MC12, and hopefully approach MC13 with some greater progress.”

She thanked members who expressed readiness to restrain themselves from amending the existing language so that a decision can be reached before the end of the Conference. “For those who still have concerns, I hope I can persuade you that we can work on a work programme to address the concerns that you still have after this meeting so long as we can reach a decision to continue the discussion,” she said.

Jerome Walcott, Minister of Foreign Affairs and Foreign Trade of Barbados, updated members on the negotiations for a WTO response to the pandemic, including the TRIPS waiver. Keisal Peters, Minister of State with Responsibility for Foreign Affairs and Foreign Trade of Saint Vincent and the Grenadines, outlined the work done on the e-commerce work programme and moratorium.

Kamina Johnson Smith, Minister of Foreign Affairs and Foreign Trade of Jamaica and facilitator on WTO reform, said that members made progress but have not managed to bridge the remaining gaps and narrow the differences to reach convergence on the forum for reform. “Today's conversations have reconfirmed that we all agree on the need to reform and it's in this context that I urge you all to agree that we commence this crucially important conversation, post MC12,” she said.

Minister Johnson Smith will update members at the thematic session on this issue on 15 June, where she will present a report on the intensive consultations that she has been conducting in various configurations over the past few days.

Finally, the MC12 Chair told members about his efforts related to some outstanding matters in the MC12 outcome document. His consultations focused on the three paragraphs that are still bracketed, indicating lack of consensus, and presented separately at the end of the text, as put forward by proponents.

These are related to women's economic empowerment, micro, small and medium-sized enterprises (MSMEs), and environment. “I understand that there is large support to remove the brackets around these paragraphs, but so far, regrettably, no consensus has emerged,” he said 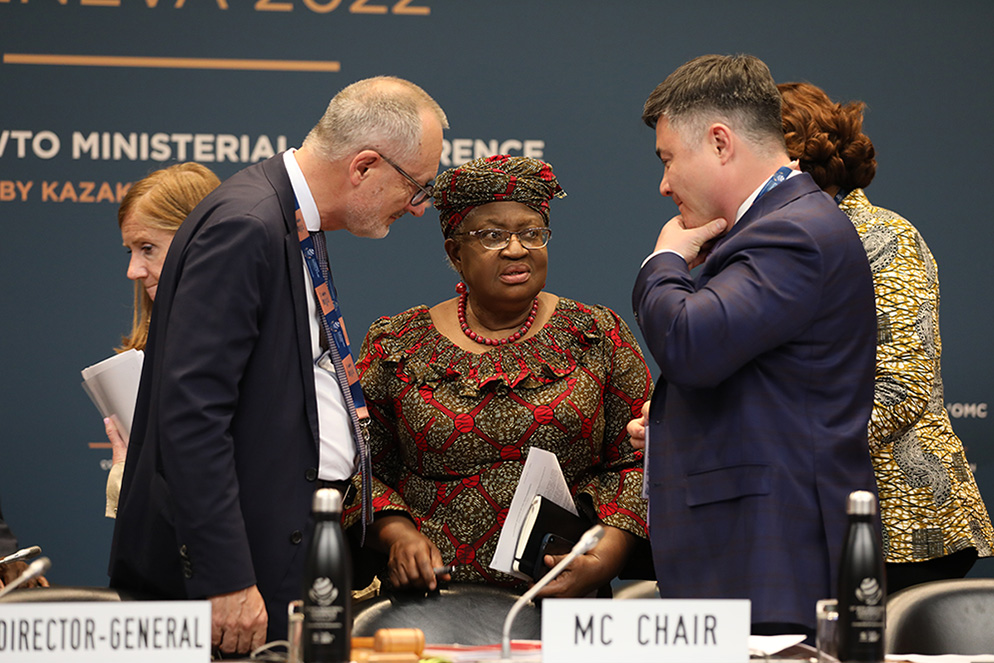