Launched in November 2020, TESSD seeks to advance members' discussions at the intersection of trade and environment and complement the work of the WTO Committee on Trade and Environment. Participating members, of which there are now 74 representing around 85% of world trade, subsequently issued a Ministerial Statement agreeing to endeavour towards concrete actions and a work plan to guide efforts in 2022.

Ahead of the stocktaking event, a summary report was issued capturing the range of TESSD work in 2022. The TESSD co-convenors, Ambassador Nadia Theodore of Canada and Ambassador Ronald Saborío of Costa Rica, also circulated a statement recognizing the progress made this year and indicating how participating members intend to pursue more focused work in 2023.

“These Trade and Environmental Sustainability Structured Discussions are a trailblazer at the WTO,” DG Okonjo-Iweala said at the event's opening session. “You are searching for practical solutions and concrete actions to catalyse the trade and environment agenda. You are breaking down silos and cooperating across traditional structures and fields of expertise to find solutions to global problems.”

“I would urge you to move from ambition and discussion to action and to create a menu of options and pathways for expanding sustainable trade, investment, and innovation in support of global environmental objectives. Let me also remind you to give importance in your work to the needs of those most vulnerable to the risks of climate change and other environmental challenges,” she said.

“The opportunity is there — you have it — to identify, develop and deliver tangible outcomes for MC13,” the Director-General continued. “The world is paying attention. You are demonstrating to that world that trade is part of the solution, not the problem. Now, let's deliver.” Her full remarks are available here.

Pamela Coke-Hamilton, Executive Director of the International Trade Centre, highlighted in the opening session the need to also consider supportive policies for micro, small, and medium-sized enterprises (MSMEs). Pedro Manuel Moreno, Deputy Secretary-General of the UN Conference on Trade and Development (UNCTAD), noted that concerns of developing countries and least-developed countries are reflected across all TESSD topics and that UNCTAD will continue to instil a global development perspective in the discussions.

Ambassador Saborío, speaking as TESSD co-convener, remarked on how participating members intensified work in 2022 amid a global energy crisis and narrowed their focus through four informal working groups tackling the issues of trade-related climate measures, environmental goods and services, circular economy-circularity, and subsidies. “The progress we have made in the four tracks is remarkable,” he said.

Ambassador Theodore, also speaking as co-convener, noted that members have selected a smaller sub-set of topics for the next phase of discussions, making reference to the issues outlined in the co-conveners' joint statement.

According to the statement, the Working Group on Trade-related Climate Measures will review different forms of carbon measurement standards and measures. The Working Group on Environmental Goods and Services will pursue an objective-based approach, with the first environmental objective being climate change adaptation and mitigation, and the first sectoral focus being on renewable energy.

The Working Group on Circular Economy — Circularity will undertake a mapping exercise to build a broader understanding of the aspects of trade and trade policy which are relevant to each part of the life cycle, and will also pursue sector-specific discussions starting with renewable energy and electronics. The Working Group on Subsidies, in its continuation of work on the environmental effects of subsidies, will begin discussions focusing on agricultural subsidies and subsidies related to the transition to a low-carbon economy.

“We fully expect that our discussions will continue to evolve and that we will add new sectors and new areas of analysis to our list in the future,” Ambassador Theodore said, adding that members should keep in mind their goal to identify concrete actions that can be taken individually or collectively. “I encourage all of our co-sponsors to think creatively about how we can live up to that goal.”

The co-convenors also highlighted the importance of reflecting the diversity of the membership, continuing to consider the needs of developing and least-developed members and MSMEs, and working with other organizations and stakeholders.

This was followed by a rich exchange among ambassadors from the floor, who shared  their views on the TESSD discussions and priorities. Other stakeholders also had the opportunity to share their perspectives on TESSD discussions.

Closing the stocktaking event, Deputy Director-General Jean-Marie Paugam lauded members' progress in putting sustainability and climate change as a core issue on the global trade agenda and noted some suggestions for further work and concrete actions.

“I'm impressed like you to see how the world and the WTO have changed in less than one year when it comes to discussing sustainability and climate change,” DDG Paugam said. “Today's stocktaking event proves that TESSD has been moving in the right direction and provides ideas that will be useful for the wider WTO membership.”

“TESSD has all the potential to help advance the WTO's broader agenda by the 13th Ministerial Conference, and the WTO's position in supporting actions on environmental sustainability in the coming years.” DDG Paugam's full remarks are available here. 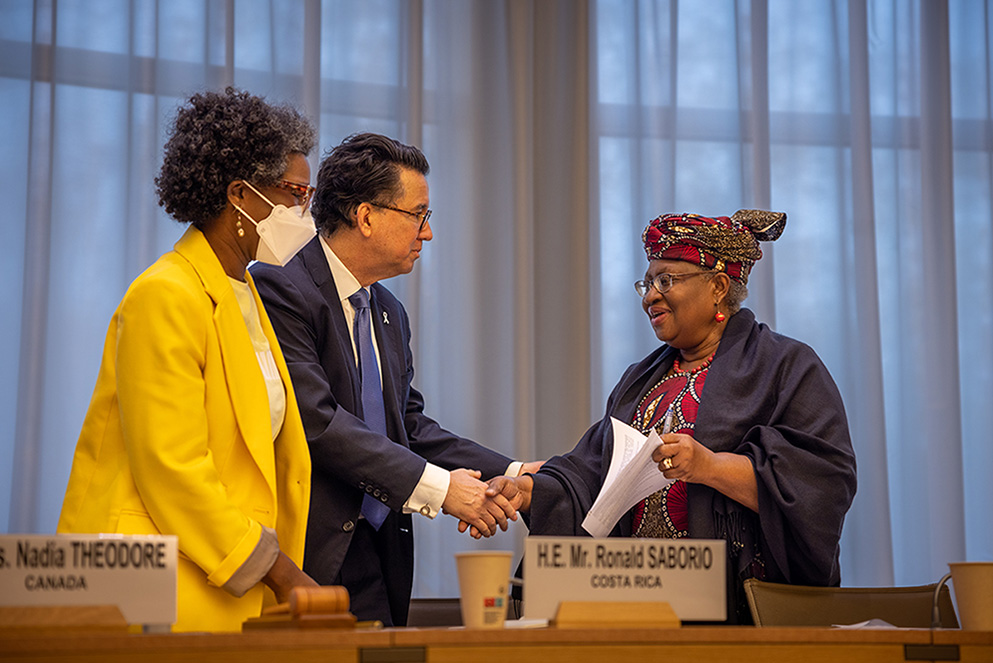