“The darkening outlook for trade is discouraging but not unexpected. Beyond their direct effects, trade conflicts heighten uncertainty, which is leading some businesses to delay the productivity-enhancing investments that are essential to raising living standards," said WTO Director-General Roberto Azevêdo. "Job creation may also be hampered as firms employ fewer workers to produce goods and services for export."

"Resolving trade disagreements would allow WTO members to avoid such costs," the WTO Director-General added. "The multilateral trading system remains the most important global forum for settling differences and providing solutions for the challenges of the 21st century global economy. Members should work together in a spirit of cooperation to reform the WTO and make it even stronger and more effective.”

The updated trade forecast is based on consensus estimates of world GDP growth of 2.3% at market exchange rates for both 2019 and 2020, down from 2.6% previously. Slowing economic growth is partly due to rising trade tensions but also reflects country-specific cyclical and structural factors, including the shifting monetary policy stance in developed economies and Brexit-related uncertainty in the European Union. Macroeconomic risks are firmly tilted to the downside.

Due to the high degree of uncertainty associated with trade forecasts under current conditions, the estimated growth rate for world trade in 2019 is placed within a range of 0.5% to 1.6%. Trade growth could fall below this range if trade tensions continue to build, or outperform it if they start to recede. The range of likely values is wider for 2020, ranging from 1.7% to 3.7%, with better outcomes depending on an easing of trade tensions.

Risks to the forecast are heavily weighted to the downside and dominated by trade policy. Further rounds of tariffs and retaliation could produce a destructive cycle of recrimination. Shifting monetary and fiscal policies could destabilize volatile financial markets. A sharper slowing of the global economy could produce an even bigger downturn in trade. Finally, a disorderly Brexit could have a significant regional impact, mostly confined to Europe.

Charts 1 and 2 show quarterly merchandise export and import volumes on a seasonally-adjusted basis by level of development and geographic region. In the first half of 2019, world merchandise trade was up 0.6% compared to the same period in the previous year. This marks a substantial slowdown compared to recent years. Exports of developed economies were up just 0.2% for the year-to-date, while those of developing economies were up 1.3%. On the import side, developed economies recorded year-on-year growth of 1.1% while developing countries declined by 0.4%. Growth rates based on quarterly data may differ slightly from calculations based on annual statistics, but they should be of similar magnitude.

1 Refers to South and Central America and the Caribbean.
2 Other regions comprise Africa, Middle East and the Commonwealth of Independent States, including associate and former member States.
Source: WTO and UNCTAD.

All geographical regions recorded positive year-on-year export growth in the first half of 2019 despite a substantial weakening of global demand. North America had the fastest export growth of any region at 1.4%, followed by South America at 1.3%, Europe at 0.7%, Asia at 0.7%, and Other regions (comprising Africa, the Middle East and the Commonwealth of Independent States, including associate and former member States) at 0.1%.

North America recorded the fastest import growth of any single region at 1.8%, followed by Europe at 0.2%. Two regions registered declines (South America at -0.7% and Asia at -0.4%). Collectively, the imports of Other regions grew faster than those of North America, at 2.4%. Import demand has been particularly weak in Asia, weighing heavily on exporters of manufactured goods (e.g. Japan, Korea, and Germany). Exporters of natural resources have also seen demand for their products weaken, as evidenced by the 12% year-on-year decline in commodity prices in August.

Monthly economic indicators provide some worrying clues about the current and future trajectory of world trade. An index of new export orders derived from purchasing managers' indices has fallen from 54.0 in January 2018 to 47.5 in August 2019, the weakest reading since October 2012 (Chart 4). Note that values below 50.0 signal contraction. 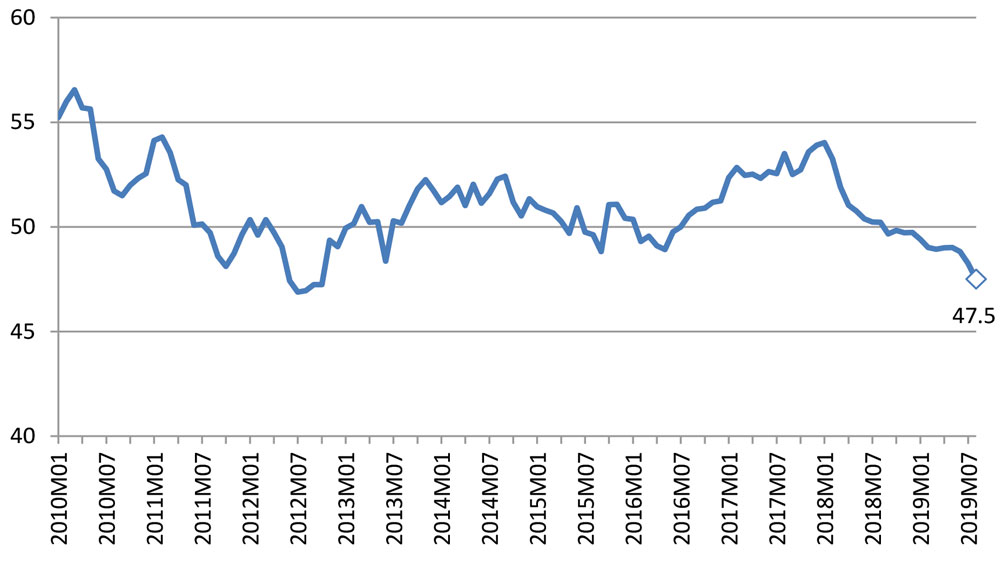 A separate indicator based on the frequency of phrases in press reports captures aspects of monetary, fiscal and trade policy uncertainty (Chart 5). In 2019, the index has risen from 289 in January to 348 in August, its highest level ever. To the extent that economic uncertainty deters investment, it can have a disproportionately negative effect on trade since capital goods that make up investments tend to have high import content. 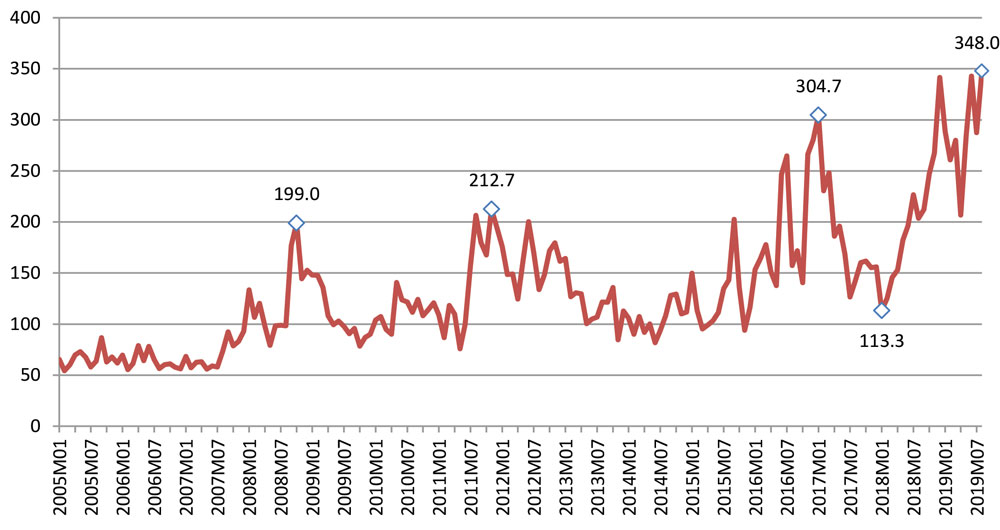 Monthly merchandise trade values in current US dollar terms are shown for selected economies in Chart 6 below. Some countries (e.g. the United States and China) may show signs of a turnaround while others (the Republic of Korea and Japan) provide no such indication. Nominal trade statistics are strongly influenced by prices and exchange rates, so these trends should be interpreted with caution.

If current GDP estimates are realised, the volume of world merchandise trade should increase by 1.2% in 2019 (Table 1), but this would require a degree of recovery in the second half of the year. Monetary easing in developed countries has not had a major impact to date but is likely to be felt toward the end of 2019 and into 2020. Other measures, including fiscal policies for surplus countries, are being undertaken to stem the current slowdown. These measures could provide some upside potential to the forecast, especially if outstanding trade disputes are resolved. However, the balance of risk remains on the downside, with trade disputes, financial volatility and geopolitical tensions providing potential triggers for a steeper downturn. 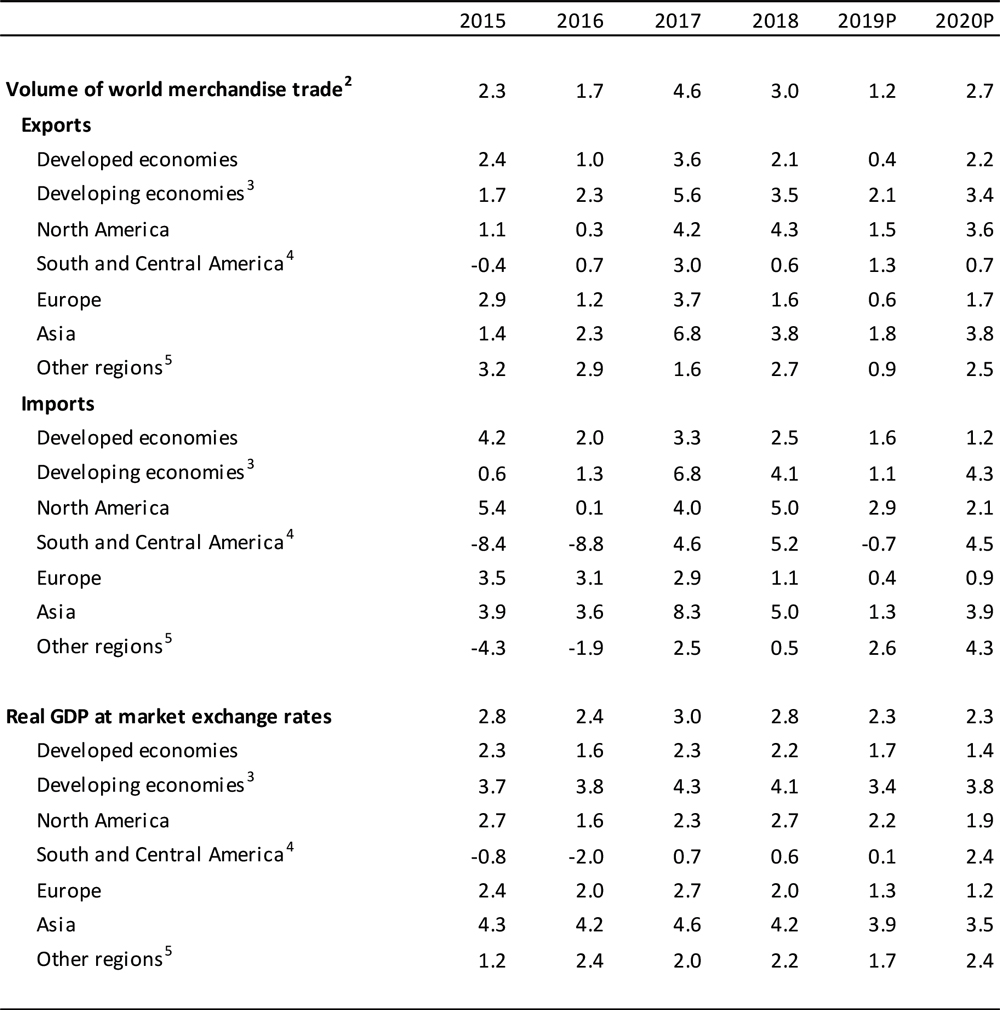 1 Figures for 2019 and 2020 are projections.
2 Average of exports and imports.
3 Includes the Commonwealth of Independent States (CIS), including associate and former member States.
4 Refers to South and Central America and the Caribbean.
5 Other regions comprise Africa, Middle East and Commonwealth of Independent States (CIS).
Source: WTO and UNCTAD for trade, consensus estimates for GDP. 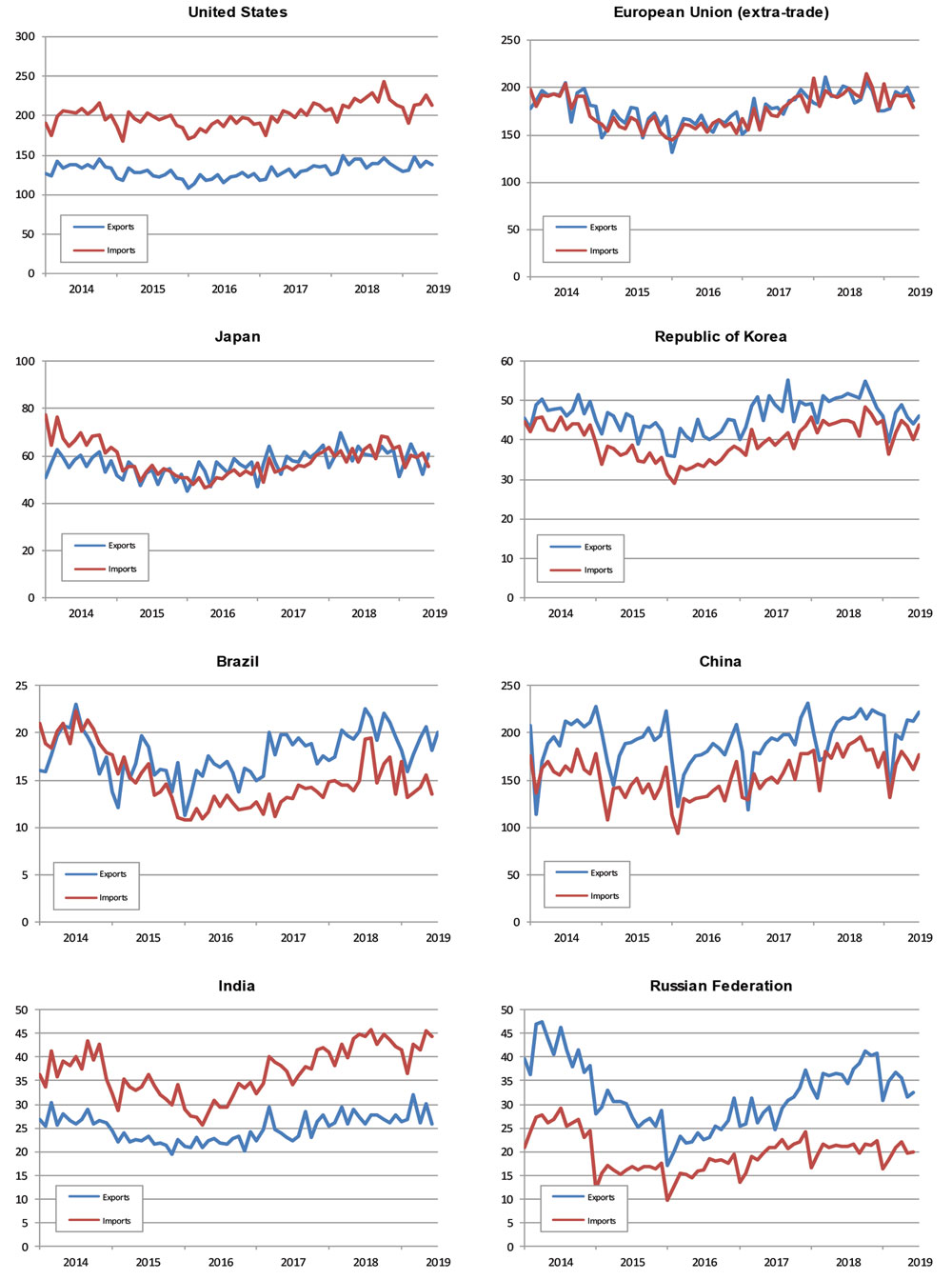