More than 100 years ago, the Spanish philosopher George Santayana said “those who cannot remember the past are condemned to repeat it”.

The founders of the global trading system took him at his word. They saw the merit in creating the system in part because they remembered the past so well. They remembered Congressman Hawley and Senator Smoot, whose pictures I have in my office to remind me of who the real founders of the WTO were. And they remembered how their notorious act accelerated the protectionist spiral that led world trade to contract by two-thirds from 1929 to 1934.

A system for opening trade through international rules and within the principles of non-discrimination, transparency and predictability has provided us with an insurance policy against the kinds of policy excesses of the 1930s. And it has provided a platform for growth, development and poverty alleviation around the world.

Over time, the General Agreement on Tariffs and Trade (GATT) evolved into the World Trade Organization, and the WTO itself has evolved in ways both large and small. Our dispute settlement system, unique in the field of international conflict resolution, has contributed to peacefully resolving trade differences. The Aid for Trade Programme which we oversee has mobilized $200 billion since it was launched in 2005. The organization’s monitoring and surveillance capacity has helped to keep protectionism in check.

The WTO has also become the place you think about when the topic is trade. Increasingly, this organization is seen as the centre of intellectual leadership on trade and our work on global value chains and value added trade has set the tone for the global debate.

Craig VanGrasstek has done us a great service by researching and writing this book. We have commissioned the book but we have given Craig absolute academic freedom to pursue the facts that constitute the threads in the tapestry of the WTO’s history (history with a small “h”!). He has carefully documented the events that have contributed to the WTO’s transformation from an organization to an institution which commands centre stage in the field of trade.

He has chronicled our successes and our setbacks from the corridors of the Centre William Rappard to the streets of Seattle. He has delved into the details of the Swiss formula, dispute settlement and decision making in the WTO. But he also explains clearly the case for trade and the value of our organization.

Craig has also usefully pointed at how the organization may evolve in the future. Craig, I know you have put many hours of work and long sleepless nights into producing this book. And I also know that Alejandro Jara has shared many of these moments with you. My thanks go to you.

Trade has changed a great deal in the past ten years. Today, the patterns of trade, the actors involved with trade and the obstacles to trade are very different than they were a decade ago.

Global value chains have profoundly changed the way we trade. Where before we traded in goods, today we trade in tasks.

The fact that goods are increasingly made in the world rather than in any single country means we need to measure trade in value-added rather than gross terms to better understand how global value chains contribute to local economies and to help us devise more effective and realistic trade policies.

The actors have changed too. In 1980, China had 1 per cent of the world’s exports; by 2011, China’s share was 11 per cent. During that same time, Korea more than tripled its share of global exports and Mexico doubled its share. For the first time in history, the South is responsible for more than half of the world’s economic activity and more than half of global exports. South-South trade now comprises 24 per cent of world trade, double what it was in 2000.

In the past, trade negotiations were simpler: between rich countries, reciprocity was the template for negotiations while the main theme for poor countries was flexibility. Today, these lines have blurred and emerging countries have taken on greater commitments than ever before.

And the barriers that we encounter in trade today are very different from your standard tariff, the measure of choice for centuries because of its effectiveness in protecting producers. When one talks to businesses today, however, you quickly learn that tariffs are not the problem they find most onerous. Rather, they say the real difficulty is non-tariff measures. Today, the barriers that exporters encounter are more likely to be of a regulatory nature pertaining to car emission limits, bank regulations, product and food safety standards or customs procedures.

While we can never predict anything with complete certainty, we are confident that these trends will continue into the future. As Santayana suggests, when charting a course for the future, history is among our best tools. Examination of the way that trade has changed in the last decade offers clues that can make navigating the future more manageable. And in this respect, the WTO’s 2013 World Trade Report can be read as a postface to Craig’s book. But history is a compass, not a roadmap or a GPS. History tells us what routes have been successful thoroughfares and which have been culs-de-sac. But it won’t identify every sharp turn or bump in the road.

We cannot foretell every economic shock or the impact of the next technological breakthrough. But we know there will be future economic turbulence and we know that tomorrow’s technological innovations will shape the trading environment of the future just as computer tablets, mobile telephony and satellite navigation influence the patterns of trade today.

The History and Future of the World Trade Organization is a reference, one I hope you all will find valuable. It is also the book of record of the relatively short but immensely full life of the WTO. Even more than this, by providing a reflection on what has been, this book may well guide us on what will be. And this way we will be able to keep making history.

Let me, in closing, thank the moderator, Fook Seng, and the panellists. They have been actors of the WTO history as General Council chairs. And we thought that the best way to test Craig’s book would be to hear from the horses’ mouth. Celso, Fred, Kare, Stuart, thanks a lot for being with us today.

Finally, a short commercial, the book is on sale at the WTO bookshop and it will be available for download at our website shortly. Spanish and French translations are also in preparation.

Thank you for your attention.

The History and Future of the World Trade Organization 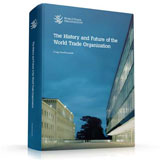 > The History and Future of the World Trade Organization