Good afternoon. I am pleased to be here at the Graduate Institute today, and to join this important conversation about the way forward in global trade.

At the outset, let me thank Deputy Prime Minister Reynders, the Belgian Government and the Centre for Trade and Economic Integration for this initiative.

I hear that you have had some very interesting discussions so far. So I am pleased to have this chance and share a few afterthoughts.

The title of the event today asks us to start at Buenos Aires. So let's do that.

What happened at MC11? While there was some progress, it's clear that members did not agree any substantive outcomes.

There are many reasons for that, let us not be simplistic about it -- but one important reason was that there were few potential trade-offs that would force flexibility.

Flexibility is essential in the process of consensus-based decision making that we follow at the WTO.

Members who want a particular outcome often calculate: 'if I block progress in other areas, the others will agree with what I'm asking'.  I was once a negotiator, I know that this is how many approach negotiations in the WTO.

This rationale does not always work:

A careful analysis of these forces and trade-offs before Buenos Aires would likely have shown that such 'hostage taking tactics' would not work.

Under any circumstances, the major problem with this approach is that it does not encourage flexibility or a search for compromise. Instead, it encourages an all-or-nothing game of ‘mutually assured destruction’.

A similar phenomenon in our consensus-based system is the 'zero risk' approach. A member can look at any initiative they don't particularly like and simply stop it from even being discussed. Of course, the outcome of such an approach is paralysis, because virtually all issues will meet some opposition from someone.

For a consensus-based system to work, participants must realize that the indiscriminate usage of the power to block will paralyze and ultimately destroy it.

So the only way forward in such a consensus-based system is:

I said at the closing ceremony in Buenos Aires that if members are not prepared to put themselves in others' shoes and seek compromises, then we have little hope to move forward. I also said that the pledges of support for the system needed to be matched by deeds.

I recently had a meeting with the ACP Group in the WTO and I was asked the question about how I see our work evolving. This is the key question today — and it is the question being asked by today's seminar.

I emphasized that the organization has changed significantly over the past 2 decades or so.

Today the bigger members can't force their views and agenda on others. But, equally, groups of members, no matter how numerous they are, cannot impose their views on others either.

In this "new normal" we have to be more flexible.

No one should be forced to accept anything or to negotiate anything they don’t want to. But, at the same time, everyone should be free to discuss issues that are of importance to them.

Flexibility has always been a feature of the multilateral trading system.

The GATT rules already had inbuilt flexibilities, in different forms.

The same applies for the WTO rules.

People often see WTO disciplines as a monolith, or as a rigid, one-size-fits-all set of rules.  However, that is far from true. While our core rules do apply to everyone, specific obligations vary considerably across the membership.

For example, members have very different levels of commitment in goods. Some have bound 100% of their tariffs, some have less than half of their tariff lines limited by a ceiling. Some have great sectoral coverage in their services commitments, while others just have obligations for just a few sectors.

And in terms of specific agreements, again flexibility is a key feature. We have:

We also have flexibility on how to discuss different issues.

Different ways of bringing issues to the table have always existed. There have always been some members willing to advance some conversations and take on more obligations than others.

Look at the Tokyo Round in the 1970s, for example. Following those negotiations, a series of agreements on non-tariff measures emerged. However, only a relatively small number of GATT members — mainly industrialized — subscribed to these agreements.

Because they were not accepted by the full GATT membership, they were often informally called “codes”. They included work on many areas, such as:

These codes were not multilateral, but they were a beginning, and helped to plant the seeds for our existing WTO multilateral agreements.

Little by little, larger developing countries started to adhere to the codes. Membership started to grow.

Several codes were eventually amended in the Uruguay Round and turned into multilateral commitments accepted by all WTO members.  It was not a "cut-and-paste" transplantation, but the codes inspired and provided the basis for the Uruguay Round texts.

This is just one illustration of how issues — often controversial at first — may be brought to the table with flexible approaches.

This brings me to the initiatives that we saw launched in Buenos Aires, which may be testing yet other forms of flexibility.

The open-ended groups created at MC11 are a somewhat new approach. And they respond to the risk of paralysis brought about by objections to any conversation on issues not already covered by the Doha Work Programme, regardless of how important they are to others or to the trade environment today.

And it is very interesting to look at the make-up of these new groups.

They do not represent a north-south divide, unlike some previous initiatives of the times of the GATT. Instead, they encompass developed, developing and least-developed countries, big and small. I don't need to go through the number of participants and their economic weight, you know that already.

I want to stress that these discussions are at a very early stage. There is a big distinction between discussing and negotiating.  If you sit down to simply discuss an issue, there is no commitment of any kind. Certainly there is no commitment to start negotiations, or to take part in them if they actually start among some others.

Time will tell how these initiatives develop. But it, in my view, is essential that these groups remain open to all. Indeed, I understand that proponents of these recent initiatives want them to eventually become multilateral, which is very much welcome.

To achieve that kind of outcome, the groups will need to build that into the process from the very start. They need to afford any and all WTO members the opportunity to participate actively and constructively from day one. Any discussions in those groups should already be taking into account the perspectives of others — including of those who are not at the table.

We will see how this work evolves. As I have stressed repeatedly, this will be up to the proponents. It is for them to take these initiatives forward as they see fit.

But we have to ask, why did members decide to create these groups?

Really if there is an issue of importance to you but perhaps not to all members, you have two options to take it forward:

If we drive these conversations away from the WTO, the danger is that they will not be open to all. And they most likely will come back to the WTO later on. When they do, those who were not included in the discussions will have missed the opportunity to make their contributions and shape the outcomes. So my preference would always be for any effort to be fully open and transparent, where anyone and everyone has a chance to shape the conversations if they so desire.

But we have to keep this work in perspective. At this stage, the initiatives I have mentioned are simply conversations between like-minded members on issues that they find economically and politically important.

And let me be clear that simply because these discussions are under way it does not mean abandoning issues that are already on the table and that need to see progress. This includes issues that are very dear to WTO members, developed and developing, such as domestic support in agriculture, food security, and development, among others.

Members — including the proponents in these open-ended groups — are not giving up any of those discussions. They want those discussions.  In Buenos Aires, and in my meetings with ministers before, during and after, there was a clear desire to keep up these debates and to find ways forward. In fact, one may even argue that it is adding other elements into the mix, which might help with progress in other areas where progress has eluded us for so long.

This brings me back to the question posed by today's event — specifically:  'are plurilaterals the new way forward in global trade?'

Plurilateral initiatives may be part of that — but as I have set out, there are ways of delivering flexibility within multilateral approaches as well. The Trade Facilitation Agreement being the most obvious example.

The success of the Trade Facilitation Agreement has been — and remains — a great, galvanising, uniting force for WTO members. It showed that flexibility and the search for common ground can deliver benefits for all. The TFA structure is certainly not a panacea. It will not work every time and in every circumstance. But it shows that solutions can be found if we are truly committed to multilateralism.

So I would urge all members to consider how we can creatively improve the functioning of the organization.

We must ensure the WTO is as responsive to members' interests as possible — and that, working together, we can deliver the positive results that we all want to see. 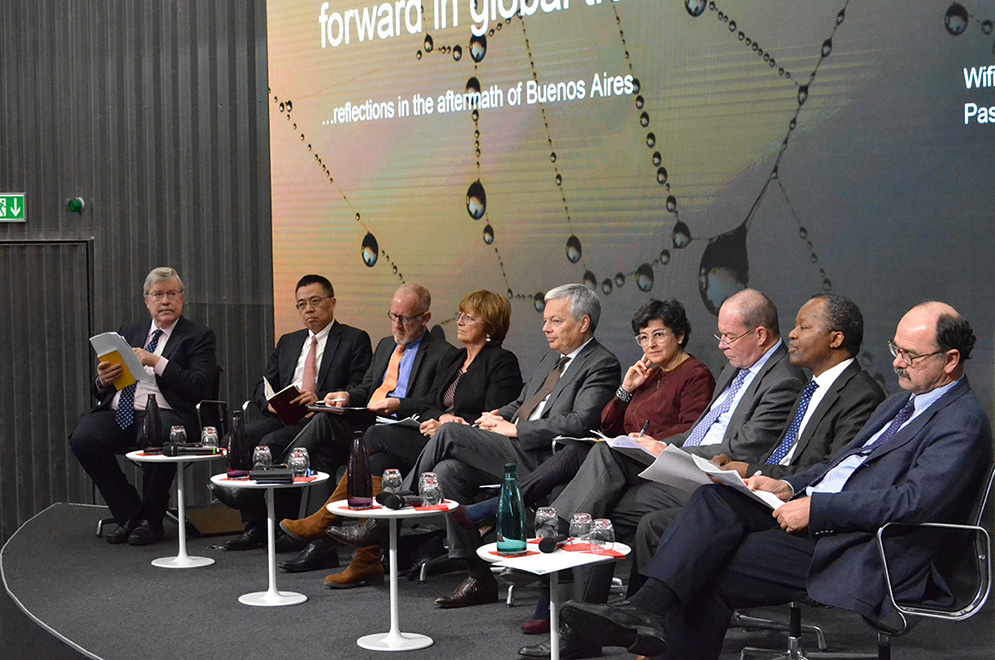